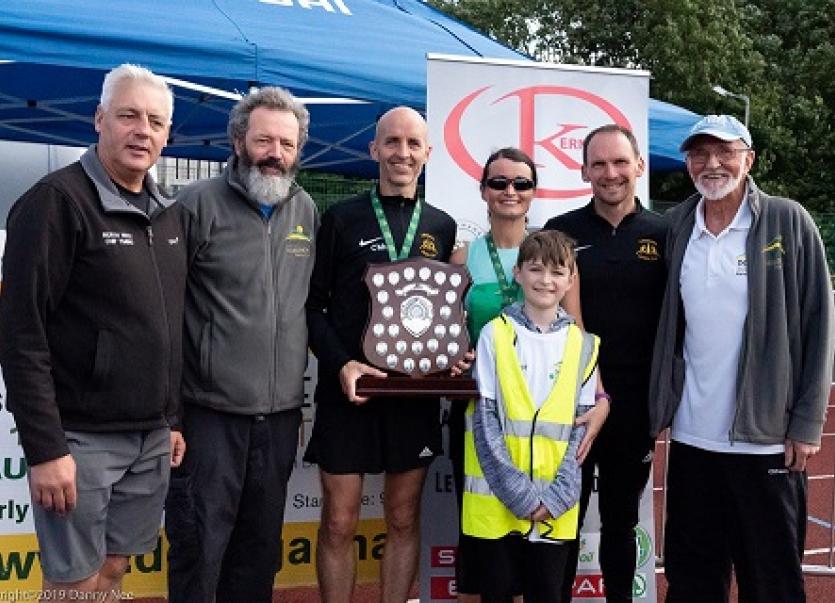 2019 Donegal Half Marathon winner, Ciaran McGonagle, pictured after being presented with the Dessie Larkin Perpetual Shield by Mary Larkin, and her son, Matthew.

Donegal Half Marathon race director, Brendan McDaid, has commended all those who played their part in the successful staging of Sunday's event in Letterkenny.
"There was a real feel-good factor associated with this year's race," he said.
"Over 100 people were involved in putting together the 2019 Donegal Half Marathon at the weekend. On behalf of the Donegal Half Marathon Committee, I extend a sincere thank you to the large team of volunteers, the Donegal Volunteer Centre, An Garda Siochana, the Red Cross, Optum, Aurivo, the staff and management at the Aura Leisure Centre, Donegal County Council, Watson Hire and Liam Doherty and to our main sponsors, Kernan's Retail Group. All of these groups and organisations went above and beyond the call of duty and thanks to their efforts, we were able top put on a top quality race," the race director added.
"There was a strong sense of community spirit around Sunday's race and that is something we as a committee are keen to hold on to and build on.
"Almost 430 people took part in this year's Donegal Half Marathon - that's an increase of just over 100 which we are really happy about. The feedback from the competitors has been extremely positive. The big interest in the relay section, which saw ten teams competing, also helped boost the numbers," he said.