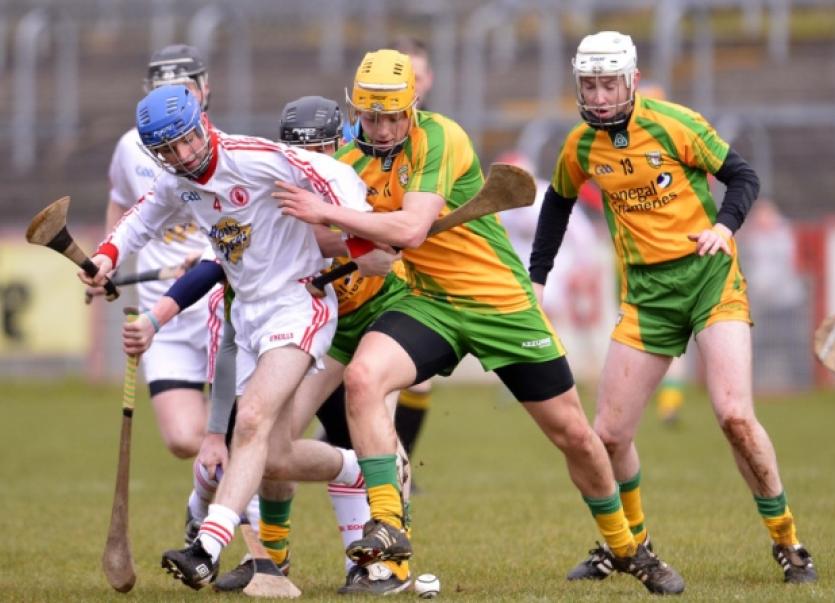 The meet for a third time in as many weeks on Saturday in O’Donnell Park, Letterkenny. (Throw-in 1 pm)

Those recent meetings were in a crunch Division 2B Allianz National Hurling League promotion/relegation play-off and it took 160 minutes of hurling before Donegal emerged winners to hold on to their 2B status for next season.

In the first of those meetings in Ownenbeg, at the beginning of the month, extra-time could not separate them after they game ended all square on 4-13 each.

Damien Casey, with a late close-in free, ensured a replay, after Lee Henderson had levelled it on 3-12 apiece with a dubious enough injury time free.

Donegal won the replay, in Celtic Park, seven days later with a four points victory, 2-16 to 2-12 victory - a tie that ebbed and flowed until Donegal pulled away late on.

“We know each other fairly well alright after those two games,” admitted Donegal manager Ray Durack.

“We know their strengths and weaknesses and they know ours. We got the measure of them the last day and I think playing in the higher division stood to us. I felt we got the better of them in the physical stakes and were that bit stronger than them.

“But we won’t be taking them lightly; we know what they are capable of. We gave away soft goals against them in the two games and that is something we are going to have to tighten up on this weekend.”

Donegal warmed up for Saturday’s showdown with a challenge game with Meath senior club Kildalkey at the weekend as part of a training weekend at Johnstown House in Meath. The Donegal manager claimed this was a good workout against a strong club team that contained a number of Royal County senior players.

Donegal ended up winning the game by five points.

Wing back Niall Cleary, who missed the replay victory over the O’Neill County due to club championship commitments in his native Offaly, is set to return to the Donegal line up.

However, midfielder Paul Sheridan, who sat out most of the league with a shoulder injury, is still a couple of weeks away from a return to action.

The news on defender Martin McGrath is much better. The experienced Burt man, who missed the entire league campaign, is back in training and is expected to play some part in Saturday’s encounter.

Otherwise with Sean McVeigh, man of the match in the Celtic Park replay, back from Hungary, Donegal- with the exception of Sheridan - are at full strength.

“We are in good shape and the boys are all fired up and looking forward to the game and doing well in the Nicky Rackard,” insisted the Donegal boss.