Kelly third in Monaghan behind the Moffett brothers 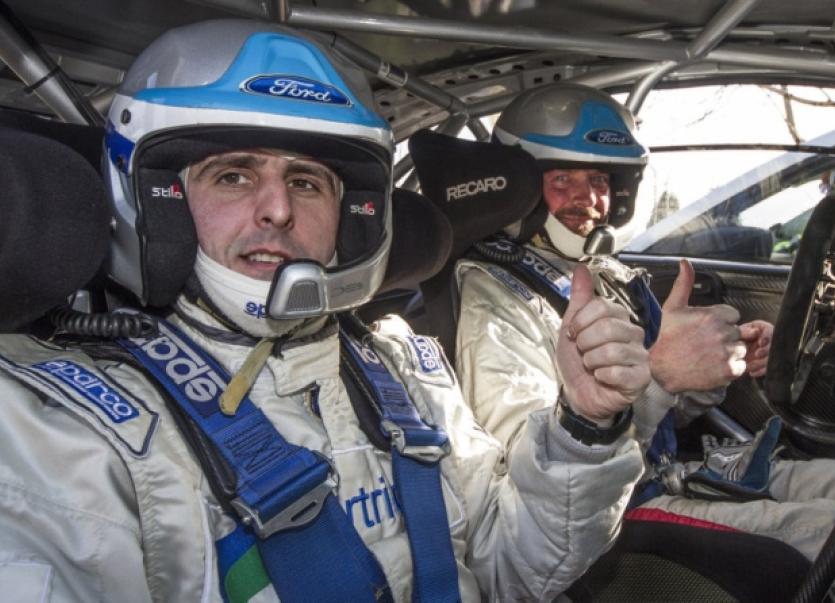 Donegal driver and Triton Showers National Rally Championship leader Donagh Kelly, had to be happy with a third place finish at the end of the Monaghan Stages Rally.

Donegal driver and Triton Showers National Rally Championship leader Donagh Kelly, had to be happy with a third place finish at the end of the Monaghan Stages Rally.

Kelly in his Ford Focus WRC with Kevin Flanagan calling the notes, finished 7.8 second behind second placed former Donegal International winning combination and local crew of Sam Moffett and James Reilly in Fiesta WRC. The rally was won by Josh Moffett and Jason McKenna also in a Fiesta WRC.

Kelly, fourth at the end of the first stage, led the rally after posting the fastest time on the short second stage. But he was relegated to second place at the end of stage 3 with Josh Moffett taking the lead. Out on the repeat loop of three stages the battle for supremacy intensified – Josh Moffett was quickest on Stage 4, Kelly was the best driver through Stage 5 and Sam Moffett set the pace on Stage 6.

Josh Moffett arrived at the final service halt with a damaged front left wing: “I was off the road after a crest and I was very lucky to get away with it.” Despite the indiscretion, the Monaghan driver led his brother Sam by 8.8 seconds with Kelly 1.6 seconds further behind in third. The Triton Showers Championship leader opined: “That final stage of the loop is a real Fiesta stage and of course the Moffetts live there as well.”

Leader of the rear wheel drive category McPhillips was untroubled as was his rival Declan Gallagher, albeit for a slight overshoot on S.S. 6. The top ten was completed by Jonathan Pringle (Escort) and Roy White (MG ZR). In Group N, Martin Doherty was 3.2 seconds in front of Pat Kirk, also in a Mitsubishi. John McQuaid (Escort) crashed out on S.S. 5.

On the first stage of the final loop (S.S. 7) Sam Moffett cut the deficit to just three seconds with Kelly 10.2 seconds further adrift in third. Josh gained four tenths of a second on the penultimate test where Kelly was quickest. On the final stage Josh Moffett set the best time to clinch victory with Sam Moffett and Kelly completing the top three. As neither of the Moffett brothers registered for the Triton series, Kelly took maximum points and also the three additional points for the Power Stage as he extended his lead in the series

Meanwhile Ardara driver Declan Gallagher won the Modified section in his Toyota Starlet after his rival and long time category leader Gary McPhillips crashed his Escort on the final corner of the final stage.

The Triton Showers Drive of the Day was won by Jonathan Pringle/Martin Byrne (Ford Escort) and the Group N category was won by Martin Doherty/Conor Foley (Mitsubishi).