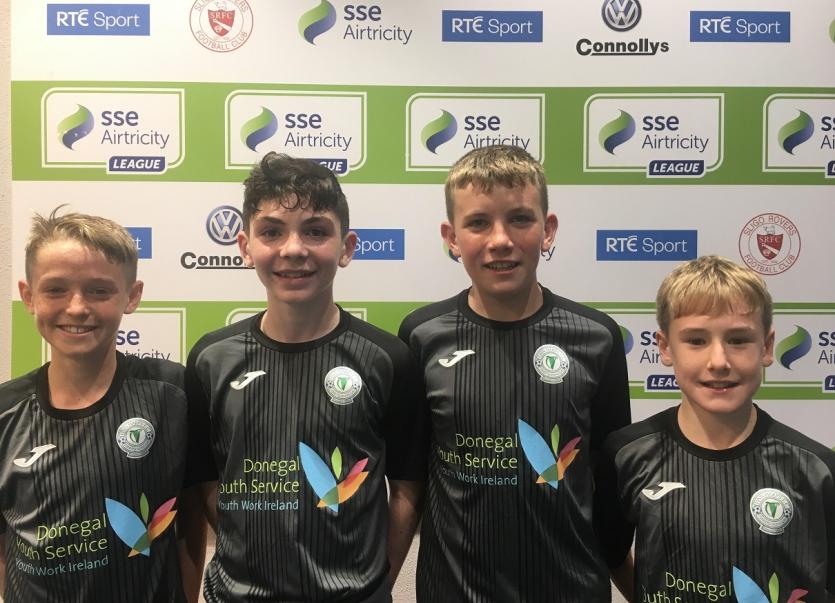 Finn Harps U-13s took all three points in the top of the table Northwest derby against Sligo Rovers on Friday night.

The result sees Kevin McHugh’s boys extend their lead on top of the group with two games remaining. The U-13s will play their final regular season home game next weekend when they host midlanders Athlone Town.

Friday night’s game was played at the Sean Fallon Centre in Sligo and it was a relentless first half display from the young Harps that set up a comprehensive 5-2 victory.

The opening stages were played at a frantic pace as both sides set out their approach early on, though it was Harps who were getting more joy and worried the home side with a number of dangerous corners from Liam Carlin.

The visitors broke the deadlock in the 9th minute when Adam McDaid threaded a pass through to Tiernan McGinty, down the left hand. The winger fired in a low cross to Conor Kelly who steadied before powering a shot past Finn Conway.

The advantage was doubled shortly after with a goal of the season contender from McDaid. Shaun Patton showed tenacity to win the ball off the Sligo full-back before laying off to McDaid who delicately lobbed Conway with a first time strike from all of 25 yards out.

Harps added a third just before the half hour mark when substitute Luca Barrett released McDaid. His snapshot was saved by Conway however sharpshooter Patton was on hand to fire in the rebound.

A ruthless Harps extended their lead further just minutes later. A deep cross from the right by Darragh Coyle was controlled by Patton who found his shot blocked by a recovering Sligo defender. But McGinty pounced on the loose ball to drill the past Conway.

The hosts began the second half with less fear, searching for a way back into the game and they were rewarded with a long range Dara Moysten goal. The midfielder found space outside the Harps penalty area before trying his luck with a high strike which sailed over keeper Killian Hagan.

Sligo could sense a chance of getting back into the game and Owen Elding burst in from the left side only to see his low shot denied Hagan.

Harps restored their four goal lead midway through the second period. Great endeavour from Patton saw him steal the ball of the Sligo centre half Eli Rooney to go through 1-on-1 with the keeper. The ex-Drumkeen Utd forward made no mistake casually stroking the ball past the onrushing keeper for his second of the game.

With ten minute remaining Sligo pulled another goal back. Elding profited from a loose pass from Ciaran O’Kane, with the winger driving into the box before squaring a ball to Paul Flynn, who’s first time strike arrowed past Shane Adair.

Flynn could have added a third Sligo goal in the last five minutes of the game. However, Adair was on hand to make a smart save when the midfielder got free in the Harps area.

The U-13s will play their final regular season home game next weekend when they host midlanders Athlone Town.