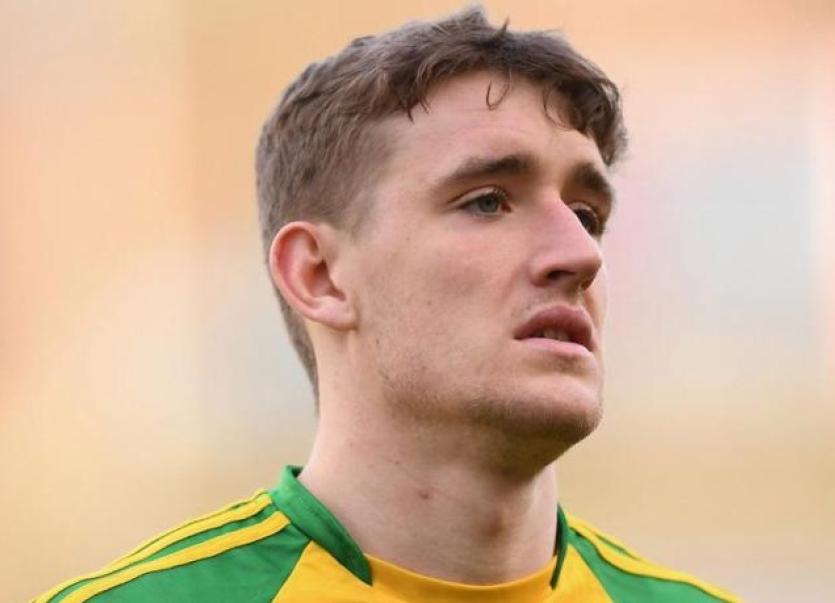 Hugh McFadden - a leader for Killybegs

Goals win matches and can turn matches in a heartbeat as Killybegs took a big step towards promotion in a hard- fought affair in Fintra.

This feisty affair was finally settled in the 62nd minute when Killybegs towering full-forward Paul Cunningham palmed the ball to an empty Glen net after a flowing move from the home side, who played the last 20 minutes minus wing back Ryan Carr, who was sent off on a second yellow card by referee Mark Dorrian.

On balance they deserved their victory against a battling Glen who never yielded.

County star Hugh McFadden was back to his best and was a huge influence for the winners, but some of the Glen contingent enthusiastically felt that he got a few “kind” frees.

Young Michael Gallagher and Ryan Cunninhgam were also key figures in this win against a Glen side who battled well and had three very good goal chances which shaved the crossbar.

Aaron Doherty, in patches, Paddy Byrne and Ryan Gillespie led their charge but they were always chasing the game after a highly fortunate goal for Killybegs which effectively changed the course of the game.

For Lady Luck must have been wearing a red jersey when Hugh McFadden’s half hit shot unsettled Glen keeper Pauric O’Donnell and crept inside the near post in the 18th minute.

McFadden’s goal turned this encounter on its head and was a real sucker punch for a lively Glen side who had been leading 0-4 to 0-3 thanks to a lively opening 15 minutes.

Killybegs had taken the lead for the first time at 1-3 to 0-4 and a revitalised McFadden added a point from a free to turn this match around.

From there to half-time, Glen were not able to get over that killer blow although they could have had two goals as Ronan Gillespie blasted over the bar when a goal looked on.

And Aaron Doherty speared through the centre of the Killybegs defence only to see his rasping shot skim the crossbar as the home side went into a 1-8 to 0-7 lead after an entertaining opening half hour.

Glen were assured of their status from Friday night, but showed that they meant business as they sprinted to an 0-3 to 0-0 lead after just five minutes.

Christopher Byrne, Paddy Byrne and Ryan Gillespie were swiftly on target before the home side could draw breath.

The accurate Mickey Gallagher got them off the mark after five minutes after a good pass from the hard-working McFadden.

Ryan Cunningham, playing his first match since a two-match ban, narrowed the gap to the minimum.

Killybegs had the benefit of a freshening breeze for the second half, but two quick points from Doherty and Gillespie narrowed the gap to Killybegs 1-8 Glen 0-9.

But Glen were just not able to get any closer as three snappy points from McFadden and Cunningham pushed Killybegs to a 1-11 to 0-9 lead.

To their credit Naomh Columba battled bravely and Doherty and Gillespie got points which could easily have been goals.

Killybegs now look forward to a tough last match against Termon in the Burn Road and will be heartened as Aodh Ruadh and  St Nauls drew in Mountcharles.