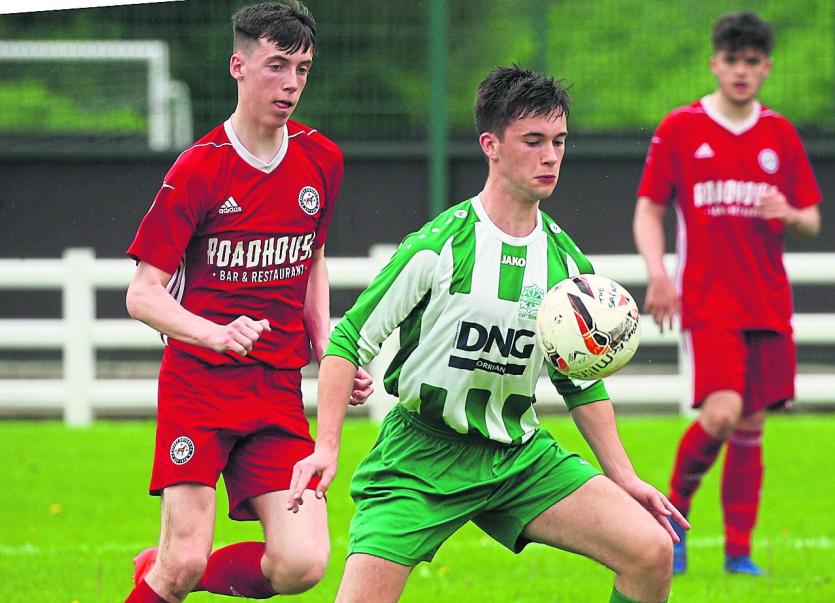 The Area Shield finalists in the Brian McCormick Sports Cup have all been confirmed after a busy weekend of cup action in the Donegal League.
The Area Finals will be played next Sunday with the action in the new Saturday League season also getting underway.
Here's a round-up from the weekend cup action.

Kildrum Tigers . . 3 Castlefin Celtic . . 1
After a scoreless first half Damien Crossan gave Kildrum the lead from a Ryan Higgins pinpoint assist.
Celtic didn’t take long to level things up, Ronan Tourish with a brilliant effort and, after Lynch couldn’t hold, Shane Gallagher made no mistake from close range.
Substitute Gary Crossan smashed Kildrum back in front with his effort from the edge of the box, before Mc Hugh sealed Kildrum’s win in the final minutes.

Glenea United . . 3
Keadue Rovers . . . 2
Glenea opened the scoring in the 5th minute when a well worked move between Shaun Curran and Ryan Tannahill ended up finding Ciaran Mc Geady who shot home.
Within three minutes the score was level, Keadue floated a 30-yard free onto the head of Greene who beat the keeper from the edge of the 6-yard box.
In the 53rd minute Keadue took the lead, Shaun Boyle picked up a loose ball and let fly from 30 yards.
Ten minutes later it was all level again when Luke Mc Carry crossed for Darren Doogan to head home.
The game looked destined for extra time until Ryan Tannahill created space on the wing and managed to find Sean McBride who calmly slotted home to give Glenea the win.

Kilmacrennan Celtic . . 2
Gweedore United . . .0
From the start Kilmacrennan dominated possession but found it hard to break down a resolute Gweedore side/
The breakthrough finally came in the 30th minute when Enda McCormack played a great through ball to Mark Friel, who missed his one on one after some excellent goalkeeping. The ball however fell to Michael McLaughlin who slotted home.
Gweedore did have a chance to level the score after some poor Kilmacrennan defending but Shane Graham was equal to Ciaran Mc Fadden’s shot.
Kilmacrennan should have doubled their lead before half time when Enda McCormack missed his penalty after Ryan Shields was fouled in the area.
But they got the second mid-way through the second half when Mc Laughlin got his second, heading in a a great cross from Terence Shiels.

Ballybofey United . . .1
Both teams started brightly but Donegal Town were dealt a serious blow with Stephen Graham receiving his marching orders after only 13 minutes.
Both teams created good chances throughout the 90 minutes with both Glackin from Ballybofey and Stitt from Donegal Town squandering good chances.
Ballybofey took the lead through Jude Patton on the stroke of half time in the first half of extra time following indecision in the Town defence.   Donegal to their credit battled gamely but Ballybofey qualified for the Area Final where they will meet Cappry Rovers.

St. Catherines . . . 1
Cappry Rovers . . . 5
There was little to separate the teams in the first half hour with chances at both ends. Cappry grew stronger and stronger as time progressed and Paddy Mc Nulty was rewarded for his hard work and opened the scoring on 35 minutes.
The floodgates opened then as Cappry showed their experience. Two more goals from Mc Nulty gave him his hat-trick. Two further goals for Cappry came from Jamie Murray and Aaron Kelly which gave the visitors five in total.
A very young home team plugged away and were rewarded with a consolation goal through Andrew Mc Morrow. Best for the home side was Niall Campbell and shining brightly for the visitors was Paddy Mc Nulty.

Drumoghill F.C. . . 0
Aiden Mc Laughlin for the home side came close on four minutes when he headed over from a Drew Connelly cross.
The home side took the lead on sixteen minutes when Aaron Wasson broke down the right and he played the ball through to Daniel Stolarczyk and he hammered home from the edge of the box.
The visitors went close to equalising through Jason Doherty and then Charles Rodgers.
But the home side made it two nil on thirty-five minutes when Aaron Wasson broke clear of the defence and he was brought down outside the box by the keeper who was shown a red card.
Richie Moore went into goal but Daniel Stolarczyk fired home from twenty-five yards.
Drumoghill dominated the lclosing period and Carr in the home goal made three great saves from Ronnie Carlin and two from Jason Doherty to secure the win.

Whitestrand United . . 6
Lagan Harps . . 1
Whitestrand's first goal came when Darren Ferry turned on a loose ball on the edge of the box and calmly slotted home. They doubled their lead mid-way through the first half when Liam O’Riordan crossed and Aaron Curran converted.
Whitestrand extended their lead early into the second half when Aaron Curran continued his superb early season form and slotted the ball into the bottom corner. They scored again when Ronan Morris converted before Kevin Loughrey got in on the act when he was put through and he placed it past the outrushing keeper.
Lagan got a consolation goal when they scored a free kick but Whitestrand scored their sixth and final goal when Mark Peoples took his goal very well.