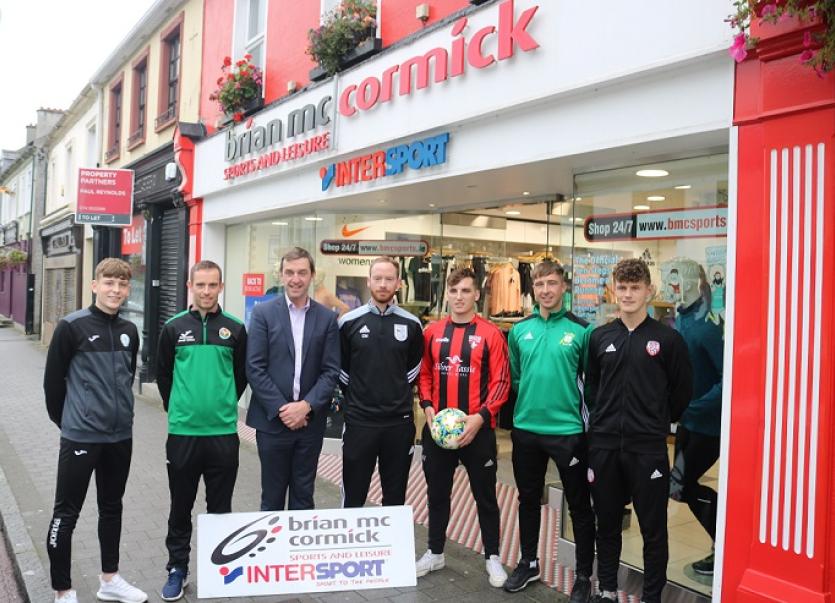 The new USL season was officially launched at Brian McCormick Sports & Leisure in Letterkenny on Tuesday evening with managers and players from clubs in attendance.

A new sponsorship agreement with bmcsports.ie was recently announced and the first taste of League action takes place on the weekend of Sunday, September 29.

Bonagee United will host Fanad United at Dry Arch Park, while Derry City Reserves are at home to Finn Harps Reserves in the other week one fixture.

"We welcome bmcsports.ie on board as our new sponsor and we look forward to working with Brian," said Ulster Senior League Chairman Johnny McCafferty.

"Hopefully it will be a successful venture for the League and for Brian."

Brian McCormick Sports & Leisure was established in 1995 and the store has been a fixture on Letterkenny Main Street since.

bmcsports.ie offers a unique team wear range of clothing for all leading brands, ensuring clubs can be kited out with quality team wear. bmcsports.ie have their own embroidery and printing service in-store to ensure swift production of order

"A lot of clubs here are very successful clubs. Football clubs are all about service and getting gear the way you want it - and that's what we're trying to achieve.

Cockhill have won the last seven Ulster Senior League crowns, but manager Gavin Cullen is expecting to have to fight all the way to retain the crown.

"The league is competitive," Cullen said.

"Teams have strengthened and brought players in.

"Every team in this league is well capable of beating the next and that augers well for the season. Every game we take to the field we know we have to be at ourselves to get a result."

Letterkenny Rovers won the Donegal News USL League Cup last season and manager Eamonn McConigley is hoping his men can mount another challenge to the champions.

"If we can get the squad settled down, we'll be as strong as we were last season," he said.

"We had a few bad results along the way last year. Every game has to be a result in this league because if it's not, you're playing catch-up."