Donegal to celebrate 50 years of Scór with special concert

Groups and performers to take part in celebration event 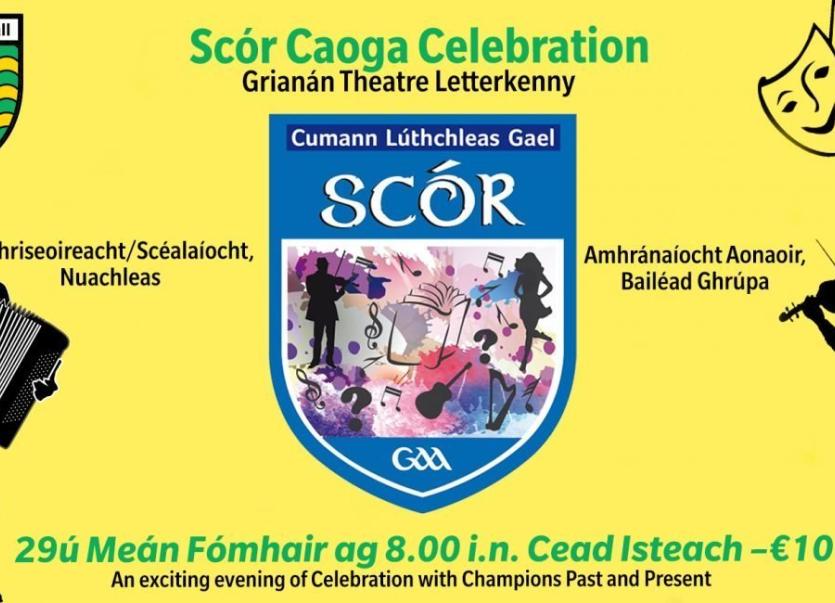 Fifty years of Scór to be celebrated in Letterkenny at the end of September.
The records show that the first Ulster title was won by Donegal in Scór na nÓg in 1973 when Gaoth Dobhair won the recitation category.
The first All-Ireland success for Donegal dates back to 1980 when the Harpur family from Robert Emmet’s won the instrumental music.
What differentiates the GAA from all other sporting bodies is that it aspires to be much more than a sporting organisation. Part of the ethos of the GAA is the preservation and promotion of our native pastimes, culture and language.
When Derry Gowen from Cork and others came forward with the idea of Scór, approved by National Congress in 1969, they created a vehicle for the GAA to give expression to those aspirations. Over the last 50 years clubs from all corners of Ireland have called on members, young and old, to represent their clubs and to do so in competitions that produced the highest standards of music, song, dance and drama. Just as our games are preserved through competition, so too is our culture.
In this, the 50th Year of Scór, GAA officials here in Donegal are renewing their appeal for more Donegal clubs to take part in Scór this year.
Date for the diary: CLG Dhún na nGall 50th Celebration Scór Concert in association with Donegal County Council.
Dáta: 29ú Mean Fómhair 2019
Ionad: Grianan Theatre, Leitir Ceanainn
Am: 8.00pm – 11.00pm
Cead Isteach: €10.00

Ceolchoirm – An chead leath
Nuachleas: Gaoth Dobhair All Ireland winning Leiriú from 2017 in Belfast with their historic piece about Niall Mac Giolla Bhríde from Creeslough who wrote many songs and recitations in Irish and English including Noreen Bawn and Mo Chó beag ag bun Cnon a’ Tí. It is noteworthy that this is the first ever all Irish novelty act to win an All Ireland in Scór
Grúpa Bailéad: Na Gleanntaí (Naomh Conaill) All Ireland champions from 1992 Scór na nÓg
Amhránaíocht Aonaoir: Zara Laughlin – Na Rossa who won several county titles in solo singing and recitations, prepared ballad groups for Scór na nÓg and has adjudicated at county and provincial level.
Aithriseoireacht/Scéalaíocht: Pat Sweeny – Aodh Rua B.A.S. All Ireland champion from 1991 in recitation which took place in Threemilehouse, Monaghan
Bailéad Ghrúpa: Roibeard Eiméid – Scór na nÓg group. The Harpur family represented Robert Emmets and won Ulster and All Ireland titles in 1980 and 1982. Robert Emmets will be represented by the current county champions in Scór na nÓg.
Nuachleas: Gaeil Leitir Ceanainn won the Léiriú Ulster final in Silverbridge with their piece Paddy McNamee. This is a must see novelty act about two Donegal lads in Dublin for the first time for the All Ireland football final in 1992.
Leath ama: A draw will take place at half- time with all money from the draw going to a Donegal charity.

Ceolcoirm An dara leath
Nuachleas: Gleann tSúilí who won the Scór na nÓg All Ireland in Athlone in 2008. Gleann tSúilí have competed in Scór for many years and in truth should have won more than one All Ireland in the Nuachleas category
Amhránaíocht Aonair: Conor Ó’Gallchóir a bhain craobh Uladh san aithriseoireacht sa bhliain 2017. Bhain An tAthair Seán Ó Gallchóir as Cloich Cheann Fhaola a bhain craobh na hÉireann san aithriseoireacht/scéalaíocht i 1982
Bailéad Ghrúpa: Naomh Adhamhnáin who won the Ulster final in 2001. This group also won 11 county titles over a 12 – 13 year period and it is great that they will be part of the concert
Iorras instrumental group who have participated in scór for many years and won several county titles in Ceol Uirlise
Aithriseoireacht/Scéalaíocht: Noel Ó Gallchóir All Ireland champion in recitation in 1981. Bhain Noel sa bhliain 1981 do Ghaoth Dobhair agus i 1982 bhain a dhearthar, an tAthair Seán Ó Gallchóir do Chloich Cheann Fhaola
Amhránaíocht Aonair: Caitríona Solan (Doherty) who won several county titles and the Ulster title in solo singing in 2017 in addition to adjudicating at county, provincial and All-Ireland level. Caitríona will be accompanied by her sister Bríd Solan
Bailéad Ghrúpa: Gaoth Dobhair who won Ulster titles in 2012, 2013 and 2015 will bring the concert to a close.

All clubs and GAA members are asked to support this concert and charity draw.