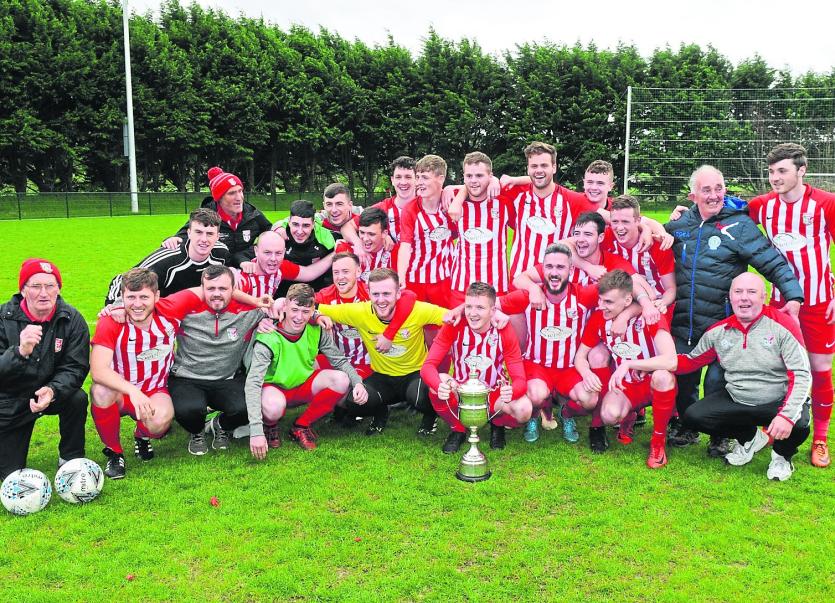 Keadue Rovers - winners of the Brian McCormick Cup last season. The Rosses men were knocked out of this year's competition by Glenea United

There will be a new name on the Brian McCormick Sports Cup by the end of this season after cup holders Keadue Rovers were beaten in their Area semi-final last weekend.
The Central Park outfit were beaten 3-2 by Glenea United who will meet Kilmacrennan Celtic in the Gweedore Area Final on Sunday.
That's one of four Area Finals taking place this weekend - and all four games promise to be intriguing affairs.
Division Two side Raphoe Town have really caught the eye on their way to the Area Final in Lifford and they'll be hoping for a cup upset when they meet Kildrum Tigers on Sunday.
In the Donegal Area, there will be a Twin Towns derby with Ballybofey United up against Cappry Rovers.
Both sides were impressive winners in their semi-finals last weekend.
And in the Letterkenny Area, newly promoted Bonagee United will be fancied to beat Division Two outfit Whitestrand United.
That said, Strand have enjoyed an excellent run in the cup and they beat Milford United - last year's beaten finalists - in the opening round.
Meanwhile the opening series of matches in the Donegal Saturday League will be played this weekend.
Strand Rovers will begin the defence of their Glencar Inn Division One title with a home fixture against Donegal Town.
Glencar Celtic, who beat Strand in the final of the Voodoo Venue Cup last season, will surely be one of Strand's main challengers for league success this season. They're away to Glenea United in their opening game.
Elsewhere Arranmore United play Keadue Rovers and Fintown Harps meet Milford United.
There are five games fixed in Division Two.
Meanwhile the new Sunday league season begins on Sunday week, Sept. 15.