A preview of this weekend's opening series of games 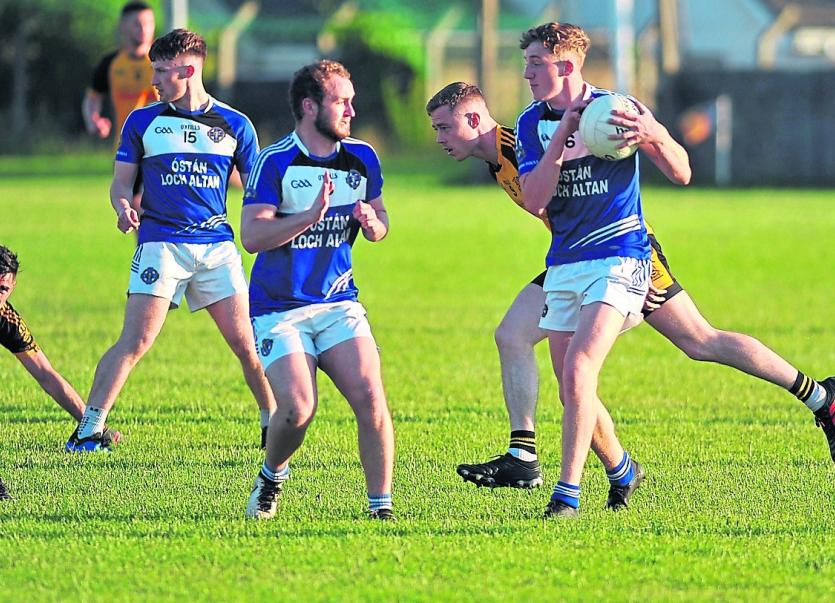 Cloughaneely, in action here against Bundoran in Division One this season, are among the early favourites to win the Intermediate Championship in Donegal

Cloughaneely, Aodh Ruadh, St Nauls and Naomh Columba are the early favourites to win this year’s Michael Murphy Sports and Leisure Intermediate championship which throws-in this weekend.
They are the leading contenders for the Cathal McLaughlin Cup in the opinion of Liam Breen, the man who guided Glenfin to a third Intermediate championship success last season. Glenfin defeated Aodh Ruadh in last season’s decider.
“Overall when you look at the teams and go through the groups, Cloughaneely, Aodh Ruadh, St Nauls and Naomh Columba are the teams that will be in contention when it gets down to the business end,” explained the Glenfin club man.
“Cloughaneely have played in Division One for the last two seasons and they have retained their status again this season,
“We played them last year down in Falcarragh and we caught them on the hop. I think that will be great motivation for Michael Lynch (Cloughaneely manager) and the players.
“We beat Aodh Ruadh in last year’s final and they have been knocking about the later stages for the last few years.

“They are going into the championship on the back of a good Division Two league campaign and were a bit unlucky to miss out on promotion to Division One.”
Making a case for St Nauls and Naomh Columba, Breen also feels playing in a competitive Division Two, and in the case of St Nauls just missing out on promotion, puts them in a good place ahead of the championship.
He also acknowledges championship football has a habit of throwing up a surprise or two. And for that reason previous championship winners Naomh Colmcille, Burt, Naomh Muire, Downings and Naomh Ultan wil all need to be watched.

Three groups
There are three groups in the Intermediate Championship. The top two from each of the groups qualify for the quarter finals.The remaining two last eight places are taken up by the two best placed third teams.
This leads to three teams from two of the groups making the quarter-final with the remaining group providing just two qualifiers.
“I believe Group A will produce three qualifiers in Cloughaneely, Red Hughs and Naomh Brid,” Breen said.
“I fancy Naomh Brid to win their three games. I think the crunch tie in this group is the game between Red Hughs and Naomh Brid in Ballintra to decide the automatic second quarter-final place.
“Naomh Ultan had a tough league season though they were a bit unlucky not to avoid relegation to Division Four. They lost out on score difference to Naomh Colmcille.
“Naomh Ultan have a good championship pedigree and are capable of causing an upset.
“I fancy Aodh Ruadh and St Nauls to take the top two places in Group B though I expect Naomh Muire and Downings will make it difficult for them.
“Naomh Muire had a very disappointing season and were relegated from Division Three. But they will have a number of players back from America and they have a good pedigree in the championship.
“Downings were last year’s Junior A champions. They had a good league and were promoted to Division Two. But the draw has been unkind to them. They are away to both Aodh Ruadh and Naomh Muire.”
Liam Breen is also feels this group looks the most likely to produce only two qualifiers. In that scenario Naomh Muire and Downings would miss out.
Of the three groups the former Glenfin manager and player feels Group C is the most open.
“I fancy Naomh Columba to top the group. They have a lot of good young players and they have been playing in Division Two while the other three teams are all playing in Division Three.
“I believe Gaeil Fhánada will take second place with Burt and Naomh Colmcille battling for the third qualifying spot. Burt were going well and were leading the Division Three league table but they had a poor finish and missed out on promotion.
“Naomh Colmcille had a poor league and just about survived on score difference ahead of Naomh Ultan. I see Burt have to go to Newtown which makes it a little more difficult. But with the hurling over I expect Burt to come through to take the third qualifying place.”