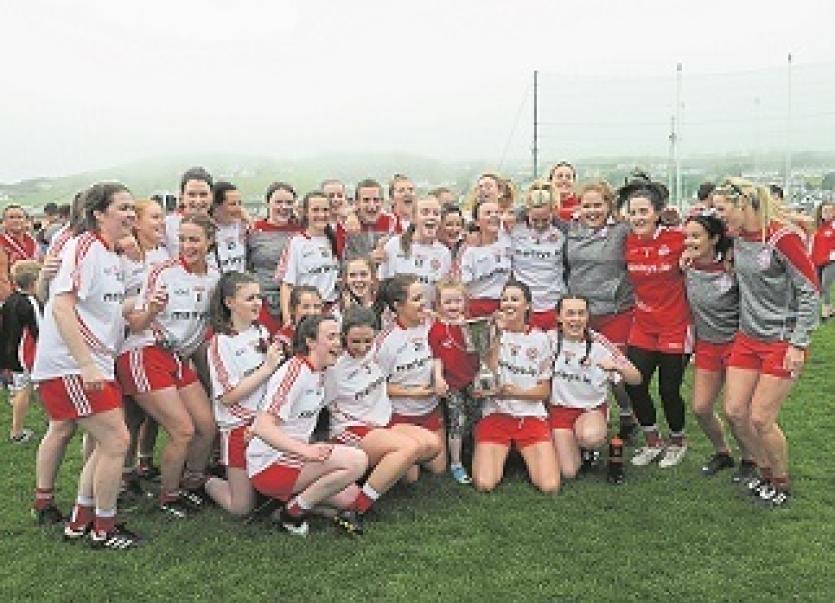 Five years ago, on a cold December day, Termon and their terrific captain Geraldine McLaughlin walked in the shadow of Paradise, when they defeated Mourne Abbey of Cork in the All-Ireland Ladies Club final.
Geraldine, the Maradona of her club, hit an incredible 3-8 from full-forward and she was playing alongside one of her icons, the legendary Maureen ‘Mo’ O’Donnell.
Mighty ‘Mo’ is still playing and cajoling her team-mates from the nets.
And a happy Geraldine famously quipped that it would be a ‘Bank Holiday for a week in Termon’ after leading her team to glory.
Five years on, and McLaughlin is still the beating heart of her team, with good support from her sister Nicole and Roisin Friel, as they face up to perennial rivals Glenfin in the county final in Ballybofey on Sunday in Sean MacCumahill Park at 5pm. Times have changed for Termon in the interim, and they are missing 12 of that famous team and have not won a county title since 2015.
They did overcome Glenfin in the Donegal Gaeltacht final and once again Geraldine was the star of the show, posting 1-10 in a pretty youthful team.
But the very grounded Geraldine is reading nothing into this victory.
“I would not read too much into that win-it is always good to win a Gaeltacht title, but the championship is totally different, and we just know that Glenfin will bring a huge challenge on Sunday,” she said.
“It will be totally different in Ballybofey on Sunday.
“Both of us qualified after a round robin with Moville. We have not won a championship since 2015.
“We only have around 12 of the squad that won the All-Ireland club title five years ago through girls travelling and retirements.
“It is a brand new team with a lot of younger girls coming through.
But one feisty lady who is not going away any time soon is Maureen O’Donnell who is leading her troops from the goals.
“Mo is still in goal and she will always keep you right,” Geraldine said.
“She is great as she will play anywhere. Her kickouts are very good and it gives you an advantage. She is just as good in nets as she is outfield”.
So where will the threats come from the reigning champions Glenfin who beat Moville in a thrilling final last year by 4-7 to 3-7?
“They are the reigning champions and they have Katy Herron, Karen Guthrie, Anne Marie McGlynn and Grainne Houston and they will be very determined to retain their title,” McLaughlin said.
“Glenfin have a lot of physical power even without Yvonne (Bonner) and they have a tremendous fighting spirit.
“And they have some good young players coming through”.
But Termon will not lack hunger. They have a proud tradition in Donegal football and will be determined to go all the way with a relatively young team.
“We have been beaten in a lot of semi-finals and even though we have a few niggles, we have a good strong panel and the training has been going very well.”
On paper, Glenfin’s experience and recent success would make them pre-match favourites.
But hunger is a sure sauce for a proud club like Termon who are hoping to get back to winning ways.