St Michael's lay down a marker with big win in Ardara

Plenty of goals in Group A clash in Kentucky 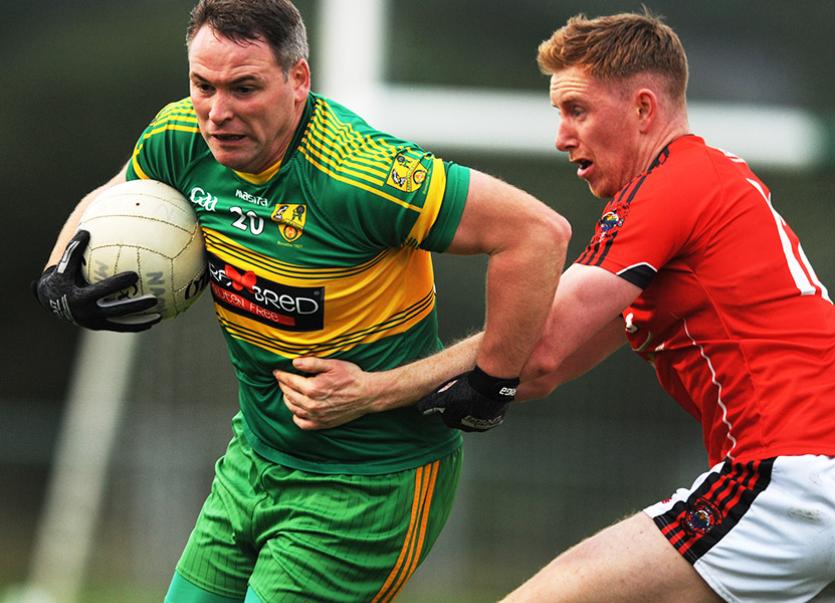 Ardara on the attack against St. Michael's on Saturday night PICTURE: MICHAEL O'DONNELL

It is not a good idea to poke the bear, and class is always permanent as impressive St Michael’s showed in this emphatic dismissal of youthful Ardara in Kentucky tonight.

Well  Ardara certainly poked the sleeping giant for eight minutes when they raced into a scintillating 2-3 to 0-1 lead.

But that lead was turned on its head as St Michael’s awoke and hit a sensational 3-7 without reply in one of the most remarkable turnarounds for some time.

They turned over leading by 3-10 to 2-5 in a game where poor kickouts from both keepers led to at least three goals in this cracking encounter.

Ardara, who fielded nine players under 22, took off like a rocket, aided by some poor decision-making from St Michael’s ex county keeper Mark Anthony McGinley.

Niall McCrossan, Johnny Sweeney and McCrossan again pushed them into a 0-3 to 0-0 lead.

McGinley hesitated and Robbie Adair pounced to get the first goal-just after St Michael’s lost Michael Gallagher to a black card in the 4th minute.

They led by 2-3 to 0-1 after eight minutes with Michael Langan getting the men from Creeslough/Dunfanaghy off the mark.

But with Christy Toye dominating midfield, and Colm McFadden landing points, the big comeback was on.

A bad kick out by Ardara keeper Cillian Gildea allowed veteran McFadden through and he found the net to begin a 3-9 scoring blitz.

Another poor kick out ended with the ageless Toye clean through and setting up Langan for a simple tap in, in the 13th minute.

Suddenly St Michael’s were leading by 2-5 to 2-3 and things only got worse for the home side.

The Ardara defence was looking increasingly suspect and Colm McFadden and Daniel McLaughlin combined to set up Andrew Kelly for the third goal in the  17th minute.

Ardara broke their scoring famine with late points from Adair and McCrossan as they trailed by 3-10 to 2-5 at the break.

The lights came on in Kentucky, but the darkness continued for Ardara as a much more powerful St Michael’s continued their leisurely dominance.

And the nippy Eddie O’Reilly grabbed the fourth goal to seal a fine victory for a team that sent out a firm message to all in Donegal!