A number of championship ties rescheduled on Saturday 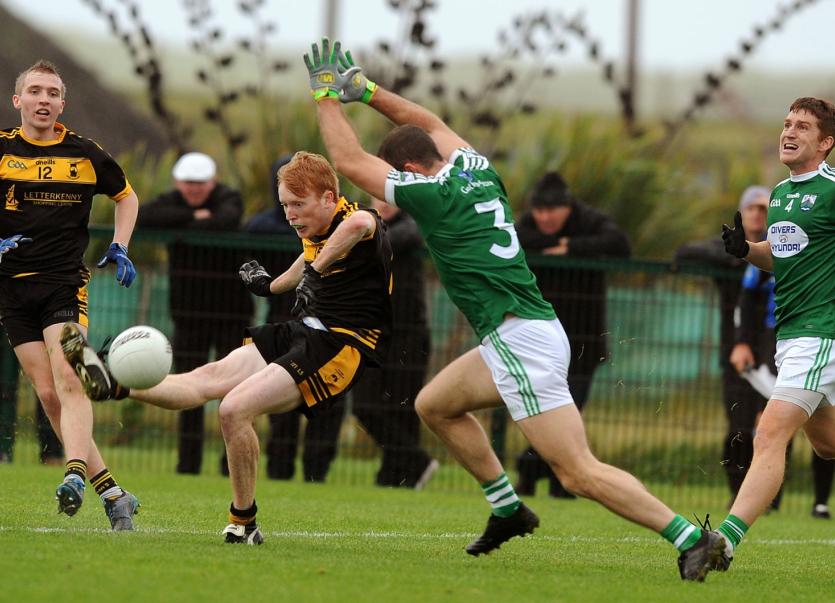 Action from Saturday evening's game in Magheragallon. The draw has left Gaoth Dobhair needing a good result this weekend in Dunfanaghy

Gaoth Dobhair manager Mervyn O’Donnell said Saturday’s crunch senior championship meeting at St. Michaels is a game his team simply can’t afford to lose.
The reigning Donegal and Ulster champions know that defeat at The Bridge will leave them in a perilous position in Group A.
And having enjoyed such a memorable 2018, crashing out of this year’s Donegal Senior Championship in the group stages is something few will have contemplated.
Gaoth Dobhair’s draw with St. Eunans in last Sunday night’s opening game has suddenly put real pressure on the Magheragallon outfit. Ardara, beaten at home by St. Michaels last Saturday evening, travel to Letterkenny to play a St Eunans side who know that a win for them will put them in a strong position in the group.
But all eyes will be on Saturday’s game in Dunfanaghy and manager O’Donnell knows what’s at stake.
“It’s a game we can’t lose, because if we do we are gone,” he said.
“A draw would not be the end of the road, but it would mean that qualification is out of our hands and in the hands of others.
“It is very simple, the boys know what they have to do and it is now a matter of getting ourselves right for the job in hand.
“We know that won’t be easy against a St Michaels side for whom it’s a last hurrah for a number of their senior players.”
Gaoth Dobhair have injury concerns over county men Dáire Ó Baoill and Odhran McFadden-Ferry after they picked up knocks last weekend.
“Odhran suffered a calf injury and Dáire suffered a dead leg so we are monitoring them closely this week and we are hopeful they will be fit for Saturday,” O’Donnell added.
St Michaels meanwhile, will be without former All-Ireland winner Martin McElhinney after he suffered a broken bone in his jaw following an accidental clash in the Ardara game.
He has been ruled out for the rest of the season following surgery in Altnagelvin Hospital.
The Group A game is one of three ties in the senior championship fixed for Saturday. Along with the Milford v Glenfin game in Group C, it has been brought forward to an earlier start time of 3.30pm  to avoid a clash with the All-Ireland final replay.
In Saturday's other game, Dungloe play Naomh Conaill in Group B at the original time of 6.30pm.

There's a change of throw-in time to the Junior Championship game in Group A on Saturday. Naomh Pádraig Leifear v Carndonagh will now throw-in at 8.30pm.