Championship preview: Another busy weekend ahead in Donegal Intermediate Championship

Aodh Ruadh against St. Naul's the game of the weekend 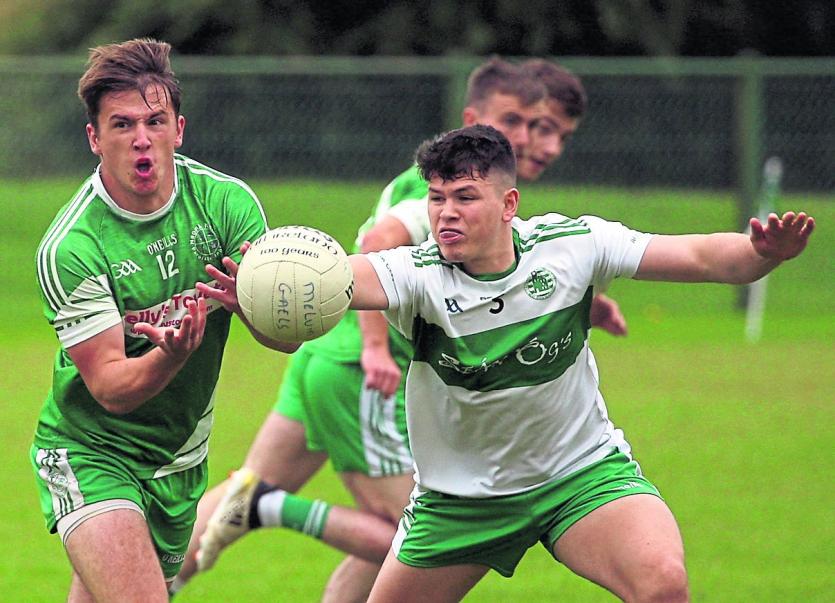 Peadar Mogan of St Nauls gives a pass as Aodh Ruadh's Colm Kelly closes in during the recent Division 2 game in Mountcharles. The two sides meet in one of this weekend's big games

The opening weekend of games in the Donegal Intermediate Championship last weekend served up plenty of entertainment, championship drama and close contests.
Going into this year's competition, the feeling was that any number of teams were in contention for honours. And after last weekend's games, it's hard to argue against that.
The three groups have four teams each with the 12 clubs vying for a place in the quarter-finals.
Here's what's in store this weekend:

GROUP A
Naomh Brid V Naomh Ultan
Sunday, 3pm
As derby matches go they don’t come any more attractive than this south Donegal battle.
Both clubs operate from a relatively small catchment area, but both have great fighting qualities.
Naomh Brid certainly tested Cloughaneely in their opening game last weekend, while Naomh Ultan are always best when under pressure.
It could be a battle of the marksmen between Cian Kennedy of Naomh Ultan and Darragh Brogan for Naomh Brid. Peter Alvey and Dermot Gallier are key figures for the Dunkineely side while Callum and Matt Gallagher (sons of manager Matt) add some power and panache
A diddicult one to call, but home advantage might just sway it for Naomh Brid.

Red Hughs V Cloughaneely
Sunday 3pm
Cloughaneely are fancied to go all the way in this competition after doing well to survive in Division One of the league.
This weekend they meet last year’s Junior A champions from Crossroads.
Home advantage is always crucical and the Stephen McMenamin, Gerard Melaugh, Peadar McGlinchey and Calvin Bradley-inspired Red Hughs will certainly not lack in confidence.
But they face seasoned opponents who still have the powerful Maguire clan, the elegant John Fitzgerald and Darren Ferry in a club with a number of dual players.
Naomh Brid almost shocked Cloughaneely last week, so that could have been the jolt they needed to boost their chances.
Red Hughs will bring plenty of skill and steel to the table, but it looks like Cloughaneely’s greater power and experience of playing at a higher level, will prevail.

GROUP B
Aodh Ruadh V St Naul’s
Saturday, 3.30pm
By a country mile this is the match of the day in south Donegal between two clubs with real ambitions of taking a county title.
Aodh Ruadh lost out to Glenfin in last year’s final.
They were reduced to 12 men in an otherwise rancour free encounter with Naomh Muire last weekend.
Niall Murray and Sean Taylor saw red, but it appears they will appeal the Cian Dolan matter as he appears to have been sent off on two yellows.
Dolan in particular would be a big loss against a St Naul’s side that are strong in central slots.
The Griffins, Daniel Brennan, Lee McBrearty and Brendan McCole give them a strong spine and they also have the talented Peadar Mogan and John Rose to spur their efforts.
Aodh Ruadh have been hit with injuries and will look to Eamon McGrath, Colm Kelly and Shane McGrath for inspiration, but it might be an away win.

Downings V Naomh Muire
Saturday, 6.30pm
Downings are reigning All-Ireland Gaeltacht champions and will be anxious to improve on their first- round display against St Naul’s.
They are at home in this all Gaeltacht affair against a Naomh Muire side who gained a last gasp draw against 12 man Aodh Ruadh last week.
Sean “Yank” Boyle is Naomh Muire’s scoring talisman and he is well supported by Padraig McCafferty, Adam O’Brien and Jack O’Donnell.
Opponents Downings will look to the scoring skills of Lorcan Connor, the McClaffertys, Keelin McGroddy and Oisin Boyce.
Both sides will be keen to get two points on the board and it could be a very close encounter.
Home advantage might just sway it for Downings.

GROUP C
Naomh Colmcille V Burt
Saturday, 6.30pm
The former Donegal and Ulster junior champions from in and around Newtowncunningham had a good start with victory over Gaeil Fhanada last weekend.
They are powered by Daniel Clarke, Willie Gillsepie, Matthew Crossan and William Lynch.
Burt ran Naomh Columba very close in Hibernian Park and were just edged out in the end.
Sean McHugh, Calvin Gallagher and the ageless Ciaran Dowds are all central to this dual club’s efforts.
Burt will be hurting from that home defeat and that might just carry them through in this derby affair.

Naomh Columba V Gaeil Fhánada
Sunday, 3pm
Those bounding young men from Glen came through a searching test against Burt last week and will be keen to continue in that vein this weekend.
Aaron Doherty, Ryan Gillespie, Paddy Byrne, Pauric Ward and Christopher Byrne are all big players for the team from the south west.
Opponents Fanad rely on the towering Michael Sweeney to win clean possession in the middle of the park while Mark McAteer is a key figure up front in the absence of Seamie 'Nannie’ and Seamie ‘Cosia’ Friel.
But, home advantage should be a big help for the men from Glen.