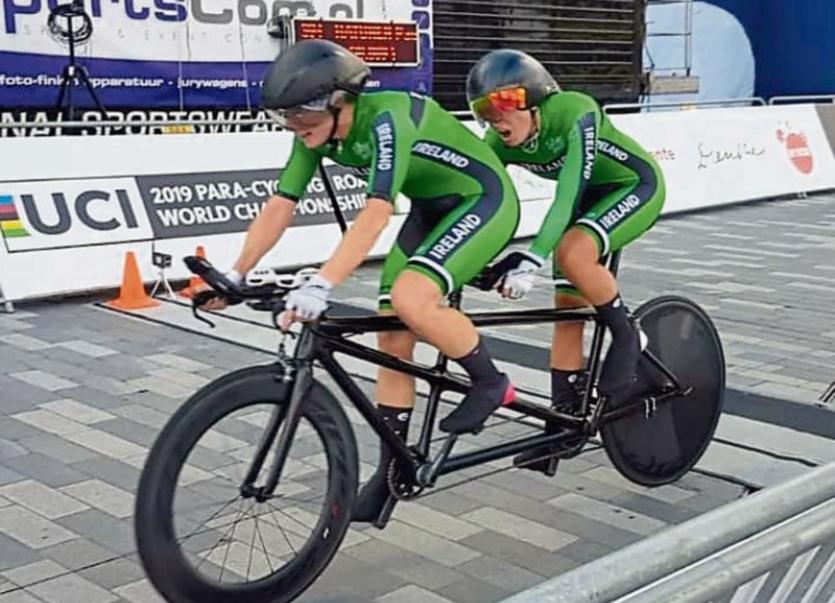 Will there be a better sporting performance in 2019 than Katie-George Dunlevy securing a third gold medal in-a-row at the World Paralympic Cycling championships in Holland at the weekend.

Along with her partner Eve McChrystal, the girl with Donegal connections, won a third Rainbow jersey to cement her position at the top of her sport in the world.

Cycling is a gruelling sport and winning world titles doesn't come without huge commitment and Katie-George has shown that in spades over the last number of years.

For those around Mountcharles, the native town of her father John, and in the wider cycling community around south Donegal, the most recent success is no surprise. Apart from winning goal in the road relay, the pair also secured silver in the road race.

Now it is onwards and upwards with the Tokyo Olympics the next big target, and the chance to retain the Olympic title won in Rio just over three years ago.

Katie-George and McCrystal have beaten allcomers over the last three years and as she arrived home on Monday last, there was relief as much as joy when contacted by the Donegal Democrat.

"It was brilliant. Just great relief to retain the title. We knew it would be close with new bikes in contention. New Zealand, GB and Belgium, but it was fantastice to win it for the third year in-a-row.2

“We had form coming into it from our previous results,” said Katie-George Dunlevy.

“I believed that we could do it, and I really, really wanted this one. I know Eve did as well."

They lost the road race narrowly to the Kiwis with Poland in third place.

However, there is no rest for Katie-George and Eve as they are taking part in a special race in Yorkshire this weekend, a race over 106km, which finishes in Harrogate. Highlights of this race will be shown on BBC.

"We are looking forward to that and it will be the longest race we have ever raced. There should be a good atmosphere. We train over long distances but we have never had the opportunity to race over those distances," said Katie-George.

And while she is hoping to get a short break after this week, training for 2020 will begin in October with a trip to Tokyo included.

Then the World Track championships take place in January in Canada with the World Road Races in Belgium in June before the Olympics.

The one issue which Katie-George and Eve have to address before next season is to acquire a new bike. As in all sports, equipment is being updated and the other countries would have much superior funding in this regard.

"We are looking to get a new road bike. Like everything, the equipment moves on. We will have to raise funds to get that," said Katie-George. Indeed, they have to do this on their own as "Cycling Ireland just don't have the funds."

But to compete in the Tokyo Olympics on a level playing field, the girls are hoping to have new equipment and also the important spare parts, which are an integral part of competing.

But for now Katie-George can bask in a third world success.

"We are looking forward to next year and looking at improvements."

That is the sort of commitment which will see the pair favourites to take a second Olympic title when Tokyo comes around.