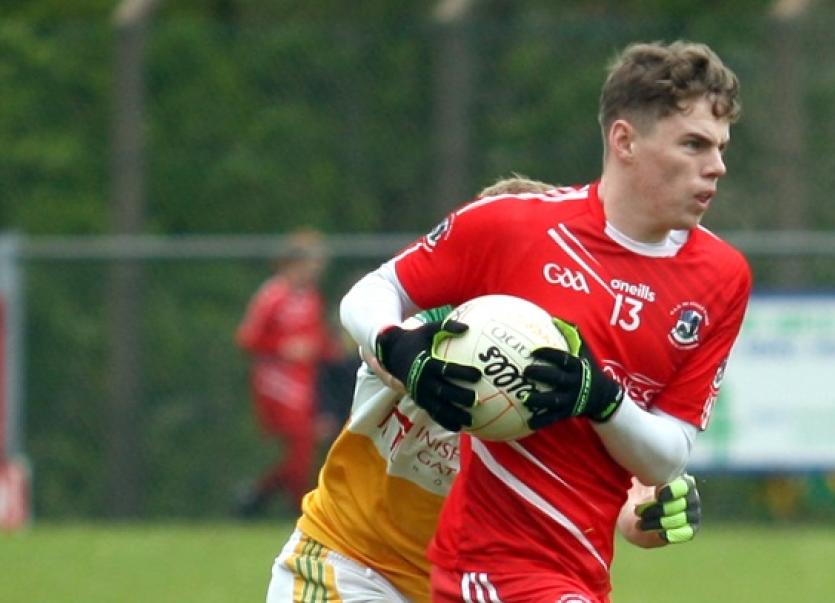 A five-star display from Hugh McFadden once again pushed Killybegs to a well deserved win over Dungloe in a fine display before their home fans and a few watchers from Kilcar, at Fintra on Saturday evening.

Killybegs 0-16
Dungloe 0-9
But the youthful Fishermen had quite a battle of it in a most entertaining opening half hour against a Dungloe side, who must now go into a relegation play-off.
No such blues for John Cunninhgam and Rory Gallagher’s young charges who have nine players under the age of 22 in their starting ranks.
And in Jack McSharry they have a player with Eoghan Ban Gallagher type pace and a player who is surely worth a long look from Declan Bonner.
But impressive Killybegs steamed into the quarter-final of the Donegal championship after a storming second half that simply blew Dungloe away in Fintra.
This was a fine display from youthful Killybegs who restricted their opponents to a mere two points in the second half.
They hit nine points in the second half with Hugh McFadden, Christopher Murrin, Ryan Cunningham and Shaun Gorrell among the scorers.
It was a disappointing final half for Dungloe who had recovered from a sluggish start to go in on a score of 0-7 each at the break.
Once again, the usual suspects walked tall for Killybegs with towering midfielder Hugh McFadden hitting 0-7 and Daniel Breslin, an imperious sweeper, using all his legendary soccer skills under the watchful eyes of John Cunningham and Rory Gallagher.
For an outgunned Dungloe, Adam Neely hit four well struck points while Oisin Bonner, Hugh Moy and the Currans had their moments.
But, they were unable to match their opponents superior fitness and panache in the second half.
The sides turned over at 0-7 apiece after a thrilling first half studded with some fine scores from both sides.
This was a cracking opening 30 minutes and for the first 20 minutes it looked like a lively youthful Killybegs and their vocal 16th man conductor Rory Gallagher were going to steam away from the Gaeltacht men.
But, a few inspirational scores from the excellent Adam Neely and Oisin Bonner, hauled Dungloe back into contention
The home side settled swiftly and should have had the ball in the net after Jack McSharry speared through a Dungloe defence that was as wide open as Bundoran on a 12th Weekend.
But his scorching shot skimmed the bar for the opening scores.
This was quickly followed by points from Ryan Cunningham and Hugh McFadden to put the impressive home side into a 0-3 to 0-0 lead by the 3rd minute.
Dungloe 'keeper Danny Rodgers opened his sides account when he converted a 45 metre free which was quickly countered by another point from McFadden.
Adam Neely got the first of his three fine points in the 11th minute, but it was still Killybegs who were in the ascendancy and they led by 0-6 to 0-2 thanks to further efforts from McFadden.
But Dungloe were gradually growing into the game with Neely and the Currans making an impact.
They kept Killybegs scoreless for almost 15 minutes and actually went ahead through a Neely free before Ryan Cunningham levelled matters for the home side as referee Marc Brown called time.
We were expecting a ding dong second half but it never happened as Killybegs quickly stamped their authority on matters.
Statham and Murrin were quickly on target and Evan Broderick made it 0-10 to 0-7 by 38th minute.
But the expected Dungloe revival never happened as Killybegs consolidated their lead and won comfortably in the end.