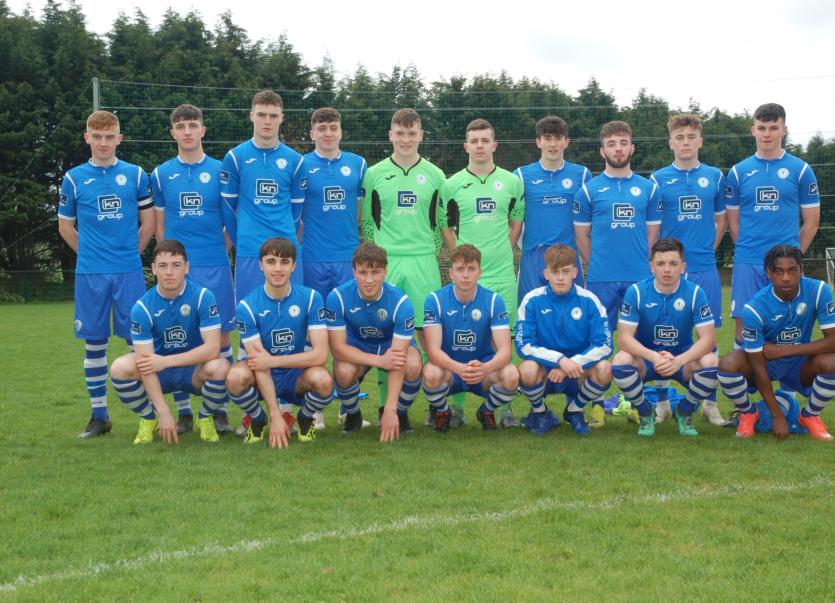 The Finn Harps under-19 side

Four Finn Harps underage sides are in action this weekend, with the under-17s and under-19s hoping to earn themselves a home quarter-final game. The under-15s meet Derry City in the League Cup while the under-13s face Waterford in the national shield semi-final.

The Finn Harps U19s play the final game of their regular season at Finn Park knowing that avoiding defeat against third placed Dundalk will be enough to ensure a second placed finish and therefore a home quarter final.  Harps come into the game in good form having beaten their Derry City counterparts last week, while Dundalk will also be confident following an 8-0 win last time out.  Earlier in the year Dundalk won the reverse fixture 3-1 at Oriel Park.  Kick off at Finn Park is at 2pm.

"It's credit to the lads that we have ended the season very well winning 6 out of our last 7 matches and secured a play-off position," noted managed Joe Boyle.

"We now have a huge match on Saturday against a Dundalk team who are in great form and we know this match is a head to head for second spot and home advantage in quarter final. They beat us in Oriel park earlier this year so we know they have quality in their side but it should be a great battle for anyone who comes along to watch. It's a credit to everyone that we have qualified for play-off positions for a few years in a row but the players know that now is the business end of the season and we must produce our best possible performances."

Harps U15s make the short trip to Redcastle (2pm KO) to play northwest neighbours Derry City in the first match of the League Cup. The draw for the competition took place last week and it placed both northwest rivals in the same group as league favourites, Shamrock Rovers.

Saturday’s match will see Paul McBride’s youngsters face Derry City for the fifth time in competitive action this season. Their most recent clash was played under the lights in Curragh, and it ended in a 2-2 draw.

Reflecting on the season so far, McBride was positive on where his side has come from.

“It’s been a year of learning really. We had a great phase one campaign," he said. Matches were tight, but we came out on top in most of them. There has been an obvious step up in phase 2. We’ve competed in all of the matches except two and both of those teams, Dundalk and St. Pat’s, were ahead of the others in my opinion. The standard has been high and as a group, it’s where we want to be to improve. We've played Derry so many times this year already. There's very little between us on any given day. There's been plenty of goals so far and I don't see that changing at the weekend, both teams tend to go for it.”

The latest team news from the 15s camp is that all players are available for the derby. Oisín Lynch has recovered from a shin injury and both Luke McGlynn and Jamie O’Donnell have returned from a school trip and are expected to see some action at the weekend.

All roads lead to Diamond Park, Ballyare this Saturday as the Finn Harps host Waterford FC in the U13 National League Shield Semi Final, kick off 2pm.

Finn Harps U13 head coach Kevin McHugh praised the influence of National League in its inaugural season. “It’s been a very positive season to date, the players have come on so much since this time last year," he said. "People questioned the U13 league National League, but this is our 21st competitive game in LOI and I can see huge benefits of this coming through in each player."

Harps welcome a Waterford side who came 2nd in the South section of the national league, whilst Harps themselves topped the Northern section. McHugh hinted at the exciting game expected on Saturday, "It’s a great end to the season regardless how Saturday's game goes. Waterford have been blowing teams away in their group, so it’s going to be a brilliant test for our boys against a quality side. Hopefully we will see a decent crowd in Ballyare for the game."

Heading into the final fixture in the regular season on Sunday the Harps U17s are in second place, just a point behind leaders Bohemian FC.  A win over Dundalk, who sit in mid table, would guarantee a home quarter final.  Bohs face Longford while both St Patrick’s Athletic and Shelbourne are just a point behind Harps and meet each other this weekend.   The sides played out a 1-1 draw when they met at Finn Park back in May and Harps enter the weekend in good form having won their previous three fixtures.

It was always going be a challenge for this group of players following a double-winning season but the squad has shown great commitment and it's no small achievement to reach the play-offs.  Our focus is now on approaching Sunday's match as best we can because we would obviously love to secure second place and home advantage for quarter final.”
END