FULL ROUND UP OF HARPS UNDERAGE TEAMS 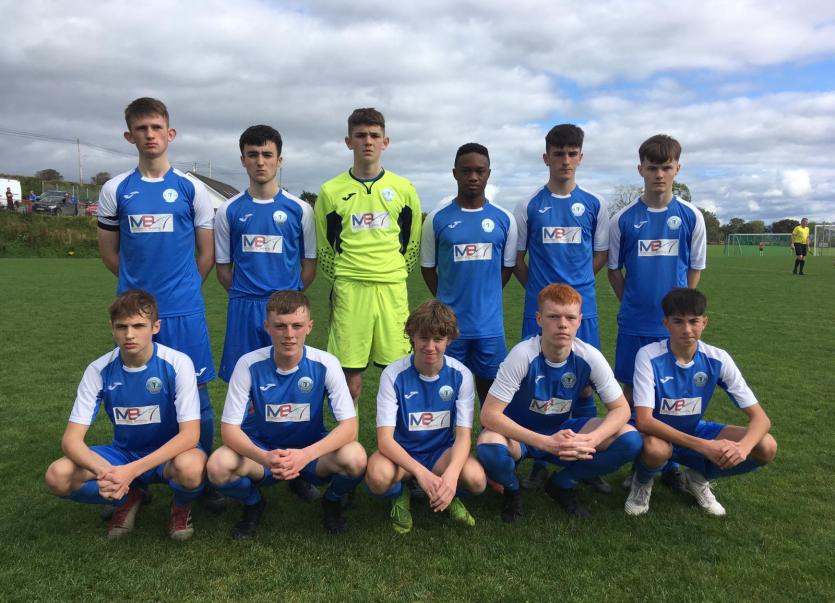 Harps U-13s into National Shield Final
Finn Harps booked their place in the National League Shield final with an impressive two goal win over Waterford on Saturday afternoon. Two quality first half finishes from Aaron McLaughlin coupled with a resolute defensive display set the tone for a comprehensive Harps victory.Waterford, who made the long trip north for the game, struggled to settle to the pace of the game early on, as a high tempo Harps pressed for an opening chance. They had to wait until the sixteenth minute when a marauding Liam Carlin whipped a dangerous cross into the Waterford penalty area which was only just missed by Shaun Patton, however the ball made its way to McLaughlin who controlled before finishing confidently past Jason Healy.It was McLaughlin who was causing the Waterford side the most problems with his runs off the shoulder of the defender. Conor Kelly found him shortly after with a delicately weighted through ball though he could only force Healy into a save from a wide angle. Good link up play between Carlin and Adam McDaid down the left saw the latter deliver a deep cross which McLaughlin headed goal-ward only to be denied by Healy.Harps deservedly doubled their lead minutes before the half time break. Captain James McAteer won the ball inside his own half before playing inside to McDaid. McDaid skipped past two Waterford midfielders and played a precise pass through to McLaughlin who had the composure to round the oncoming Healy and finish powerfully into the empty net.

Waterford showed their first sign of testing Harps on the stroke of half time when substitute Eoin Hogan was played through, though his low shot was superbly held by Harps net-minder Killian Hagan.The second half started at a much lower intensity with neither side really broke the other down with the game mostly being played in midfield.

Waterford had the ball in the net midway through the half when Callum Costello turned in Romeo Akachukwu’s miss-hit shot however the goal was ruled out with Costello adjudged offside.

Waterford we’re finding it increasingly difficult to break the stout Harps defense down, though both Costello and Conor Tobin were looking dangerous for the away side.It was Costello who had the best chance of reducing the deficit for the visitors with less than 10 minutes remaining when he raced onto a long ball over the top leaving him one on one with Hagan, the Harps keeper pushed him wide narrowing the angle before making a fantastic save to deny the forward and retain the clean sheet.Harps now turn their attention to cup action next weekend, before the national league final the weekend after against Shelbourne.

A 25 yard strike from Emmet McCarron was enough to give Derry City all three points in Saturday’s U-15 League Cup clash in Redcastle.Two evenly matched sides went head to head and there was very little to separate them in the first half. Harps started much the brighter, but it was Derry attackers that tested Doherty in the Harps’ goal. Derry took the lead when a ball played across the front of the goal was tapped to the net by Luca Doherty.Harps responded positively and went close to equalising through Conor Campbell and Jamie Harris. The equalising goal came from the in-form, Mark M’buli. M’buli received the ball with his back to goals, turned on his right and shot from 20 yards out.The match looked destined for draw when McCarron scored from 25 yards in the 70th min. Harps threw everything at Derry for the last few minutes but Derry’s rearguard held out to win 2-1.

Harps next game will see them play Shamrock Rovers at home. A date and time to be confirmed during the week.

A hat trick from Jamie Browne ensured Joe Boyle's men of 2nd spot in the Northern Division which means they will play Shamrock Rovers on Saturday in Finn Park.

Harps started the better of the two sides and forced the Dundalk keeper into two good saves from Browne and Corey McBride after good build-up play.

The first goal came in the 8th minute when Jamie Browne closed down the Dundalk defender before robbing him of possession and after a good advantage from the referee, Browne coolly slotted past Hogan in the Dundalk net to give Harps the lead.

Harps created a few more chances towards the end of the half & would have been disappointed to only go in at half time one goal ahead.

The home side started the 2nd half the way they ended the first and went further ahead in the 47th minute when Browne finished well after more good play involving Stephen Doherty and Niall McGinley.

Dundalk created very little and the home side was hungry for more as Hogan made a few more good saves from Doherty and Ronan Gallagher.

The 3rd goal eventually came in the 66th minute when, from a Stephen Doherty corner, Browne headed past the helpless Hogan to make it three.

The home side saw out the game comfortably and they now look forward to Saturday's quarter-final against Shamrock Rovers in Finn Park on Saturday.

A good second-half performance from Declan Boyle's men saw them overturn Dundalk in Oriel Park to guarantee 2nd spot in the Northern Division which means they will have home advantage against UCD on Sunday in the quarter-final of the league.

The home side looked lively from the start and created a couple of half chances but failed to trouble Patrick McGarvey in the Harps goal. Harps came into the game more as the half went on and Luke Rudden was unlucky not to give them the lead when he found himself in a bit of space down the right-hand side before firing a low effort just past the Dundalk post. Further efforts from Conor Black and Daniel Gildea came to nothing as Harps finished the half stronger, but the sides went in level at the break.

Harps came out strong at the start of the second half and went ahead in the 49th minute after a great move ended involving Nathan Logue and Conor Black saw Daniel Gildea fire home at the back post to give Harps the lead. Harps got stronger and stronger as the half went on and had efforts from Rudden, Logue and Black all saved by Kuba. Adam McCarron then tried his luck from distance while Carlos O'Reilly also had an effort at goal but both efforts went wide of the right-hand post.

The second goal came in the 70th minute when a corner from Daniel Gildea was headed into his own net by Valentino Adedokun to extend the visitors lead. Harps saw out the remaining 20 minutes and had further chances to extend the lead from Rudden and Jamie Doherty but they now look forward to next Sunday's test against UCD.