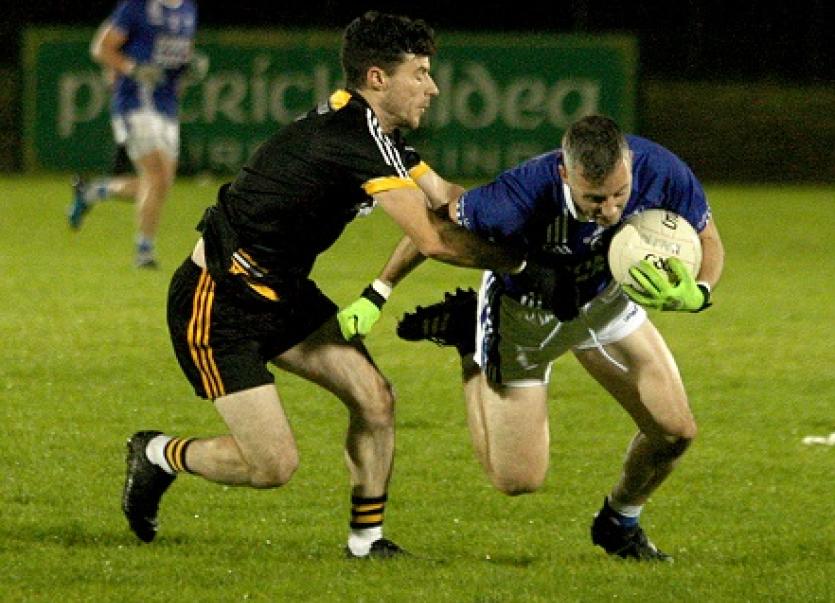 Barry Dunnion on the ball for Four Masters against Malin in Convoy Picture: Thomas Gallagher

Four Masters, thanks to a brilliant start, are safe in the Donegal Senior Championship for another year after defeating Malin in the relegation play-off in Convoy on Saturday evening.

The Donegal Town men were 1-4 to no score ahead inside the opening minutes with the goal coming from Patrick Reid in the first minute.
Kevin McBrearty, Jamie Crawford, Killian Faulkner and Conor McDaid added points and from there Four Masters were never really in any trouble.
By half-time Four Masters had added five more points, three from the impressive Kevin McBreartyy, Conor McDaid and a Killian Faulkner free.
Four Masters led 1-9 to 1-6 at the break after Malin had staged something of a mini comeback with a goal from Stephen McLaughlin and points from Christy McLaughlin and Paul McLaughlin.
A second goal from Jamie Crawford 13 minutes into the second half really settled the issue.
Malin will now play Ardara in the last of the relegation play-offs with the loser dropping to the Intermediate Championship next year.