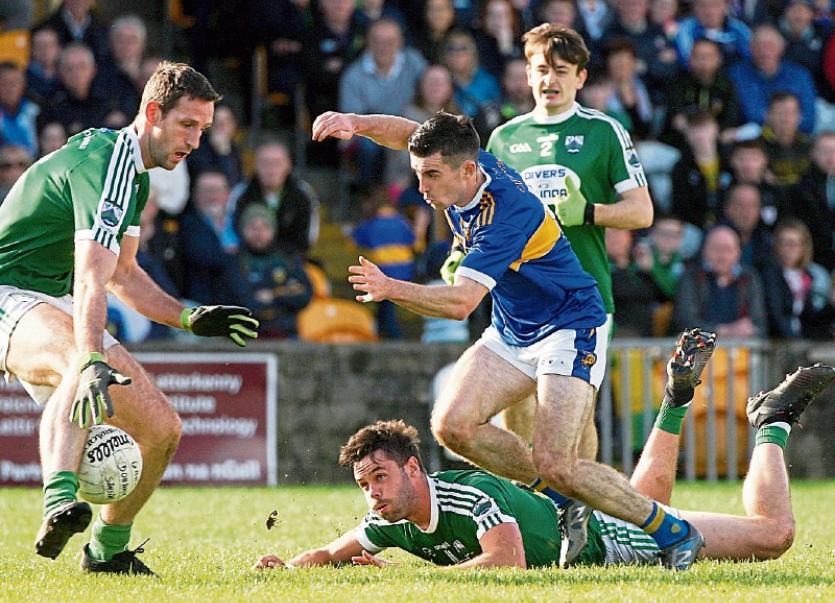 When county boards or club executives sit down with those individuals or companies that are keen to get into a partnership, how does the conversation go? On one side you have the company or the benefactor who want to give towards the cause and on the other side you have the club or county board who need every assistance they can get their hands on.

The reason I ask about clubs is simply they are just as big a part of this as any county board. If they don’t get on board the multiple company sponsorship route they too will struggle to survive and as all are members of the same Association, both clubs and county boards have to be accountable for the deals they make and the terms and conditions of those deals to be in keeping with the ethos of the GAA.

It should not be beyond the authorities that govern the rules and regulations of the Association to set out hard and fast rules for county boards and clubs to adhere to and that all contracts held by clubs and county boards be subject to scrutiny from Croke Park as that in the future nothing untoward could damage the good name of a county board or club.

I am sure many will not agree and deals can be done over a cup of coffee or even a pint in the local. However, the good name of the people associated with doing such deals can be affected or tarnished and it also can have a huge effect on a club or county board on raising funds in the future.

The cases that have come to light in the last few weeks centred around the Mayo and the Galway county boards have painted a murky and negative picture. We have the very public stories of what may or may not be going on in the FAI; this can have a huge knock-on effect for clubs from all sports.

In the case of Galway where their main sponsor, Supermac's Pat McDonagh, has asked the question how has the €1.6 million that he has given to the county board in the past four years, been spent. His question has raised a huge amount of discomfort, to say the least. Was it part of the contract that both parties entered into that the sponsor had a say in where the money be spent? If so, why was this not done annually? Should a sponsor or a contributor have a say in where the money be spent and where does Croke Park stand on this issue?

Because the power certainly is in the hands of the sponsor. Does this request overstep the line? Did Supermac's not get value for money from their association with the Galway teams? And of course there was recent success or is there underlying issues that are not being properly explained or kept from the public or members of the Association? If so here lies some of the issues when contracts or sponsorship deals have no hard guidelines.

The Mayo situation is somewhat different. In that the contributor is part of an overseas group set up to raise funds for the running of county teams. First things first, all or most county teams have groups like this set up. If they were relying on monies generated from within their own county, survival, especially if you are to compete at the highest level, would prove extremely difficult. There has always been a culture within the GAA and many other sports for those who have had to emigrate to send something back; it’s a vital part of their identity and it keeps their ties and connections at home.

Just like the Galway case, the Mayo county board are being asked specific questions on how the money that has been given to them by a group headed by Tim O'Leary has been spent. In fact, he has asked whether or not the players, management or the county board has benefited from their contributions.

Again, just like the Pat McDonagh situation, has Mr O'Leary the right to ask such questions? Are the Mayo county board in a position to refuse to answer such questions and again should they answer these specific questions? Maybe if guidelines had been drawn up at the start, this situation would never had occurred. While there may be little or nothing to see here, it presents a poor picture and reflects a bad image.

Our relationship with money and corporate governance within our sporting culture has not being great in the past. Indeed, far too many investigations and inquiries have surrounded life in Ireland that the hint of a scandal has pushed companies and benefactors away from making contributions. Many businesses get a lot of positive exposure from their association with sport and just like soccer and rugby, the GAA needs the financial boost it receives from such contributions.

If this is to continue and have a positive effect for both sides, guidelines have to be set out and adhered to; no under the counter, nod and a wink deals, and it has to be open to scrutiny from members and those that run our games. Sooner rather than later.