THE SPORTING DIARY: Intermediate replay - it was always going to happen 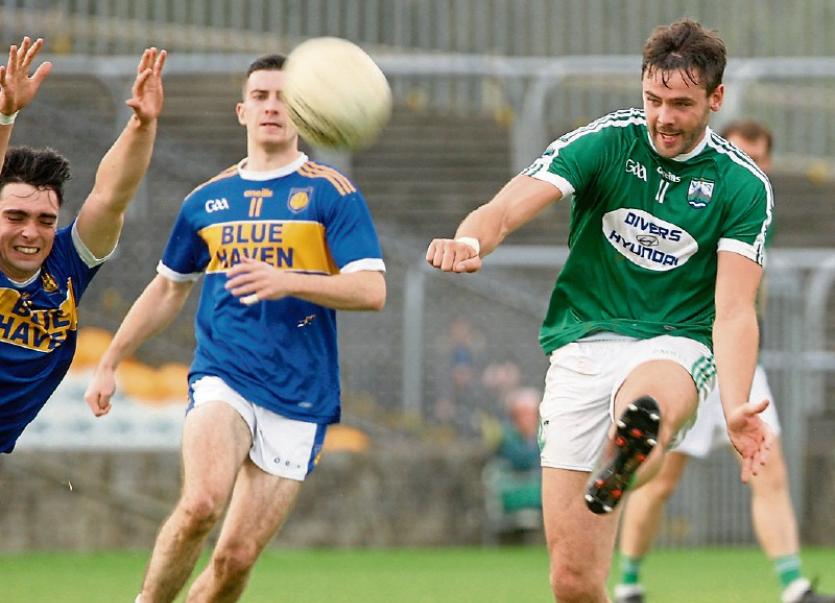 The winners (if there is a winner) will play a seventh game on Sunday next with St Nauls waiting for the final, fixed for MacCumhaill Park, Ballybofey for 4pm.

The Cloughaneely/Aodh Ruadh semi-final was drawn after extra-time on Saturday last after a cracker of a contest in very difficult conditions. Both sides were in agreement afterwards that common sense would have to prevail regarding the replay which was set for last night.

Both clubs sent requests to the Donegal Competitions Control (CCC) committee requesting that the replay be put back to Saturday and that the final could be played a week later. (There was plenty of wriggle room regarding the winners playing in Ulster with the Donegal representatives not out until the first weekend in November).

The Donegal CCC met on Sunday after the senior semi-finals and stuck to their original plan of playing the replay on Wednesday night. Aodh Ruadh had requested that the decision be made on Sunday because they had to make plans for a player who was due to fly to France as part of his college course.

Then on Monday night Cloughaneely put in a further request at the monthly Co. Committee meeting for a postponement until Saturday, but by that stage Aodh Ruadh had made plans based on the CCC Wednesday night fixture.

This would have been avoided if the CCC had accepted the requests on Sunday and put the game back until the Saturday.

But then this situation was like an accident waiting to happen. Fixing a county championship running six weeks in succession was always asking for trouble.

It ticks all the boxes of what should not be done - not least player welfare, but also it demeans the entire competition.

This week we in the written press would normally be carrying a few pages of previews with interviews, etc. But with only one team qualified, that cannot happen. It is very unfair on St Nauls also, who are caught in the crossfire.

And the irony is, if someone with a link to the team suffered a bereavement in the Ballyshannon or Cloughaneely area on Tuesday or Wednesday of this week, then the CCC would immediately grant a postponement. Why they didn't do so when they met on Sunday only they can explain. They can grant postponements on special occasions for other games; surely this came inside the remit of a special occasion.

Cloughaneely had already been forced to bring home their players based outside the county because of a postponement the previous Monday night. They didn't have a choice. I think they deserved better this time around.

Whoever came through last night's replay will be diminished prior to a county final. It might even take extra-time again.

Hopefully, lessons can be learned from this, but I'm not so sure. It happened with the senior championship in 2012 and when Cloughaneely last won the Donegal Intermediate Championship in 2014, they played the final on a Saturday and an Ulster club quarter-final the following day.

After two high quality semi-finals in this year’s Intermediate Championship, it is a pity that all the talk is about an off-field issue.

Brian McEniff in his column this week in Tuesday's Donegal Democrat/DPP spoke of the state of Donegal club football after witnessing Sunday's semi-finals in MacCumhaill Park.

The cream certainly came to the top with the four teams that were present. The stand-out display, however, was that of Gaoth Dobhair, who performed like Ulster champions. In some regard, they were helped by all the talk about Kilcar being hot favourites. It was perfect preparation for Mervyn O'Donnell and his backroom team. But it is easy to talk the talk, Gaoth Dobhair walked the walk on the field on a perfect day for football in October.

Kilcar just didn't have the answers and it would have been difficult to pick out any Kilcar player that got the better of his opponent. The five point winning margin didn't flatter Gaoth Dobhair.

It was the type of performance that a manager would dream of; the collective was perfect but the individual displays were also of the top order. Neil McGee was in control when Patrick McBrearty was in around the 'square'; Eamon McGee was calmness personified when Gaoth Dobhair played 'keep ball'; Dáire Ó Baoill looked to have the freedom of the park and Odhrán Mac Niallais was just a joy to watch. When he was needed Kevin Cassidy did what he does best.

The younger brigade also showed up, none more so than Odhrán McFadden Ferry, who would have given Ó Baoill and Mac Niallais a run for man of the match.

The other semi-final was a much closer affair but again experience was the key. Leo McLoone pointed from the throw-in but more importantly, with the scores level, he manufactured the free which was to win the match for the Glenties/Fintown men.

Ciaran Thompson was immense around the middle; Eoghan McGettigan is maturing into a good forward, but it is their all-round 'know-how' which keeps them in the top order in Donegal. Dermot Molloy was only introduced at half-time. They will be a better match physically for Gaoth Dobhair than Kilcar were.

Spare a thought for a young St Eunans team, who are always there or thereabouts. There will be questions asked why Conall Dunne was not used in such a tight game. Indeed, the same question might be asked in Kilcar, who didn't use any subs at all. Look at the contrast of Gaoth Dobhair and Naomh Conaill - the Magheragallon men made four substitutions while Naomh Conaill made five.

But overall, there could be few complaints. The two best teams on the day came through and we can look forward to a very close county final. What more can we ask for?

FOOTNOTE: Last week in this column I raised a question from a Four Masters official regarding the fixing (or non-fixing of championship games) for Tirconnaill Park. I said that there may be a good reason for this. It seems there was as I was informed early this week that the Donegal Town venue was not available to the CCC requests for the weekends concerned. Happy to make the clarification.