Buncrana and Letterkenny Gaels meet in Junior A final 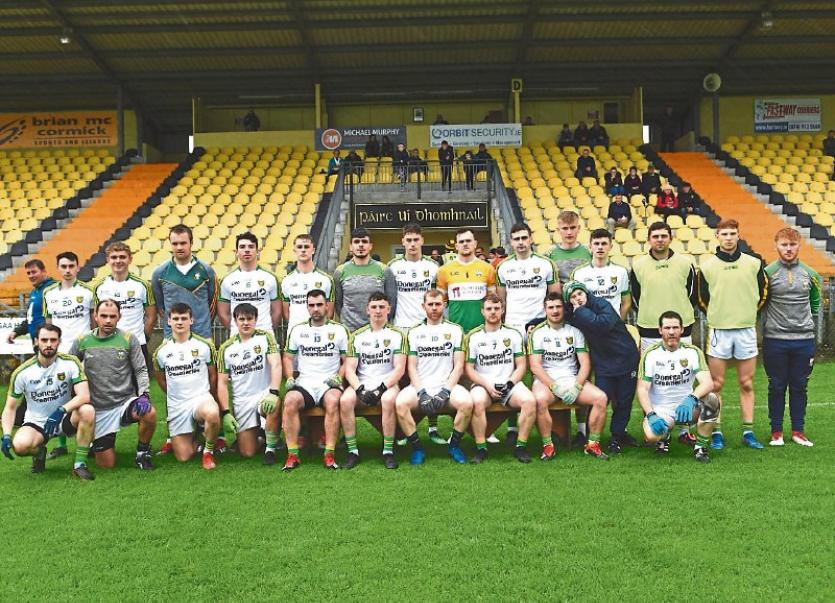 The cream always comes to the top as is the case with Letterkenny Gaels and Buncrana who meet in the Donegal Junior A Championship final on Saturday in O’Donnell Park. (4 pm)

Saturday is a big day for the two teams but especially Letterkenny Gaels, who are playing in an historic first Junior final in the clubs 23-year history. Letterkenny Gaels was founded in 1996.

The club have a double date in O’Donnell Park on Sunday, with the reserve team facing Urris in the Donegal Junior B final.

Buncrana, relegated from the Intermediate championship at the end of last season, have bounced back this season in the Junior championship.

And on the back of their impressive run to the final, which included big wins in the group stages over Carndonagh, Na Rossa and Naomh Padraig, Lifford and Urris in the quarter-final, they go into Saturday’s final as favourites.

The Inishowen men had four points to spare over St Mary’s, Convoy, in last Saturday’s 1-10 to 1-9 semi-final win in O’Donnell Park.

“We know the task ahead of us. Buncrana have a fantastic panel of players,” said Letterkenny Gaels manager. Sean McBrearty, a former Donegal Division One League winner with his native Kilcar.

“While they were relegated from Division Two, they still have a good team. I watched them a few times this year.

“They have a lot of reinforcements back when you take it Caolan McGonagle is back from the county scene, Darach O’Connor back from America, Ryan Bradley back in the squad as well.

“They have a massive panel and they are everybody’s favourites to go a long way this year. We are going to have a difficult task but we will prepare this week.”

Malachy McCann is the Buncrana manager and after a disappointing league campaign he is delighted with the team’s championship campaign.

And he is hoping to bring the curtain down with a second junior championship success for the club.

Buncrana won their one and only Junior championship in 1988. They defeated a St Eunans B team that included a young Mark Crossan.

“We were missing a lot of players during the league. Caolan McGonagle was away with Donegal and Darach O’Connor was in a America for the summer; Jack O’Loughlin was tied up with Donegal hurlers,” said the vastly experienced McCann.

“But they have all returned for the championship and we now have the strongest squad we’ve had for years. They are very committed and we have big crowds at training every night.

“We feel we have the team and the squad to play in the Intermediate championship and higher. But I’m sure Letterkenny Gaels feel the same.”

Letterkenny Gaels have made it through to the final following a win over Naomh Padraig, Muff and a draw with Moville, at the group stages.

In the quarter-final they proved much too strong for Carndonagh while they were also comfortable winners over Na Rossa in the semi-final.

“Getting past the semi-final was a big thing for us. We lost the two semi-finals to Red Hughs and Naomh Colmcille, two teams that went on to win the championship.

“Having got over the hoodoo of losing at the semi-final stage hopefully we can go out in the final and every player express themselves as best they can and hopefully we will come out on the right end of the result.”

Letterkenny Gaels hope to have former county minor and U-21 Cormac Cannon back from injury for Saturday’s showdown.

“Cormac picked up a slight injury in the quarter-final. We could have played him against Na Rossa but we decided the extra week would be of benefit to him.”

Buncrana are sweating on the fitness of their former county ace Darach O’Connor. O’ Connor, who has slotted back into the team with great effect since returning from the US, is struggling with a knee injury which forced him out of the semi-final against Convoy at half-time.

“Darach injured the knee in the first half against Convoy. We are awaiting the results of a scan before we will know the extent of the injury.

“Hopefully he will be fit to play because Darach is a big player for us,” said McCann.

Otherwise the Buncrana boss has reported a clean bill of health for the rest of his squad.