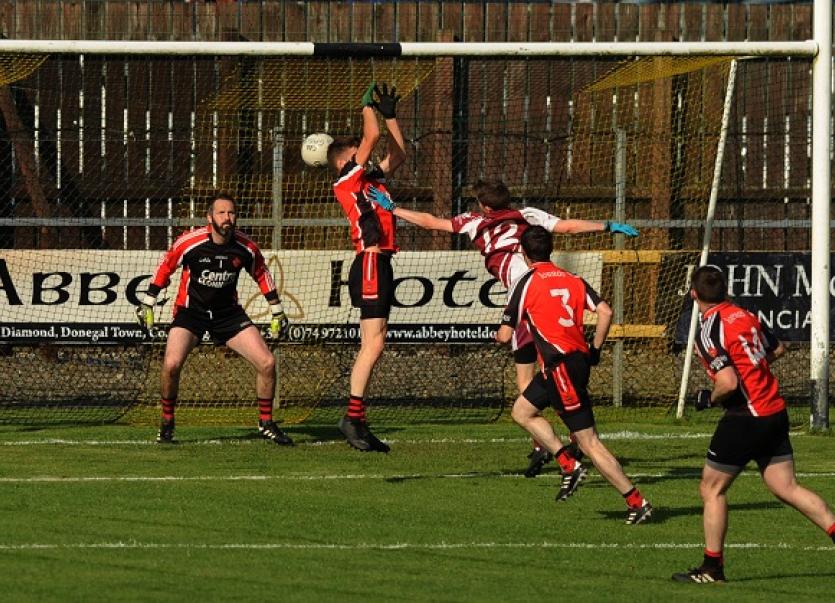 Super sub Paul McConalogue snatched a dramatic victory for Urris with a 61st minute goal in a superb Junior B Final in O’Donnell Park.

He was only on the field for about 12 seconds when he scrambled a dropping lobbed ball to the gallant Gaels net.

His deadly finish put Urris into a 3-11 to 4-7 lead and the Gaels were just not able to narrow the gap in extra-time.

But nobody would have complained if the match had ended in a draw.

It looked like the Gaels had edged matters when the outstanding Mark Hunter hit a superb shot to the roof of the net in the 55th minute.

But Urris hit back with a point from Brian Doherty which should have been a goal before McConalogue’s late winner.

Letterkenny Gaels started brightest and centre forward Charlie Creevy got them off the mark with a well struck point after two minutes.

But Urris, who had three of the Donegal Masters in their squad, Adrian Doherty, Peter Devlin and sub Sean McDaid, replied in kind from an Alan Harrington free after nippy corner forward Niall McLaughlin was fouled in the 4th minute.

And Shane Doherty put the Inishowen men in the lead with a point after 8 minutes.

But then, a moment of magic from Donegal Masters squad member Peter Devlin put Urris into 1-1 to 0-1 lead.

Devlin beat Gaels keeper Paddy Gildea to the punch after a high hanging ball from Brian Doherty was launched deep into the Gaels square in the 9th minute to put Urris into a 1-2 to 0-1 lead.

It was then late sub Mark Hunter hit the first of vital points for the Letterkenny lads to leave a goal between the sides in the 10th minute.

Lady Luck was surely wearing the maroon of Letterkenny Gaels for a crucial score in the 16th minute.

43-year-old Alan Harrington tied matters from a free and Urris went back in the lead through a fine effort with the outside of the boot to leave them ahead by 1-4 to 1-3.

The inevitable Hunter hit back for the Gaels with a point and a goal in the space of 30 seconds.

The goal was a pretty scrambled affair as Gaels full forward Peter Doherty lost possession Shane Doherty pulled back a point for Urris as the Gaels led by 2-4 to 1-5 at the break.

Conor Cullen hit a great solo goal for the Gaels in the 43rd minute but the ageless Devlin countered in kind in the 44th minute to set up a memorable final quarter.