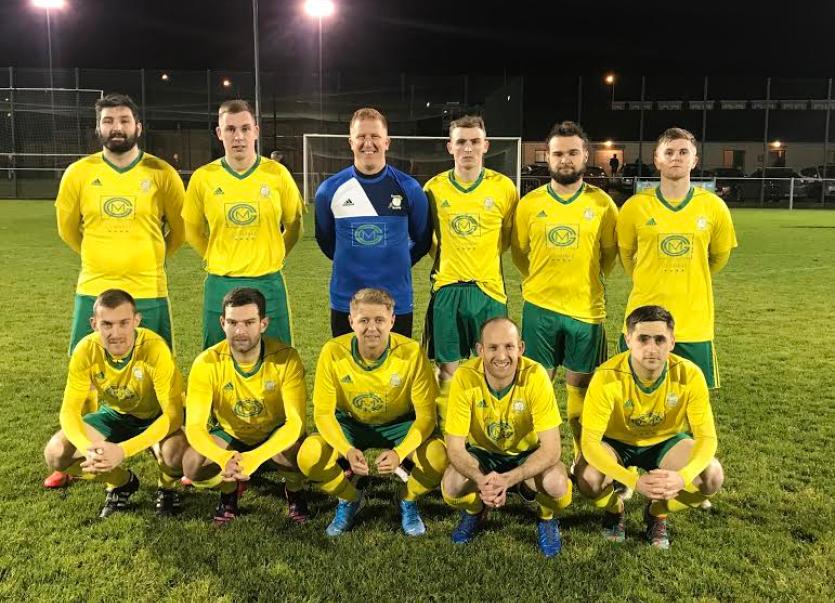 Bonagee maintained their perfect start to the bmcsports.ie Ulster Senior League with a win over Derry City Reserves at Dry Arch Park.

McFadden, in his first game back with Jason Gibson’s team, netted late in the first half as Bonagee made it three wins from three in the League on Monday night.

The clock was heading close to half-time when McFadden got ahead of Oisin Gibson, the Derry goalkeeper, to finish from close range.

Bonagee were equally indebted to goalkeeper Eugene Ferry, who pulled off a super save to deny Brendan Barr as the midfielder bore in on goal midway through the second half.

Bonagee were down the likes of Jordan Armstrong, Micheál Doherty and Jamie Lynagh, but they began well and Garbhan Grant just couldn’t get enough purchase on an early header.

Michael Funston tried his luck from distance, but it was blocked by a defender.

Derry enjoyed the bulk of the possession, but they were restricted to a testing Mark McFadden effort in the opening exchange, which Ferry dealt with.

Jack Parke had a decent opening after the half-hour mark, but his shot flew off target.

Bonagee had the better of the chances and Deano Larkin - who netted a late winner last weekend against Finn Harps Reserves - could have opened the scoring. From just inside the area, however, Larkin had too much elevation on his shot.

Bonagee led just before the break as McFadden - who has come back to Dry Arch Park after a spell with Maiden City - broke the stalemate.

Funston went close to doubling the lead with a superb effort off the outside of his right boot. The swerving attempt was beaten away by Gibson, who also parried from Ryan Rainey.

Ferry turned away an awkward drive from Matty Walker, before the ‘keeper raced from his line to save from Barr at the vital second, just when an equaliser seemed inevitable.

Bonagee might have put the issue to rest late in the game, but Larkin was denied by Gibson before sub Chris Breen fired wide.