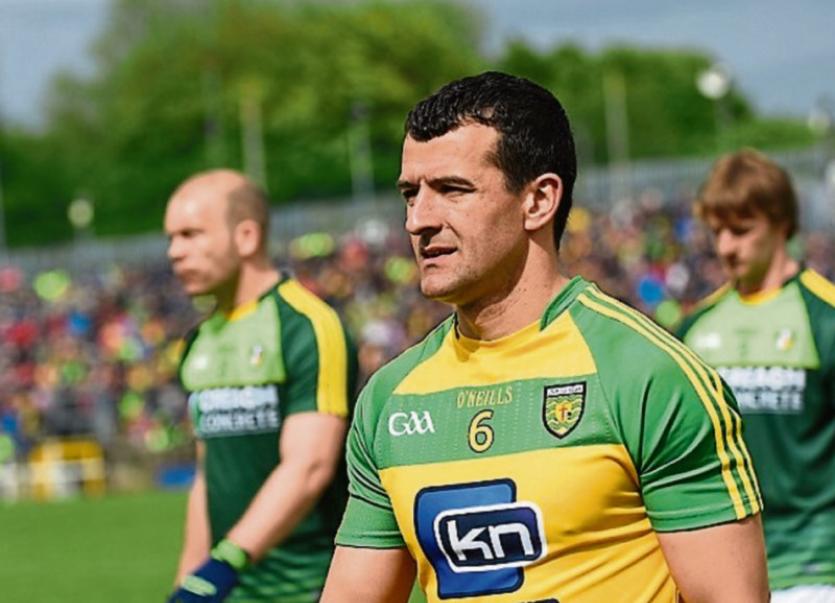 When you think of a top 10 of Donegal intercounty footballers of our lifetime, then Frank McGlynn would be a certainty to be included.

That is the stature in which the Glenfin man will be held after he announced his retirement this week. A gentleman footballer, if ever there was one, his retirement was handled with the same professional and cultured manner in which he carried himself in life.

He picked up his fifth Ulster Championship medal in 2019 with those medals coming in a medal-laden nine years since 2011. It was strange the way Donegal's fortunes turned around. McGlynn had joined the Donegal ranks in 2006, but there were slim pickings before the arrival of Jim McGuinness and a change in the mindset of players.

Not that Frank McGlynn was of a mindset that needed to be changed. He was the model player from the start and even last year when a starting place was not guaranteed, he remained loyal and played his part in providing an example for the new recruits coming through.

Injury has hampered him in recent years, but it didn't change his character. He went on to help his club to an Intermediate Championship and, no doubt, he will be a huge asset to his club going forward.

But from the outside, it is obvious that he was one of the most loved and talented footballers that ever pulled on a Donegal shirt. I first saw him play in an U-16 challenge game in Galway in 2002. The Donegal senior team were playing a National League game in Tuam and the U-16s played a challenge in the morning in a remote rural area between Dunmore and Tuam. I can't remember the name of the club grounds and I remember having difficulty finding it with the game having started by the time I arrived.

He went on to play at all levels and one of his great traits was his versatility. You could give any number jersey and he would give you something extra because with the ball in his hands he was always likely to produce something. He could defend and he could score, but like all great players, he made the correct decisions when on the ball.

Frank was never one to seek the limelight, yet during the course of a game he could make his mark and if any young player needs reminding of what a county player should be, then they should look up the career of the Glenfin man.

Enjoy your retirement Frank. You gave us lasting memories.

The welfare of players was an issue last week as Naomh Conaill won the Donegal senior championship and then had to play an Ulster club quarter-final four days later. If they had lost out to Castlerahan in Kingspan Breffni Park, Cavan on Sunday last, then that issue would have gained legs.

However, because Naomh Conaill won that game and have a two-week break until the semi-final, the matter has died a death. Which is a pity. The concerns raised by Dr Charlie McManus in writing to the Ulster Council about player welfare was timely. It was never going to make a difference with the Ulster Council, but it did start a conversation. There were precedents for the game to go ahead, as a few Donegal clubs would remind you (finals being played on Saturday and the Ulster club game the following day).

However, maybe it is not the Ulster Council who should be faced with the problem. Should the letter be re-directed to the Donegal GAA Co Board to make sure that they provide the fixture schedule whereby the Naomh Conaill situation does not arise in the future?

That is the conversation that must take place before 2020.

Away from the issue of player welfare, Naomh Conaill defied all their critics and although they did tire in the last 10 minutes in Cavan, they had a brilliant couple of weeks. The 'Democrat Jury' was the subject of some added lyrics by Leo McLoone snr at the homecoming in Glenties.

It would have been interesting to ask the 12 jurors ahead of the third game if any of them had changed their mind. These two teams were almost inseparable after some 224 minutes of football. Even the point from John O'Malley that won the game was disputed, being played over and over again on 'phones and laptops to see if it went inside or outside. There are some who are still of the opinion that it wasn't a point, but I think the pictures are pretty clear that it was. It was a point worthy of winning any game.

But in a related manner, there is an issue with umpires not being more decisive in these decisions, and there is a case to be made that these officials need to do courses before taking part in big games. There is also an issue at some grounds where it is very difficult to get behind the goals to have an accurate picture, with the net being too close to the surrounding fence/wall.

It is an area - just like the fixture scheduling - which can be improved. And nowadays with TV cameras at most games from the quarter-finals onwards, all officials - linesmen and umpires - are under much more scrutiny. We had three referees covering the three games in the senior final and they all did very well.

I was detailed to go to Corrigan Park, Belfast on Sunday - my first ever visit to the former county grounds of Antrim - and my reward was to see St Nauls advance to the last four of the Intermediate championship with a deserved win over the Antrim champions, St James of Aldergrove.

Prior to the game I met former Antrim great Andy McCallin - a corner-forward on the first All-Star team of 1971. He is still a great clubman, manning one of the field gates at every game at the venue, and he was in the Athletic Grounds the previous night to see Crossmaglen Rangers against Clontibret.

Corrigan Park is the club grounds of St Johns and their most famous player has won eight senior football titles and two senior hurling titles. But he bemoaned the fact that his famous side have not won a senior title since 1991. When I asked him about playing with Peter McGinnity of Fermanagh, his face lit up. "It was great to play with him, you knew that you were going to get the ball in the right place."

McCallin went through the St Nauls team with me on the programme and he kept a very keen eye on the game. Peadar Mogan was the difference between the sides in the first half as he hit 1-3 to give his side a four point half-time lead. A second goal just after half-time by Daniel Brennan more or less sealed the win. However, Brennan will have learned a harsh lesson about confronting a referee when he had a black turned to red minutes later. He was probably harshly treated as regards the proposed black card, because the defender was the first transgressor, but sometimes you have to take your medicine for the benefit of the team. As his manager said afterwards "that's sport".

The night before in Celtic Park, Derry, Buncrana scraped into the Ulster Junior final with a penalty shoot-out win over Rock St Patricks of Tyrone. It is not everybody's cup of tea, this penalty kick issue.

But if we go back to Dr Charlie McManus's letter re player welfare, then we have to find a way of deciding games on the day. Some people are proposing that we play more extra-time, but does that not put player welfare at stake also.

Anyway, big John Campbell hit the winning penalty for Buncrana and they have an Ulster final to look forward to. Wouldn't it be some turnaround for Donegal club football to win three Ulster Junior championship titles in-a-row.

It was something most neutrals felt possible once Buncrana were relegated from Intermediate last year. They are just too strong for junior, but they must make the most of the great opportunity that lies in front of them now.

It was one of those weekends that you could only savour. Finn Harps, with a workmanlike performance, remain in the Premier Division with their 2-0 extra-time win over Drogheda on Friday night.

On Saturday morning we had that smarmy grin knocked off the face of Eddie Jones as South Africa steamrolled England in the Rugby World Cup final. I actually felt sorry for some of the English players, but just couldn't but smile at Jones getting his comeuppance.

Some of us actually got up at 5.30 on Sunday morning to accompany Rory on his back nine victory in Shanghai, China. It was then off to Belfast. On the way home the penalty shoot-out in Brewster Park between Derrygonnelly Harps and Trillick provided great radio, and then we listened to the sickening injury suffered by Everton player Andre Gomes. Just looking at the faces of the two Spurs players Son and Aurier afterwards showed how horrific the injury was.

But then again, it was a freak break and Son should not have got a red card. But like Daniel Brennan in Corrigan Part, "that's sport".

Sometimes the stars align in the correct manner. That was the case on Friday night when Michael Murphy at last won a third All-Star. If he was measured by the same standards as everyone else in the country, then he would have more than four at this stage.

Hopefully, there is more to come. The Glenswilly man was fully fit throughout 2019 and after a much-needed rest he should be in fine fettle to lead Donegal again in 2020.