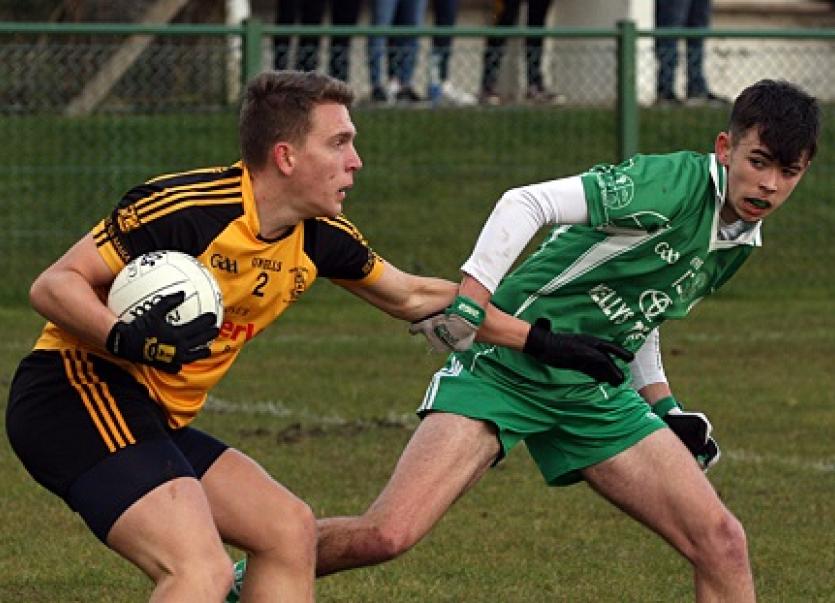 This was magnificent entertainment on a soggy November afternoon when Peadar Mogan had ice in the veins as he made it 4-2 for St Naul’s after a penalty shootout in trying conditions, after a total of 84 minutes of drama.
But man of the match Gavin Mulreany. who hit a superb 3-8 for Naul’s, best summed up the reaction of those present, when he said: “It is great for us to win and get to a county final and I know it is in the rules, but this was no way to finish a game.
“I would have preferred a replay, that is the least Bundoran deserved, and we could have played that replay after our Ulster Intermediate semi-final match on Sunday week.”
Otherwise, this was an enthralling contest between two teams who just simply refused to die.
Bundoran had the better of the opening 60 minutes but were rocked by two goals in either half from marvellous Mulreany, the first a penalty in the 16th minute to overhaul a 0-5 to 0-1 lead.
And the Seasiders, for whom full-forward Cian McEniff looked to be operating at only 60 per cent of his full capacity and who hit 0-9, eight from frees, had to scramble a late Timmy Govorov goal in the 62nd minute after Mulreany struck again to find the net in the 56th minute after a great pass from Mogan, to leave St Naul’s leading by 2-10 to 1-13.
But it got even more dramatic in extra-time when, like Trillick last week against Derrygonnelly Harps, Bundoran raced into a four-point lead when Conor McLoone rifled the ball to the roof of the Naul’s net and the trusty McEniff pointed a free.
It looked bleak for the home side as Bundoran led by 2-14 to 2-10.
But a point from sub Ryan McBrearty and a superbly finished goal and two points from Mulreaney left the home side actually leading by 3-12 to 2-14 at the break.
Adam McGlone levelled matters for Bundoran and it looked like Bundoran had finally nicked it when McEniff put them back in front with one minute to go.
But a defensive error led to a real pressure free for Naul’s and once again Mulreany proved adequate to the task to send the match to extra-time.
To say that neither side deserved to lose this match would be a severe understatement, but the quality of football served up was excellent especially in very torrid conditions.

EARLY LEAD
Bundoran settled swiftest and eased into an early five points lead through Cian McEniff, Noel Carr and the excellent Timmy Govorov by the 10th minute.
Govorov could have had a goal but Diarmuid Gallagher made a brilliant save on the line.
Mulreany steadied Naul’s nerves in the 11th minute and then he converted a penalty when John Relihan was fouled just inside the Bundoran defence.
That score turned the contest on its head with Mulreany (0-3) and Mogan on target for Naul’s with McEniff, Oisin Walsh and Paul Murphy pointing for the Seasiders as the sides tied at St Naul’s 1-5 Bundoran 0-8 after a half where the Seasiders were generally on top.
If anything, the tempo quickened in the second half with Mulreany and McEniff have a right old battle in the scoring stakes and Cody Granaghan also hitting a fine score
But it looked like Bundoran were edging clear as they led by 0-13 to 1-7 eight minutes from time but Shane Griffin, Freddie Cullen levelled matters before Mulreany and Govorov swapped late goals to bring this titanic tussle to extra-time.