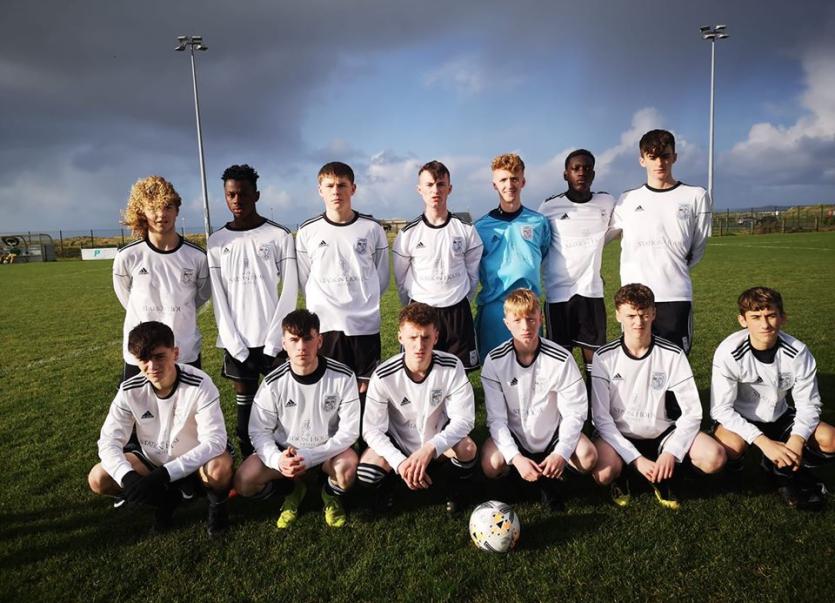 Letterkenny Rovers advanced in the FAI Youth Cup with an emphatic 6-1 win at Strand Celtic on Saturday afternoon.
Conditions promised to make things difficult for both sides with almost storm force winds battering the scenic grounds under the shadow of Benbulben but it was the Donegal side who made light of those conditions when taking the lead after just two minutes when Nathan Plumb was quickest to react after Adam Yisaus shot cannoned off the post after the lively winger did well to create the opening in the first instance,
That start could have been built upon with the lively Jack Dwyer going close before Strand came into the game and looked extremely lively in an attacking sense created a number of chances with Jimmy Monaghan, Matteo Melis and Eamon Flynn all forcing visiting goalminder Matthew Whoriskey into routine stops while Gavin McGee and Plumb also came close to extending Rovers lead.
With the wind increasing in strength it was imperative that Anthony Gormans charges would add to their lead before the interval and they hit a real purple patch hitting three goals in a ten minute spell right before halftime which almost killed off the Sligo teams hopes.
A marauding run and cross from Leon Doherty saw set up Jack Dwyer who headed home on 34 before home goalkeeper Andrew Conway failed to hold Gavin McGee's 37th minute free kick and it fell to Plumb who was razor sharp in burying the rebound.
Rovers were in dreamland on the stroke of halftime when Kieran Tobin fired low to the bottom corner after a neat swivel and turn.
Strand hopes of staging a comeback were very slight and they were all but over when Dwyer struck just two minutes after the restart to make it 5-0 when when Strands defence was in disarray after a backpass to their keeper and Dwyer nipped in to steal the ball and he had the easy task of firing into an empty net.
Rovers added another through a Plumb free kick as he completed his hattrick on 76 before Strand got a consolation late on when Caoilte Brannigan fired home from the spot after substitute Niall McDermott was upended in the box.
A satisfying afternoons work for Letterkenny will be at home to Tipperary's Peake Villa or Greystones from Wicklow in the third round at the end of the month.