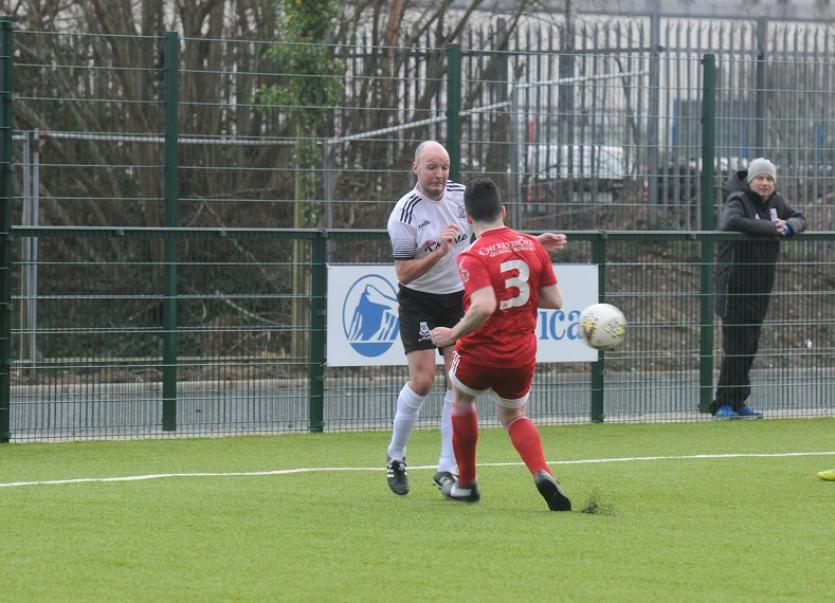 Aaron Kelly, from the penalty spot, netted the Cappry goal while John Sandilands scored the Kilmacrennan goal in a cracking and evenly contested game.

Cappry Rovers took a seven game unbeaten run into the game, played at the Letterkenny Community Centre all weather pitch. Kilmacrennan Celtic play some of their home games in Rathmullan, but elected to play this game in Letterkenny. The Kilmac side do have a game in hand and they are also unbeaten this season with five wins and three draws.

Cappry settled quickest and with former Donegal GAA star Frank McGlynn anchoring in midfield they took the lead on ten minutes. Aaron Kelly converted from the penalty spot after Alan Gethins came off worst in a tackle with Declan Donnell way out on the left hand side of the box.

It was the first real strike on goals from either of the teams and while John Sandilands went close three minutes later for the hosts.

But his strike from outside the box was turned away for a corner by Joe Boyle, the Cappry keeper, in what was a right good save.

Kilmacrennan also had a goal ruled out for pushing in the box and after the ball took a deflection off Kelly into his own net.

With Cappry dropping deep and well organised defensively Kilmacrennan’s  chances to get back in the game were limited for the remainder of the half and Cappry locked dangerous on the break.

The best chance fell to veteran midfielder Terence Shields but his half volley from a pinpoint Christy Connaghan centre was over the top.

On balance Cappry, who played against a stiff wind in the opening 45, were the better side and were full value for their 1-0 half-time lead.

The second half was a different story; Kilmacrennan were a different side on the turnover. Terence Shields sent out an early warning when his goalbound strike was cleared off the line within five minutes of the restart.

Kilmacrennan continued to press but with Cappry well organised at the back where Darren O’Leary and Brendan McLaughin showed great composure, scoring chances were few and far between.

Mark Friel went close with a header from a James Doherty cross and Terence Shields just failed to make full contact with an Enda McCormick centre.

Cappry played the last 20 minutes down to 10 men after Dean Kelly received his marching orders after picking up a second yellow card.

But despite being down in numbers Cappry held out until five minutes from time when Sandilands struck a clinker of a half volley from just outside the box after the ball broke in the Cappry goalmouth.

The defender just caught the ball on the sweet spot as it bobbled in front of him for a strike he will dine out on for years to come.