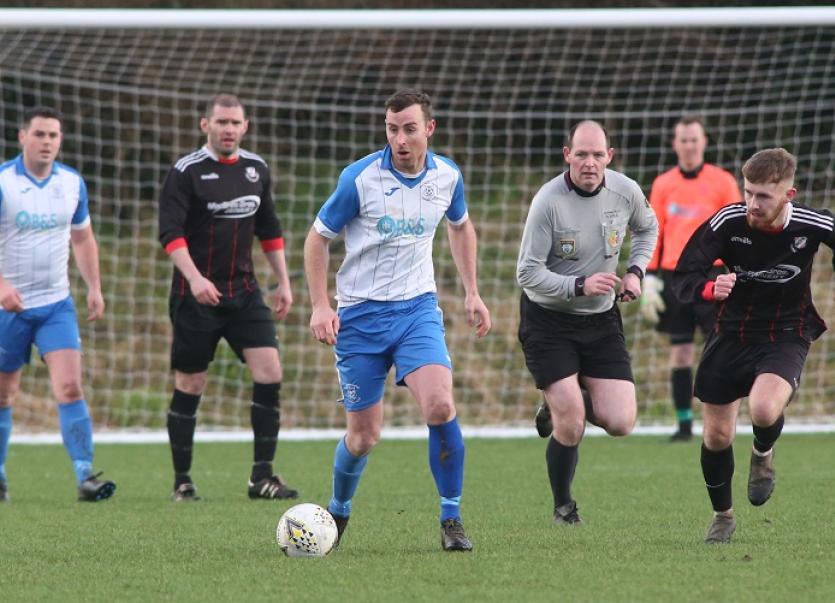 JP Malley scored two of the Convoy goals and John Doherty and John A Kee posted the other for Mickey Rodgers’ side, who are in second place in the Temple Domestic Division One League, one point behind leaders, Glenea United, with a game less played.

The win moves  them four ahead of Ballybofey United, who are in third place ahead of Rathmullen on score average. Both Ballybofey and Rathmullan are on 17 points.

Convoy  were the better side in the first half and led 2-1 at half-time after coming from 1-0 down after Damian Glackin scored the game’s opening goal for the locals.

The locals, who also lost to Rathmullan last week came out all guns blazing and despite playing into a stiff breeze took the game to Convoy. Minutes earlier McGowan, who was running the game from the middle of the field, had a shot blocked in a crowded goalmouth.

After going in front Ballybofey sat back and boy did they pay a price as Convoy took a firm grip on the tie and with Darren McElwaine and J P Malley buzzing up front they dominated the second quarter and would have gone in at half-time a little disappointed they were not further ahead.

Johnny Doherty headed home the first of the Convoy goals on  17 minutes from a corner. McElwaine and Malley had a number of chances before John Kee first timed to the back of Chris Patton’s net three minutes from the break.

Ballybofey started the second half as they did the first on the front foot and they were rewarded when Mark Griffin drove through on the right wing to slip the ball past Matthew Gallagher for the  equaliser.

But again the Convoy response was pretty immediate when Malley  ran on to a ball over the top and rounded the ‘keeper to edge the visitors back in front for a 3-2 lead. That was on 52 minutes.

But Balllybofey were not in the mood to roll over and it was all aboard again two minutes later when Mark Griffin again cut in from the right wing to beat Gallagher for the second time and a 3-3 game.

And with Ballybofey going all out for a winner they were caught on the break and with ten minutes to go  Convoy were back in front when Malley converted from the penalty spot and a 4-3 lead.

Ballybofey went all out for the equaliser once again in the closing minutes but they could not break down a resolute Convoy defence.

Another chapter in Convoy history was written in the game with the introduction of father and son Stephen Coyle and Matthew Coyle in the second half.