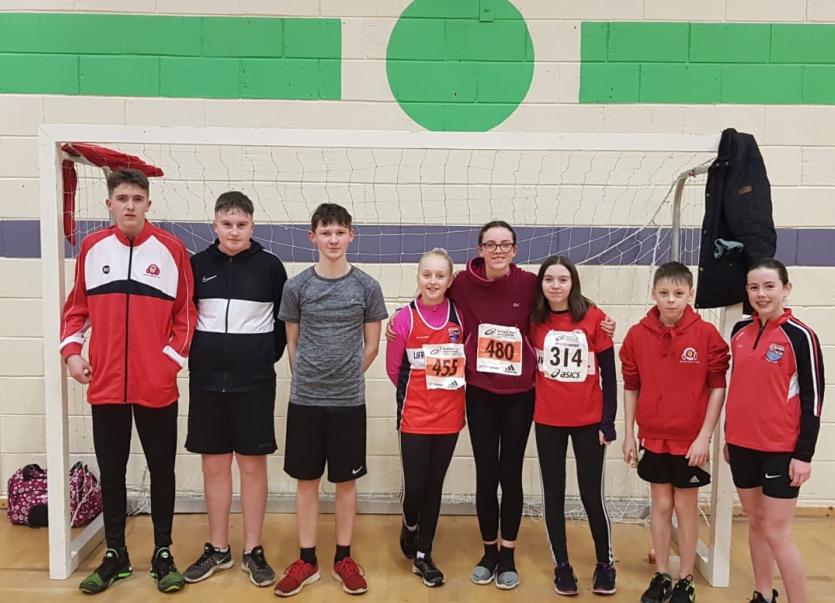 In was an early start at the All Ireland Indoor Combined Events Championships in the AIT Sports Arena, Athlone.  Lifford Strabane AC was represented by 5 juvenile athletes Ashleigh McArdle, Ella Costello, Chloe Costello, Emer McFadden alongside Finn O’Neill who made his debut in the Lifford Strabane AC vest at this competition with each athlete competing over 5 different events.  All our club athletes performed extremely well which resulted in two podium finishes & several personal bests for both Finn O’Neill & Ashleigh McArdle, which is an incredible achievement for both athletes & their respective coaches in what was an extremely high quality competition with large numbers competing in each event.

Lifford Strabane AC’s Finn O’Neill took a well merited win, placing an impressive 1st overall in the Boys U16 Championships.  This athlete achieved personal bests in 3 events out of 5 to finish with a total of 3511 points. Congrats Finn, well done on your excellent performance!!

For Ashleigh McArdle she too had an outstanding day performing consistently throughout the 5 events, resulting in 3 personal best performances to take 2nd overall in the Girls U15 Championships. Well done Ashleigh!!

All athletes are coached by Sharon Gallen and  Barry McArdle.

Mid week action commenced on Thursday 23rd January at the Ulster Sportshall Finals in Magherafelt, which saw 6 Lifford Strabane AC juvenile athletes make up the various teams representing Donegal in this event which were successful to progress to the UK Sportshall Final in Sheffield. Chloe Costello & Emer McFadden in the U13 Girls Team, Ashleigh McArdle, Harriet McCrossan & Elsa Moore in the U15 Girls Team with Diarmaid O’Donnell in the U15 boys Team. These athletes alongside their coaches will now prepare for the finals in April.

On Saturday 25th January the club had senior athletes competing at two separate events. First up was the NI & Ulster Masters Cross Country the club was represented by 2 senior lady athletes Claire McGuigan & Elaine Connor at this event were we witnessed another incredible performance from Lifford Strabane AC’s leading lady Claire McGuigan taking control of the race on the 2nd lap to be the overall winner in a time of 17:54 to take Gold in the NI & Ulster Masters Cross Country.  Elaine Connor had a strong run to finish 16th overall out of a field of 85 competitors in what was a very fast pace race over grass in 19:42!  Well done ladies & congratulations Claire on another superb run & win!!

Next up at the Irish life Health National Indoor Junior + U23 Championships Lifford Strabane AC’s Alan McGinley took to the starting line of the U23 Men 1500m race.  Alan finished in an impressive 3rd place overall to take Bronze in what was a very tactical race in a super time of 4:12.14!  Well done Alan.

Sunday 26th January:  The Northern Velocity-Dog Leaf Half Marathon was the venue for Lifford Strabane AC’s Seamus McAteer.  This course is run over trail terrain taking in the Roe Valley Country Park. Seamus finished in a time of 2:02:08.

On the same day  the final race to report on was our very own 5K race, the 2nd in our 3 Race Spring Series sponsored by Old Dalys XL, Lifford to which we thank for his ongoing support in this yearly event.  This race took place in Raphoe which saw 45 club athletes among the total of 206 runners/walkers line out at this 2 lap course, starting at the Chapel, taking runners/walkers towards the main road to Lifford before making a left turn towards the Letterkenny Road & following the incline up towards the Mart in Raphoe, with a finish in the Diamond.  This course proves to be a tougher course to Carrigans with most runners recording slower times on this 2 lap course!! Despite this club athlete Andrea Porter ran a personal best time taking over a minute off her previous best time to finish in a time of 23:29!! Well done Andrea!! Keep up the great work!!

It was a nippy January morning with a heavy hail shower prior to start which subsided until mid-race there was a slight rain shower to keep the runner’s cooler than they already were!! The runners battled with a chilly head wind on the incline which undone any gains they built up on the downhill.

Winner of the ladies’ race was this week again & merely 24hrs following her win at the NI & Ulster Masters Cross Country the exceptional Lifford Strabane AC’s Claire McGuigan placing 9th overall & 1st Lifford Strabane AC finisher overall, using this race as a recovery run from her triumphant race of the previous day.  Claire finished in an incredible time of 18:17!! Well done Claire!! Another athlete using this race as a recovery run was Elaine Connor who was next to the finishing line for the club in 19:32 placing 3rd lady finisher overall. 3rd senior female athlete to finish was Dympna Houston in a fine time of 22.02.

The first Lifford Strabane AC senior male athlete to the finish was Conor McLaughlin.  Conor finished 15th overall in a superb time of 18:39, Master athlete Michael Duncan was next to the line in a super time of 19:52 with the consistent Raymond Hoynes being the 3rd senior male finisher for the club in a fine time of 20:233!!

Young Wilson Craig was the first Lifford Strabane AC juvenile male & 2nd club athlete to finish in a fantastic time of 18:25 followed by the ever-improving Cormac Carlin finishing strong in a time of 19:02.  Taylor Neilands was the 3rd Junior Male club finisher in a time of 23:28!

First juvenile female club member to finish was the young Orlaith McCrory displaying another gutsy run to finish in a great time of 22:04!! Jaime McGinley was next to the line in 22:40 Followed by Holly Barr in 27:44.

A special mention to the group of juvenile athletes coached by John Craig that turned out in support of their club race today!!  Its always great to see the diversity of these athletes from competing previously on track, grass & now in the road races with many of them contending for category prizes!!  Well done to all!!

A massive well done to all who raced & congratulations to all those who ran personal bests!!  Special thanks to our club members and their families that took on the various roles of stewarding, registration duties and providing the array of food.  To Deele College, Raphoe for their hospitality and use of their premises and again to Liam Daly, Daly’s XL (Old Daly’s) for providing sponsorship for the 3 Race Series and his continued support.  Lastly, I would like to take this opportunity to thank Brendan our race director & all those that assisted with the race in such an efficient and well organised manner.

Next and final race in the series is in Lifford on Sunday 9th February 2020! See you there!!!!

Well done to all who club coaches and athletes that competed and represented Lifford Strabane AC over the course of the week. Congrats to all competition winners, category winners, medal recipients, those who achieved praiseworthy personal bests.  All at the club are tremendously proud of your achievements!!

Lifford Strabane AC’s Couch 2 5K programme continues on Tuesday & Thursday evenings at 6:30pm under the guidance of club coach Chris Cuskelly assisted by Olivia Cuskelly & Laurence Doherty.  The club was delighted to have such a large number in attendance with a few familiar faces making a welcomed return to the club. Well done to all who plucked up the course to embark on this programme!  We look forward to seeing your progression over the next few weeks!!

Sunday 9th February brings the concluding race in our 3 race 5K Spring Series sponsored by Liam Daly, Old Dalys XL, Lifford to which we thank for his ongoing support in this yearly event.  This race takes place in Lifford Starting at 10:30am. Registration in Lifford Strabane AC Clubhouse, Lifford. Results day of this race brings a party atmosphere to the event in previous years with music, singing & even some dancing for them that has the energy whist in anticipating the final 3 race results!!

For juvenile athletes aged U13+ training will be on both Monday & Wednesday’s 6:30pm – 8pm

All athletes should be on the track & ready to train at 6:30pm sharp!!

All sessions are coach led.

Lifford Strabane AC caters for all abilities.  All training sessions are coach led. We are a friendly bunch!! Feel free to join in. New members always welcomed.