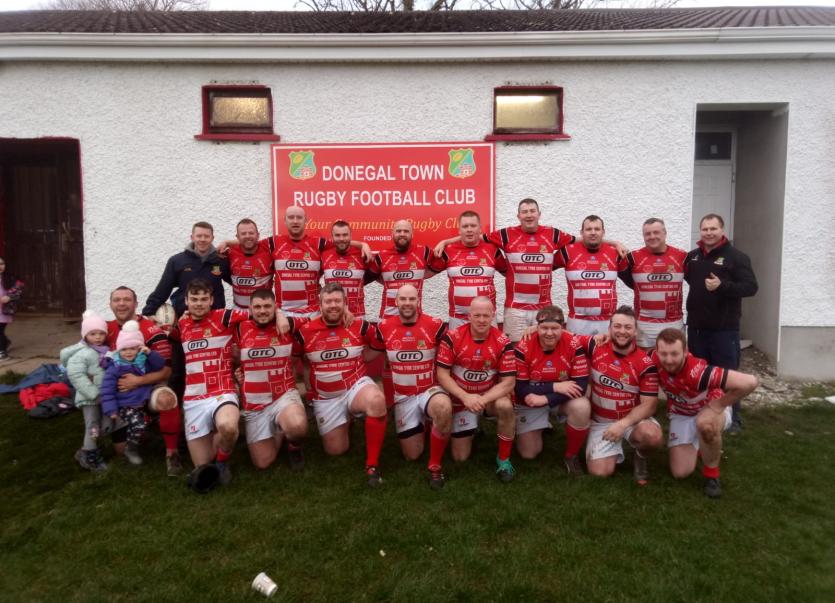 Donegal Town welcomed table toppers Ballyclare to the Holmes on Saturday and the visitors left empty handed.
Met Éireann issued a status orange weather warning for Saturday but it wasn't Storm Ciara who blew Ballyclare away on a wet and windy day.
Donegal Town RFC began the game strong and asserted their dominance in the contest early on. After an early knock on the home side were awarded a scrum and annihilated the visiting side’s pack.
Playing against the wind territory was keenly contested and Donegal managed to work their way into some favourable positions without capitalising on their possession.
Ballyclare worked their way into good positions and were unlucky not to cross the try line. This pressure led to a penalty, which the visiting side converted.
This was the only score of the first half and the when the whistle blew for half-time the contest was finely balanced.
The home side began the second half in a similar fashion to the first by establishing superiority through their pack. This led to turnovers in the visiting sides put in on the scrum; the home side blew the Ballyclare pack apart and on several occasions managed to turn possession over.
This dominance led to quick ball at the breakdown which led the home side into the Ballyclare 22. After a couple of phases of brutal carrying by the home pack Donegal back row Shane Patton bundled his was over the Ballyclare try line for the game’s opening try. A very difficult conversion was struck narrowly wide.
The visiting side knew they were in a game and used the wind at their back to kick themselves back into the home sides 22. Donegal infringed at the breakdown and from the resulting penalty the visitors led by a single point six five.
Donegal began to turn the screw, and through some heavy ball carrying from both their pack and backline, worked their way into Ballyclare's 22. A quick tap five meters from the try line was held up.
Donegal continued to endeavour and through phase after phase of carrying into a very well organised travelling defence led to several infringements at the breakdown.
The visiting defence tried to slow the Donegal attack down by diving over the rucks which led to another penalty from a very difficult position at the death of the game.
In a prevailing wind, with the odd hail stone thrown in for good measure Donegal scrum half Declan Bushell stepped up to the plate and dissected the posts to give the home side a massive victory.
Donegal Town RFC 1st: K. Anderson; J. Conway; D.R. Corrigan; C.Donaghey; S. McNulty; S. Patton; S. Gillespie; D. Gildea; D. Bushell; G. McMurray; P. Gillespie; L. Mosley; G. Marias; S. Pearson; F. Cullen; K. McGinty.