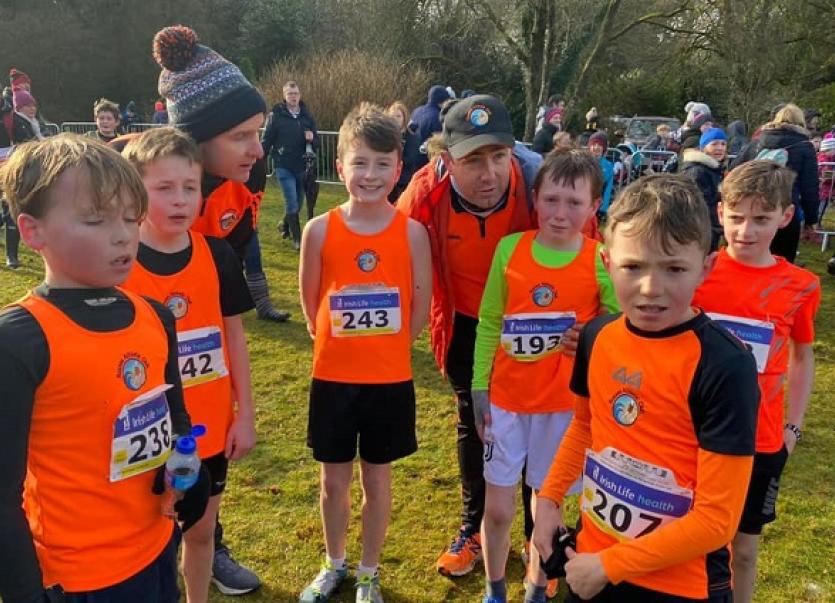 The weekend past was a busy weekend for the club with athletes travelling to the All Ireland Cross Country Juvenile B and Masters Championships in Wicklow. It was a long journey for the athletes but turned out to be well worth the trip as the U-11 girls secured a 5th place finish while the U-11 boys were crowned All Ireland champions and late in the day Helen McCready was to also add a gold team medal as part of the Donegal County team who won the national masters team title.
The girls kicked the day off with some brilliant individual performances and secured 5th placing. Saorla Freel was part of the Donegal team who secured county silver medals so a fantastic well done to her !!! This group of girls have all trained so hard since September and there will be big days ahead for this group.
The team was made up of Saorla Freel, Aoife McGonagle, Niamh Doogan, Eva Logue, Ruby McGee and Aoife Gallagher. Missing was Faela Houston who was ruled out but a key part of this group. The boys got out early in their race and stamped their authority on the race and grouped closely to land gold medals and become the U-11 all Ireland B cross country champions. This is a great reward for the boys who were without Leyton Greene who was ruled out unfortunately. The team was Eoghan O’Donnell, Jack McElroy, Odhran Rodgers, Tristan Greene, Odhran Boyle and Micheal Logue. This closes out the juvenile cross country season and what a way to finish.
A lot of happy athletes, parents and coaches. While the juveniles were having a great day in the early part of the day yesterday it was Helen McCready who was flying the flag for the seniors as she took part in the All Ireland Masters Cross Country Championships.
On the back of a great season individually, Helen had the option of running the Intermediate or Masters Championships and opted to do the Masters. Helen had a brilliant run to finish 9th place individually and be the 3rd team counter for Donegal who ended up taking gold medals and becoming the All Ireland Masters team winners.
Another great run and day for Helen who continues to improve and has had a great season and was capped with an all-ireland gold medal. Fodhla Mcfadden travelled to compete at the AAI Senior Indoor Games in Abbotstown where she took part in the Long Jump and finished a very creditable 8th place. It was another strong early season finish for Fodhla and another competition under her belt as she focuses towards later in the season and the outdoors.
On the local scene there was a number of athletes who travelled to the Lifford/Strabane 5k series to take in race 3 with good runs by Mark Ward ran 17.29, Manus Mc Hugh 17.33, Declan Gallagher 18.43 and Owen J Coyle 21.13. As part of the overall awards the following prizes were won by club members - Mark Ward 3rd Overall, Manus Mc Hugh 1st M40, Charlie O Donnell 2nd M40, Owen J Coyle 2nd M60.
Next Sunday Feb 16th there will be an in house club sportshall competition in the RCS in Dungloe. Please contact any club committee or coach member for details.