THE SPORTING DIARY: Should Donegal play all their games in Ballybofey? 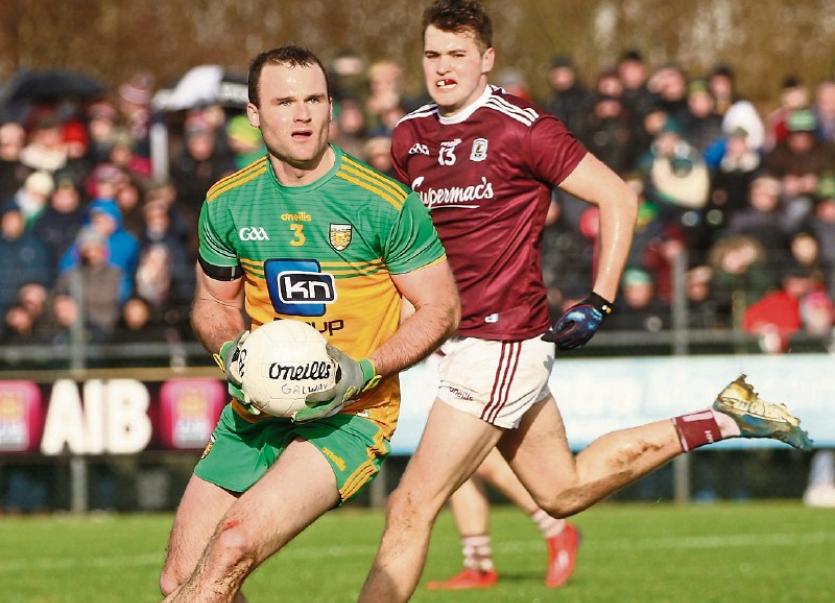 When Donegal went seven points up in O’Donnell Park, Letterkenny on Sunday, Ryan Ferry sitting beside me in the press box, opined that the Letterkenny bogey was finally going to be banished.

But, alas, it was not to be. Donegal failed to manage the lead and with 12 minutes of normal time left Galway were two points ahead. Try as they might, Donegal could not bridge the gap. They had chances but it just wouldn’t happen for them.

Ryan McHugh found Michael Murphy with a quick free but referee Joe McQuillan pulled it back; the advantage of quick thinking was not rewarded. Murphy fisted over for a point and the umpire raised the white flag, but the other umpire ruled that the Glenswilly man was in the 'square'. Then in the final play Ryan McHugh did really well to win a free off Paul Conroy, but Michael Murphy's free just curled outside the post.

It was a case of Murphy's Law. It wasn’t his day. Give the Glenswilly man 10 balls and you would put money on him nailing at least nine of them from that distance.

But it should never have reached that point. Donegal, once again, were unable to manage a game when they had a good lead and this time they paid an even harder penalty than they did against Mayo in the opening round in MacCumhaill Park.

Once again the record in O'Donnell Park, Letterkenny was put forward. There were calls from former players and Neil McGee, in an after-match interview, put forward a personal view that all league games should be played in MacCumhaill Park, Ballybofey.

It is an opinion that has support in many quarters but few say it in public forums. There is a very strong and loyal agenda to hold on to the hosting of county games in both Fr Tierney Park, Ballyshannon and O’Donnell Park, Letterkenny.

Would the agenda to have all the games in MacCumhaill Park be raised if the playing record was a little better in Letterkenny? The record is not the issue in Fr Tierney Park where Donegal have not lost since 2009; more related to the spectator facilities and geographical location. O’Donnell Park in Letterkenny has good spectator facilities but its location can cause traffic and parking issues.

Both Letterkenny and Ballyshannon have great organising committees who run the National League games with military precision. That is not in question. MacCumhaill Park has most going for it. Donegal's record there is excellent; the venue is central for all supporters and subsequently it attracts the biggest crowds. Ballybofey also has the greater seating accommodation and with National League admission at €20, that has to be a major factor.

I'm being the devil's advocate here. As a member of the press, I don't have an issue with any of the three grounds; all go out of their way to accommodate the press.

It is a discussion that takes place most years. And, unfortunately, it usually gains momentum after games at these venues.

The more important question is: Would playing all of Donegal's National League games in MacCumhaill Park be more beneficial to the county's chances? Should Donegal be relegated from Division One at the end of March, will the venues used for home games be put forward as an excuse?

Imagine a time in the future when there will be nothing but praise for GAA referees. Don’t expect that to happen any time soon.

Time keeping was a major issue at the weekend with managers not happy at Croke Park, O’Donnell Park or Pairc Taillteann in Navan.

But the issue around the red card received by Kerry’s young captain David Clifford received the most criticism. The allegation was that with Clifford on a yellow card, Tyrone put on a substitute who got involved with the Kerry player and they ended up on the ground with Clifford looking an innocent party. The referee, Fergal Kelly, consulted his umpires and issued two yellow cards which meant that Clifford was also shown red.

How many times have we seen this happen where a defender and an attacker are in a wrestling match and both get yellow cards. It is the easy option.

My thoughts went back to a couple of years ago in Ballybofey when Kevin McLoughlin hit an equalising point for Mayo (after 13 steps). Before Donegal could take the kick-out Mayo players hauled the nearest Donegal player to them to the ground and there followed a full minute of mayhem with the referee and linesmen trying to restore order. And then when the kick-out was taken, the official, Anthony Nolan, blew the final whistle.

What was missing from the armoury of Fergal Kelly on Sunday last and Anthony Nolan in Ballybofey two years ago was an ability to read the game on the hoof. Tyrone and Mayo bent the rules to their advantage and got away with it.

It happens all the time. Remember how Kerry and Aidan O'Mahony 'marked' Michael Murphy in the 2014 All-Ireland final. On Sunday last Kerry were the victims, but as we all know in Donegal, they are well versed in the dark arts as well.