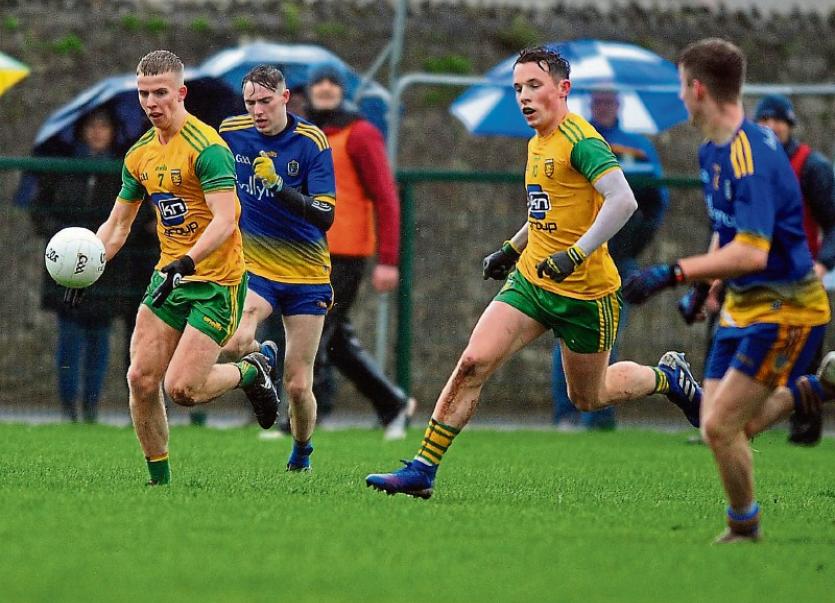 Donegal are into the white heat of the Ulster U-2O championship this Saturday when they face Monaghan in a quarter-final clash in MacCumhaill Park. (Throw-in 2 pm)

Donegal are managed this season by Shaun Paul Barrett, who took over from Gary McDaid. Barrett, an Ulster minor winning manager, was appointed to the position after some confusion on McDaid's term was for two or three years.

Donegal go into the game on the back of a mixed Leo Murphy U-20 Development League campaign - away draws with Derry and Mayo and a narrow one point win over Roscommon.

“We drew with Derry in Celtic Park, a game we should have won and we beat Roscommon on a very wet and windy day in Ballyshannon,” said Shaun Paul Barrett.

“That win set up a winner-takes-all tie with Mayo in Ballyhaunis. We were very disappointed not to win that game after leading by two points going into the closing couple of minutes. Mayo scored two late points to draw that game which was disappointing.”

Missing out on a final place and a meeting with Louth and the extra game apart, Barrett was pleased enough with the league campaign.

“It was never about winning the league. The league was never the target from day one, it was all about trying fellows out and building a team for the championship and from that point of view we are happy enough with the league.

“Though we had players missing through injury and school competitions we looked at a good number of players and a number of lads stepped up and took the chance.

“As we prepare to sit down now to pick the team (for Saturday) we have a number of lads that were down the pecking order at the start of the year who have played themselves into contention.”

Donegal have benefited from a lifting of the recommendation that ruled out players in schools’ football, i.e., MacLarnon and MacRory Cup competitions, playing in the U-20 championship.

“It is a big help; we have three lads playing with Loreto, Milford, Conor Coll, Rory O’Donnell and Jonny McGroddy, in the MacLarnon Cup and if the recommendation was in place we would not have them.

“They are all very good lads and brilliant footballers and are important members of our squad.”

However, there are no members of the St Eunan’s College MacRory Cup team in the Donegal U-20 squad.

“We have a number of players from St Eunan’s club but nobody from St Eunan’s College. Shane O’Donnell was out with a serious hamstring injury at the start of the year and was not available.”

Donegal are also without the injured duo of county seniors Oisin Gallen and Conor O’Donnell, Carndonagh, a member of last year's U-20 squad. Gallen and O’Donnell are long term injured.

However, Naomh Columba’s Aaron Doherty, who was a member of Declan Bonner’s senior squad last season, is back on board this season.

“It is good to have Aaron back. He is a class player and he has a great attitude and he really works hard in training and is a great leader in the dressing room.”

Monaghan go into the game on the back of a good run in the U-20 Development League. They won their section with wins over Armagh and Westmeath and a defeat by Cavan before winning the Philly McGuinness Cup following a final win over Longford.

“Monaghan are not only favourites for Saturday’s game but are also hot favourites to win Ulster.

“They have won the last two Ulster Minor Championships and have four players who are in the senior squad and played in the McKenna Cup.

“Aaron Mulligan is their top forward and has played in the league for the Monaghan seniors and they are a quality side.

“We are well aware of the challenge we face on Saturday but we have prepared as well we could and we are happy with our preparations. The lads have worked very hard and are looking forward to the challenge.”