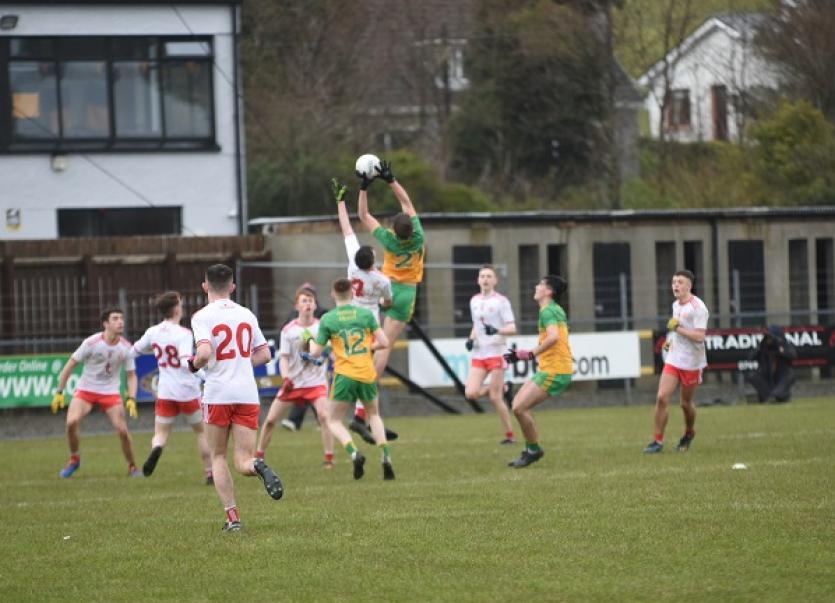 Donegal suffered their first defeat of the season when going down to Tyrone in O’Donnell Park this afternoon by two points.

Blake McGarvey top scored for Donegal with a goal and three points.

Tyrone, who suffered a 2-10 to 0-4 first round defeat to Cavan,  started well and had the first three points on the board. Team captain Sean O’Donnell posted all three points from close in frees.

Donegal, who made three changes from the team that drew 1-5 to 0-8 against Sligo in the first round,  had to wait until the 18th minute for their first score and only score of the half. Blake McGarvey converted a close-in free after Cian Rooney was fouled

Rooney, Jack Boyle, Conor O’Neill were the three new men into the team; Tiarnan McBride, David Boyle and Luke McGlynn are the players that made way.

Donegal upped their performance in the second half and McGarvey goaled from a penalty and Conor O’Neill and  Daniel Gilfdea landed long range points.

But with Canavan in tune from frees and a Liam Ryan goal meant that the Red Hands prevailed with two points to spare at the finish.

Canavan and O’Neill exchanged before McGarvey converted from the spot after he had been dragged down after good approach play from O’Neill and Senan Quinn.

But the Tyrone response was swift and they were three up again thanks to a flicked Liam Ryan goal. The big full-forward got the faintest of touches to a Canavan centre as he rose high with Ben Miller. Tyrone were 1-7 to 1-4 up again as the game entered the fourth quarter.

Donegal through O’Neill and McGarvey did reduce the margin to one again before Canavan and Cush closed out the game with late points.

Donegal are away to Cavan next weekend.