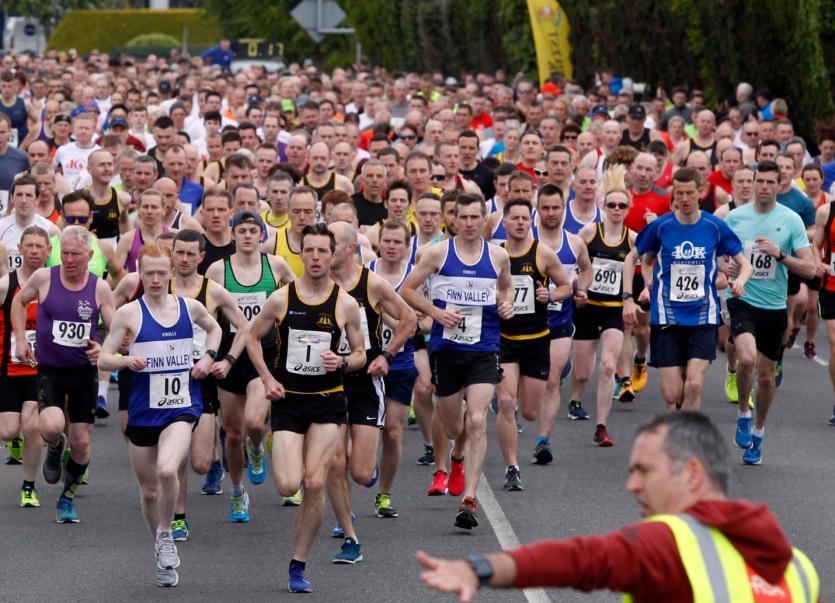 The start of last year’s North West 10k in Letterkenny. This year’s race has been postponed until later in the year Picture: Brian McDaid

The co-ordinator of the Donegal Athletics Grand Prix Series says he’s confident we’ll see some racing action in the county this year.
However, Brendan McDaid has urged athletics clubs, community groups and charity organisations not to reschedule any dates for their 5k or 10k road races without consulting the county's athletics board.
A number of high profile athletics races have been postponed as sport remains on hold amid the ongoing coronavirus outbreak.
The North West 10k - scheduled to take place in a month’s time, has been postponed - as has Cara Bundoran, two of the biggest races on the sporting calendar.
The North West 10k traditionally marks the start of the Grand Prix season and this year there were over 60 races planned.
Some however, have already fallen by the wayside.
“We expect many more to be postponed,” Brendan McDaid said.
“I know the organisers will be keen to have them rescheduled until later in the year, but to be honest, there's little point in coming up with a new date until we know exactly when we can return to action.
“Nobody really knows just how long this is going to last.
“The last thing we want is for clubs and organisations to announce that a race is being rescheduled to a certain date and then for that date to be changed again.
“We really should sit tight. Let's see what happens in the weeks ahead and maybe look at things then again.”
When the North West 10k was postponed a number of weeks ago, the organisers pencilled in a new date in September, only to discover that it clashed with the Derry Half Marathon.
As it stands, the hope is that the North West 10k will take place later this year, but the exact date has yet to be confirmed.
In the meantime, Brendan McDaid is encouraging runners and athletes to continue training where possible.
“There is plenty of coaching advice on social media and our coaches in different clubs are sending out their own coaching plans,” he said.
“Even though you must train at home, there is still plenty you can be doing, and loads of advice on the Athletics Ireland website.”