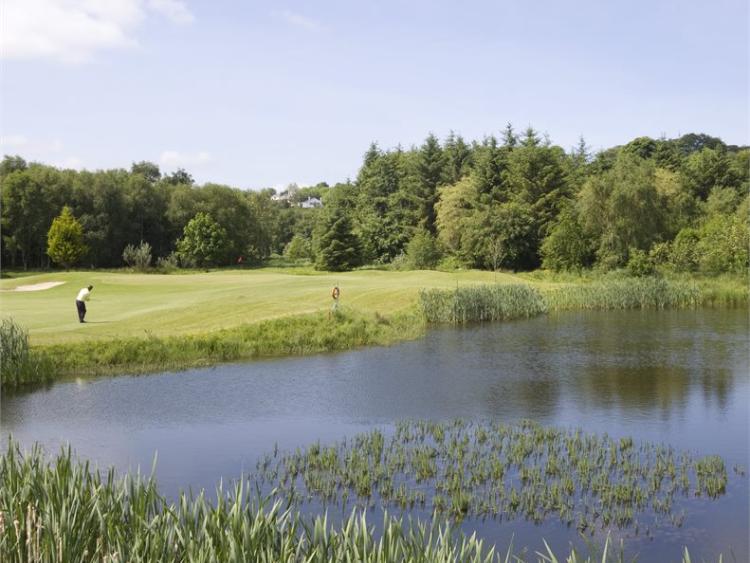 Chipping onto the green at the 9th at Barnhill

Barry Ramsay, Honorary Secretary at Letterkenny Golf Club, outlines how the club is preparing itself for a return to some normality when restrictions are eased for the sport from next week

All clubs have had their good times, their difficult times, but none have ever experienced the type of pandemic currently in vogue.
Letterkenny Golf Club was established just before the onset of the first world war in 1913 and went on to flourish in the following years following.
Initially the club was based on just 20 acres at Crievesmith - the land now occupied by a housing estate, Rann Mor.
The club moved in 1967 to the 146 acres of Barnhill on the opposite side of town. A proud boast is that it was the first 18 hole course designed by Eddie Hackett who went on to design most of the courses in Ireland. His masterpiece was later embellished by Declan Brannigan.
The major problem in the years before the advent of the 21st century was the playability of the course in the winter. This resulted in one dreadful year in 1985, when after a period of incessant rain, the course was left so wet that the Captain’s Prize, the premier competition of any year, could not be played until a generous offer was made by Rosapenna Golf Club to hold the outing there.

The event was the catalyst to ensure that never again would the members of Letterkenny have to rely on the generosity of another club to stage Captain’s Day again.
The improvements started then have ensured that the need to play Captain’s Day elsewhere has not materialised since, and the course is now playable all year round. 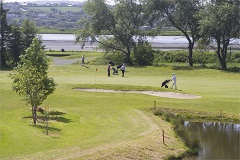 On the green at Letterkenny Golf Club

It is interesting that the time leading up to the First World War was a period of great activity when many clubs were established, so much so that for a time after this very few came into existence.
The years following the advent of Covid-19 will no doubt herald a period of change, the like of which we can only guess at. Sadly, a number of clubs have ceased to exist, although none locally I am pleased to report .
The shutdown which happened on Government instructions in the middle of March meant that the key was turned on the course, the clubhouse, restaurant, bar and shop.
Noreen Patton, who was about to take over in the bar/restaurant from Browns on the Green, has to hold off until the current restrictions are lifted on June 29 for the restaurant with the shutters of the bar set to be lifted on August 10. 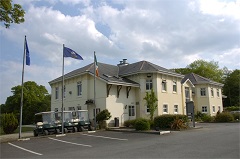 The clubhouse at Barnhill

The shutdown has not been without benefits as the essential work on the course has been able to continue at a great rate.
The Greens Convenor Colin Morrow, who is responsible for the course, had two greenkeepers working. Head greenkeeper John Neely, assisted by Michael Doherty, have been able to work with no interference from players and have been able to carry out quite a bit of work.
The have overseen the blasting of drains so that any blockages have been released and others had their rate of flow increased.
The greens have been hollow tined and sanded. Similar work has been carried out on the tee boxes. This work allows the compacted soil to expand and air and moisture to be more easily absorbed. The coring helps to address the problem of thatch - a layer of grass which stems roots and debris that settle and accumulate over time. A thin layer is acceptable but too much thatch will hold water like a sponge.
The work also allows for over-seeding and a light sanding which brings back the trueness to the greens.
The greens staff have also been working to remove thatch from the fairways which will allow rain water to percolate down off the surface. The fairways have also been sanded for drainage purposes - vital work that can be carried out without any player interference. 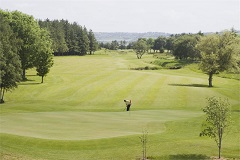 Staff were also also engaged in repairing and enhancing some of the 17 bridges on the course. John and Michael were joined by Cliff Malone and Jason Neely who are employed for the summer from the end of April. The rate of growth of grass has continued as nature continued on her own sweet way .
A funny incident occurred on April 24. A small group of members who live within 2km of the course were assisting the greens staff in filling in divots with sand and seed when two members of the Gardai appeared on the 7th fairway.
It transpired that an eagle eyed local had spotted the members and thought they were playing golf. The Gardaí investigated what was going on and that those involved were observing social distancing. With a cheery wavem they allowed them to continue with their labour of an essential nature.
Sadly, during this period of lockdown, two former Lady Captains at Letterkenny Golf Club passed away - Muriel Kelly, Lady Captain in 1976 and Deenie Roughan (1988). The usual tradition of honouring them with a Guard of Honour could not be carried out because of the restrictions of Covid-19. Guards of Honour are one of the few traditions of the club that remains to this day.
Part of our new learning has been that regular meetings of committees have continued unabated through the use of Zoom.
This has been a boon to the secretary as each meeting lasts just 40 minutes and means that discussions have been succinct and to the point, allowing minutes to be recorded in much shorter time than usual. A case perhaps of an ill wind blowing some good.
There will no doubt be other good things to come out of all this.
While the course has been in shut-down local wild animals have had a field day. Among those spotted during the day, when they would have only been seen previously at dawn or at dusk, wertr foxes, a badger and mink. Of course the ducks have been at peace from flying golf balls landing in the lakes and causing their families of up to eight chicks to take evasive action. The eels and small trout have been free to swim at their leisure.
The phased return to golf has been set by GUI/ILGU for May 18 with the approval of the HSE and the Government . This permission will be withdrawn if clubs are found to be in breach of the guidelines.
Our two Captains, Ed Margey and Celine Marky, have shown true leadership to ensure that their club will not be found wanting. Along with their committees, they have laid down strict rules and have plans to monitor members to ensure that they obey all protocols for this return to casual golf initially, with competitive golf starting on June 8 if all goes well.
Clubs are well able to monitor their courses as anyone who has ever tried to go out without playing the green fee can tell you .
The full protocols can be viewed on www.Golfnet.ie and the Letterkenny details can be seen on the club’s website www.Letterkennygolfclub.net.

The lovely note handed to gardaí