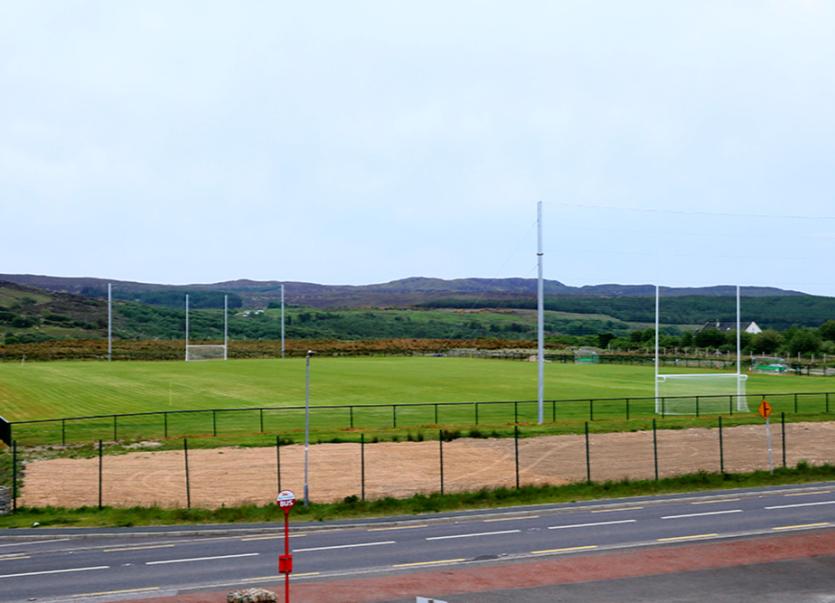 In the first of a new series featuring some of Donegal’s GAA clubs, Donal Reid has visited the Na Rossa club

“William L Micks, the first Secretary of the Congested Districts Board, reporting from the Union of Glenties in 1891, recommended for the convenience of the people of Lettermacaward, a passage over the Gweebarra, by a work partly a causeway and partly a bridge, would be of the greatest service, as it would afford a ready access to the railway at Glenties, and also to Portnoo…
“Indeed, the lack of a bridge led to valiant efforts on the part of the women of Dungloe as they tried to make their way to the market at Glenties with their knitted goods in the early years of the 20th century, as described by Glenties author Patrick MacGill in his novel The Rat-Pit…

“MacGill describes how the women waited for low tide in the Gweebarra Estuary before traversing the estuary in great terror, with their knitting held high over their heads and their skirts tucked up as they waded into the icy water” (askaboutireland.ie).

People had to be tough back then. When I was doing my research for this article, I went down a few rabbit holes which I found so interesting but truly shocking.

I read a brief piece about the famous author Patrick McGill from Glenties and about Paddy ‘The Cope’ Gallagher from Dungloe. McGill was sent to Strabane to a ‘hiring fair’ by his parents after he finished school. He was the first of eleven children born into a poor farming family. They did it out of necessity as many families did back then.
“At Strabane he entered a hiring fair where labourers would display themselves rather like slaves at a souk and hope that they would be hired for six months at-a-time by a generous, or at least kind, farmer. He was employed as a farm hand which meant he had board and lodgings and could afford to send money home. Probably about £5 in 6 months!” (allpoetry.com).
Paddy ‘The Cope’ recalled in his memoir: “I was ten years of age in 1881. The year before had been a bad one for work in Scotland and my father hadn’t enough money to pay the rent and the debts. It was the same with the neighbours. A crowd of us were got ready for the hiring fair at Strabane”.

It’s unbelievable that these so-called “fairs” survived into the 1940’s in both Strabane and Letterkenny. 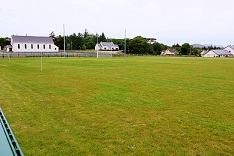 The Irish western seaboard and particularly the north western seaboard suffered great hardship through the centuries of English suppression. Yet, the people always showed resilience and still do today.
Much of the land is barren and infertile. Drive around our Donegal coastline today and one will see the stunning natural beauty that is unequalled anywhere in the world.

Only last year, I went touring from Doochary, through Leiter, over the Gweebara Bridge and into Narin and Portnoo. That day I discovered one of the most dramatic and stunning beaches ever. 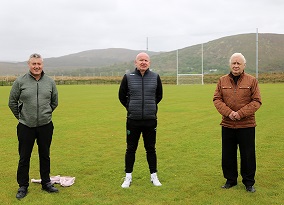 On my way home, I noticed a massive sand dune in the distance. As a I drew closer, I saw GAA goalposts. I was taken aback that a football pitch existed amongst such a beautiful and scenic landscape. It was only when I was almost at the pitch that I realised that this was the home of Na Rossa GAA club.
I ended up in a small car park adjacent to the field. A sign read ‘Dooey Beach’. What I saw stunned me. After all the years of playing football in Dooey, I never knew that a hidden gem was there all the time.

To be honest, beaches didn’t come into my thought process in Dooey because football took precedence. I loved playing in Dooey because it was harsh, raw, unforgiving but always fair. Red Hughs and Na Rossa have had some titanic battles down the years and never once was there a bad word between the teams. Those were the times when both teams played from Division 1.
It was always the practice that players and supporters met at the Gweebara Bar for light refreshments after the games where we all mingled whatever the result. A couple of hours easily passed. The famous ‘Gweebara Bends’ may have gone but I still remember having ‘the bends’ occasionally after a match in Dooey!
Dooey pitch will soon be no more. The Na Rossa club had been, for years, actively seeking a new ground where access and egress to a club pitch would be easier for everyone.

Enter Mr. Michael Duddy. I contacted Michael about the current development which is all but completed except for small bits of housekeeping around the magnificent new playing field and dressing rooms.

He was hard to pin down regarding his efforts in acquiring the land, the negotiations that ensued and refused to acknowledge his role in what sits on the main Leiter road today. I have my sources though and I understand that Michael and Kevin McCready were to the forefront of this project. There were others too who were very much a part of it all. There will be a grand opening one day in the not too distant future where, I have no doubt, all participants will be acknowledged.

In the early 1990s, a portion of land of 14 acres came on the market, opposite the chapel in Lettermacaward. The Na Rossa GAA committee decided that the location was ideal to build a football pitch. Funds were raised, and the land was purchased.

The committee didn’t proceed, for varying reasons, with the development at the time. Twenty years passed, and the Wills Bros civil engineering and construction company were engaged to build the new N56 adjacent to the purchased land. Will’s needed a place to build offices and to store machinery, and Na Rossa needed a playing pitch. So, a written agreement was entered into between Na Rossa and Wills Bros, which gave both parties what they needed. It was a game of politics but Wills bros and their staff were very cooperative where both they and the Na Rossa club facilitated each other.

A perfect working relationship was formed. Wills built the new pitch to Na Rossa’s specifications but there was still a lot of work to be done. Funds were still needed. An application for Sports Capital Aid was successful and additional funding, at a later stage, from Roinn na Gaeltachta along with direct funding from the Na Rossa club ensured that the job was completed.

On a very personal note, I know that this project may never have succeeded without Michael. Michael has been an avid Donegal and Na Rossa supporter from well before I knew him.

We met for the first time after a Na Rossa versus Red Hughs game in the Gweebara Bar where we were having soup and sandwiches washed down with a few pints.

He enthused about his club and Donegal. He was always very kind, generous and most of all, very humble. Michael Duddy endeared himself to anyone who ever met him. He was always jovial and his affable nature is a characteristic that many of us would love to have.

He had a great business acumen and worked hard to grow his high-quality timber business. Michael attended all Donegal matches during my playing time and he would always be there after the game to say “hello” to the players. We all knew him and we all held him in high regard.

Even in defeat, he was there to offer a kind word that was so well appreciated. He was never judgemental and could see only good in people. He is still the same today.
There are unsung heroes in every club who rarely get any acknowledgement or want any credit. We have scores of them all over Donegal.

Michael Duddy has a heartfelt and genuine interest in his local community especially in his club Na Rossa. We spoke a few times on the phone this week where he said that he was adamant about providing for the youth of his locality.
The Na Rossa club is squeezed between the larger clubs of Naomh Conaill and Dungloe. The pickings are scarce. Na Rossa, like many clubs in Donegal and particularly in those rural coastal communities, has found it difficult to sustain itself since its foundation in 1976.

What I see in Na Rossa is typical of the resourcefulness, the resoluteness and the battle-hardened attitude of those people whose lives were never comfortable or easy. That they have a club at all is commendable. Clubs like Na Rossa are the backbone of our Gaelic Athletic Association.

Michael and his project partners have left a great legacy for the youth of Na Rossa club. The new pitch in Leiter near the mouth of Gweebara Bay is currently lush green. The dramatic backdrop of distant mountains provides a beautiful setting.

I sense that Michael Duddy is very proud of his community and his club. In June 2017, Michael lost his wife and soulmate Grace. The inter-county players of my generation also knew Grace very well. Her hospitality and kindness towards us are very much appreciated and I know that I speak for all of the players, especially those of us who were guests in her home from time to time.

I know that Michael’s and Grace’s eight daughters were shell-shocked at the untimely passing of their mother. Those of you who know Tonya, Georgina, Danielle, Martina, Michelle, Mary, Catherine and Helen will know that their parents gave them a very solid and a very loving upbringing. Grace also left a beautiful legacy for her family.

From a very personal perspective, it has been a pleasure and an honour to write today’s column. Too often, things are left unsaid. I would like to wish Na Rossa every success in the future and hope that this is a new beginning for the club.
I would also like to thank Michael Duddy and his family for giving me permission to write this article.
Go mbeannaí Dia sibh