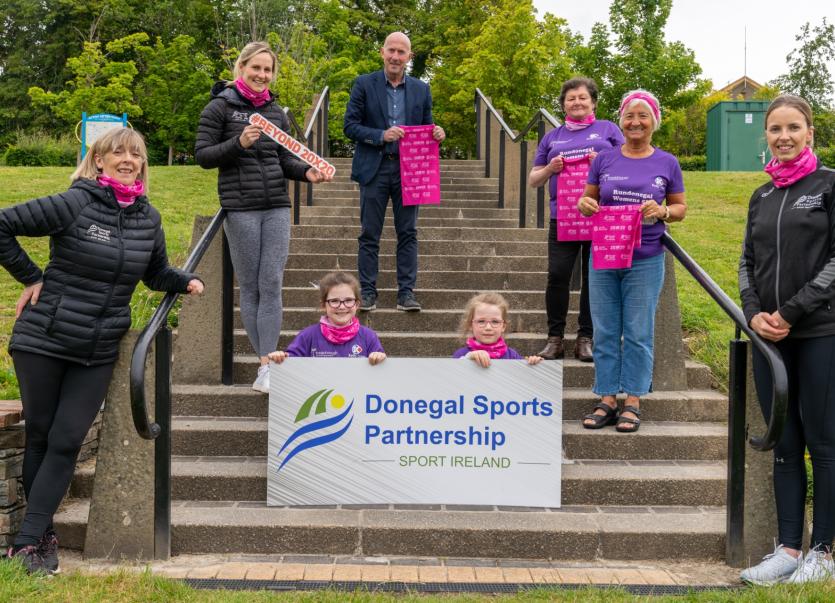 There’s growing interest in the 2020 RunDonegal Women’s 5K scheduled to take place on Sunday, August 23rd, with over 100 entered to date.

Because of the ongoing Covid-19 restrictions, organisers of the annual charity event are staging a virtual version of the race this year. The first 700 who register will get a top quality technical T-shirt and a pink Women in Sport 2020 head scarf, while those who enter online will have their T-shirt and head scarf posted to them for a total cost of €13. Registrations are also being taken at the Finn Valley Centre, with the fee being €10.

“We are extremely happy with the level of interest in this year’s race so far. We have over 100 entries and there’s a good buzz building,” commented race organiser, Grace Boyle.

Speaking this week at Letterkenny Town Park where the head scarves, provided by Donegal Sports Partnership through their Women in Sport Programme, were unveiled, she added: “We are still hopeful that we might be able to hold an event on the day for the participants from the Finn Valley area. 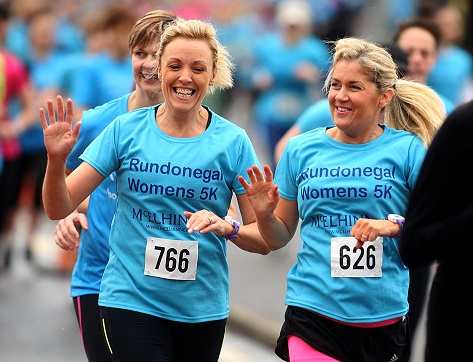 A smile and a wave during one of the recent RunDonegal 5k events PICTURE: THOMAS GALLAGHER

"This will, of course, depend on the regulations that will be in place at the end of August. The virtual option gives people the opportunity to run or walk the distance in their own locality. Our message is the same as ever – get out, get company and get training. The plan is, for where possible, people start their 5K on Sunday, August 23rd at 11 am,” she added.

The proceeds from this year’s fundraiser will go to the Brid Carr Fund which was set up in memory of the late Brid Carr to fund ovarian cancer research. A native of Glencolmcille, Brid lived in London with her husband, Seamus and children Christina, Anna and Tom. She passed away from ovarian cancer in 2014 aged 54.

“Brid was misdiagnosed on a number of occasions and was acutely aware of the lack of funding for ovarian cancer research,” Grace commented.

Ovarian cancer affects around 400 women in Ireland every year. It is one of the poor prognosis cancers, is difficult to treat and notoriously resistant to chemotherapy. Survival rate is poor and unfortunately figures in this regard have not improved a lot over the last 20 years.

“Researchers in the Cork Cancer Research Centre (CCCR) are working on exciting new therapies and are close to a breakthrough that will revolutionise the way ovarian cancer is treated. Over the past five years, we have supported the CCCR in this research by the means of sponsoring a three-year PhD scholarship in ovarian cancer research. The successful candidate, Jennifer Quinn, is extensively involved in this research. She has now completed her studies and we have agreed to fund her for another 12 months so that she can complete her research,” she added.

“Once again, we wish to acknowledge the generous sponsorship of Tim Kelly of the Kelly Group in London. He has sponsored the T-shirts again and has been a sponsor for all four RunDonegal 5K events from which the Brid Car Fund has benefitted. Sadly, Tim’s own sister, Fiona, passed away from ovarian cancer. We also extend our thanks to Peter McGinley, Euro Diamond Drilling from London and Carrick for sponsorship in the past. Other sponsors of this year’s event include Donegal Sports Partnership, MCM, Ocean Knowledge and the Finn Valley Centre.”

Donegal Sports Partnership Coordinator, Myles Sweeney, said that they were delighted to continue to support this special event as part of their Women in Sport Programme 20 x 20, with the main aim around closing the gender gap to participation in sport at all levels in Ireland.

Myles mentioned other programmes such as the Beyond 20 x 20 Women in Sport Leadership and the Girls in Golf Programmes which were also being rolled out by the DSP this year.

“Given the increase in sport and exercise participation over the last number of months, we hope the Run Donegal Women’s only 5K will attract a big entry for what is a really worthwhile cause,” he added.

To make a donation to the Brid Carr Fund, log on to