'Glenswilly and its people are an an inspiration to rural clubs' 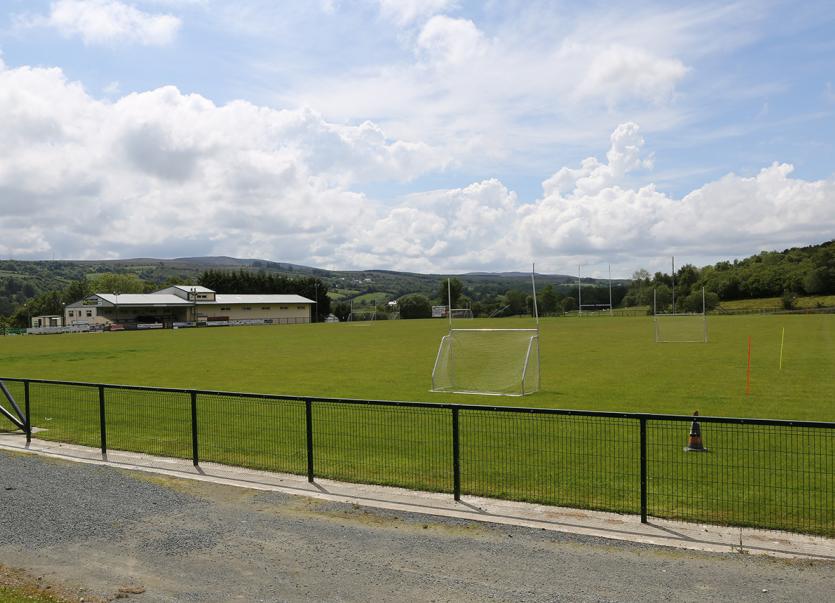 There have been many’s the high leap in Pairc Naomh Columba, Glenswilly but, none matched that of Colmcille when he jumped from the top of Cnuic-a-Toighe (Cnocatee) to land “one hundred yards east of Churchill Station on a flat rock” in the townland of Drumcavaney.
The imprint of his feet is there to this day.
The names Colmcille and Columba are used interchangeably since they are the same person. Columba is a Latin version of Colum. The 'cille' suffix that was added to the end of his name means 'of the churches'. I understand that ‘Colmcille’ also means ‘dove of the church’.
Saint Colmcille is one of three Patron Saints of Ireland, the other two being St. Patrick and St. Brigid. Glenswilly GAA club obviously hold him dearly since their grounds bear his name.
I spent a full day travelling around Glenswilly earlier this week going from townland to townland in search of my grandmother’s homestead. Her name was Brigid Kelly. 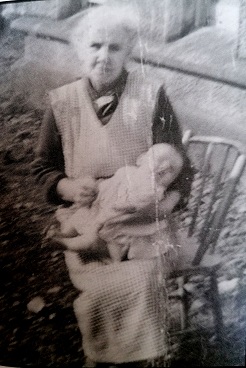 The name Kelly is synonymous with Newmills and Glenswilly and it was quite a challenge to find my stable. It was a bit like being on that television series ‘Who do you think you are’?
After much help from Margaret McGeehan, we located the Kelly homestead at Killpheck. Nothing of the original house remains. A few outhouses and barns have taken its place but it was still great to see the actual place where my grandmother was born and raised. It’s a stone’s throw from Glenswilly Catholic Church.
Brigid Kelly was born on October 3rd 1890. She was the eighth of twelve children. She married my grandfather Patrick Reid from Drumkeen or Lettermore (a townland near Drumkeen) on November 12th 1914. They moved to Knockfair just out past Stranorlar and Ballybofey golf club sometime later.
Granny Reid had nine children, six boys and three girls. Two of the girls died in tragic circumstances in 1931 and 1945, aged 1 and 28 respectively. My father never spoke about these deaths. At the best of times, he found it difficult to express himself and obviously talking about such sad events was too much for him.
Granny passed away in February 1986 aged 95. She is buried along with most of her family in St. Patrick’s graveyard at The Cross, Killygordon. 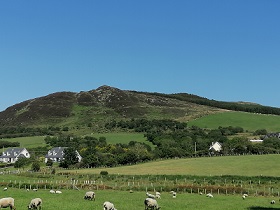 Cnocatee hill in Glenswilly which has strong links to St Colmcille

I learned a lot this week in respect of the Kellys, St. Colmcille and of course Glenswilly GAA Club. I found out that my grandmother’s brother Patrick Kelly, married my grandfather’s sister Margaret Reid. It took me a bit of time to figure this out because of the name ‘Patrick’ but I’m there now.
As I crisscrossed Glenswilly, I stopped to visit some local places of interest. The local little chapel, St. Columba’s Church sits on a hill overlooking the Glen. I’m sure this is where my grandmother Brigid Kelly married Patrick Reid back in 1914. The church was beautifully restored in recent years. There’s an impressive stained-glass window of St. Columba behind the altar which throws different shades of light into the church interior. The church grounds are meticulously maintained and the lawns meticulously manicured.
From here, I made my way to St. Colmcille’s place of Baptism in Templedouglas or Tulach Dubhghlaise (Mound of the Dark Stream). This mound is contained within the walls of Templedouglas graveyard. The ruins of a 16th century monastery is also present there.
St. Colmcille was apparently “a wild man.” In 563, Colmcille and twelve monks sailed from Derry to the island of Iona. Iona is situated off the west coast of Scotland. Colmcille was going into exile. The cause is said to have been his involvement in the Battle of Cúl Dreimhne in County Sligo. The story is that Colmcille secretly copied a psalter belonging to St Finnian at Movilla. King Diarmaid was asked to determine the owner of the copy. King Diarmaid ruled as follows: 'To every cow her calf and to every book its copy.' This gave ownership to Saint Finnian.
Colmcille was very angry and he persuaded his royal kinsmen to rise up against Diarmaid. Over 3,000 warriors were killed in the battle. As a penance, Colmcille left Ireland forever” (askaboutireland.ie).
He remained in Scotland for most of his remaining thirty-four years. At the monastic settlement in Iona, he built up a large community devoted to prayer, study and physical work. Information about St.Colmcille may be inaccurate because I’ve read differing versions of his life. I am sure though that he left a lot of his fighting spirit with the Glen men who have put Glenswilly on the map.

Glenswilly
Glenswilly or Gleann tSúilí is located about 8 miles from Letterkenny on the way to Glenties and Churchill. You won’t find a sign anywhere reading ‘Glenswilly’ because there is no town or village. The parish of Glenswilly and Templedouglas has a magnificent community spirit. The people are very close-knit and are tremendously proud of their locality. They are very definite about their parish boundaries.
Glenswilly and their people should serve as an inspiration for other communities and particularly other rural GAA clubs. Rural Ireland has been decimated by so-called progress in Ireland in recent times.
Glenswilly, like many country areas, has a rich history which has been lost somewhat as a result. The beautifully preserved Newmills flax and corn mills serve now as a tourist attraction. It is certainly worth a visit, if only to see how this was a necessary and thriving industry once upon a time.

The River Swilly, which rises near Glendore mountain and meanders through the leafy Swilly Valley, serves to power the mills. It’s difficult to imagine that near here at this tranquil place of Newmills, a fierce battle took place in 1567 between the O’Neill and the O’Donnell clans. It was known as the Battle of Farsetmore which claimed hundreds of lives.
The Glenswilly landscape is dotted with neat white-washed and stone-built Irish traditional cottages. The rugged hills surrounding the valley provide breath-taking views of the glen. Life was obviously tough for the people in the past but they have survived to emerge from those hard times of former years to tell the tale.

Supporters pictured along the sideline at Páirc Naomh Columba, Glenswilly

This is particularly borne out through their GAA Club. They are hemmed in by St. Eunans, Naomh Conaill, Termon and Glenfin. Their pickings are light.
Glenswilly GAA club’s short and recent history is truly remarkable. Founded in 1982, the club went on to win the Donegal Intermediate Championship in 2005 and three Senior Championships in 2011, 2013 and 2016. They won the Minor B county championship in 1998 and two U-21 B Championships in 1994 and 2003.
The club also has a Ladies team which won the county Junior title in 2006 and the Intermediate title in 2007. Their most recent success was in 2017 when the ladies won the county Junior B championship.
Glenswilly GAA is very active in Scor Na Og Nuachleas and have been very successful down the years winning several Donegal and Ulster titles. But their crowning glory came in 2007 when they won the All-Ireland title.
I had never been at Pairc Naomh Columba until earlier this week. I was genuinely taken aback with the impressive facilities and magnificent expansive pitch. I’m sure there were and will be plenty of tough battles on this tremendous park, particularly with neighbouring clubs.
The club is debt free which is a credit to the community. They have been supplying players to the Donegal inter-county scene since 1994/95. The first player was Daniel Gallagher whom I brought into the U-21 Donegal set-up when I was manager. Quite a few famous names have emerged since, as well you know.
I was very well received by the people of Glenswilly last week who provided a lot of information for the writing of this article and I’d like to thank them for their hospitality. I promised them that I’ll visit them one day soon to find out more about my bloodlines.
Until then, go mbeannaí Dia sibh.