Celebration time for Shane Dolan's side 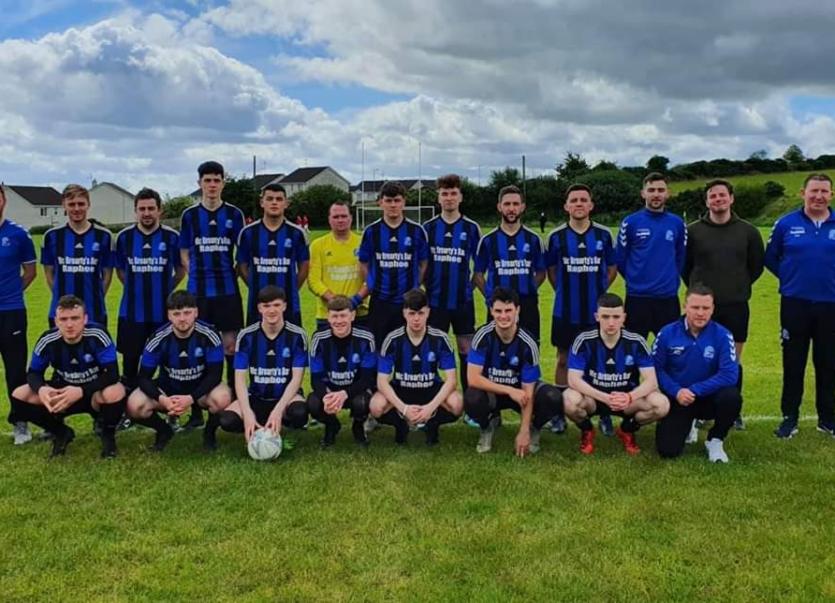 Raphoe Town are celebrating promotion to Division One

Beaten in the promotion/relegation play-offs last season, Raphoe Town are celebrating tonight after securing their place back in Division One of the Donegal League.

The East Donegal outfit gained promotion from the Donegal Physiotherapy and Performance Centre Division Two following a 4-0 win over Glenree United on Sunday.

They are second in the table behind Swilly Rovers who look certain to clinch the title with two games still to play.

But Raphoe moved four points clear of third place Whitestrannd who have only one game left to play. And that means Shane Dolan’s side will be in Division One next year.

On the first weekend back after lockdown, Raphoe were too strong for bottom of the table Glenree and goals from Christy Bogle, DJ Kelly ,Dean McConnell and David Craig rounded off a fine win.

In the other game in the division, Corey McCahill scored twice and Kieran Cunningham got the other as Lagan Harps beat Deele Harps 3-1.

There was only one game in the Temple Domestic Appliances Division One as St Catherine’s hosted Ballybofey United at Emerald Park.

Ballybofey may have been hoping to catch the teams above them and sneak a play-off finish. So the 1-1 draw in Killybegs won’t have helped their cause. They went ahead in this game through Damien Glackin shortly after half time only for Ryan Cunningham to level the game for St. Catherine’s.

The battle for league honours in the Brian McCormick Sports Premier Division is proving very interesting with each of the leading four clubs holding out hopes of claiming silverware.

All four of those sides played on Sunday - and each of them made a winning return to action.

The leaders Kilmacrennan Celtic had to battle hard before overcoming Keadue Rovers 2-0.

Celtic were in front after only five minutes Michael McLaughlin converted a penalty following a foul on Seami Nani Friel which saw the Keadue keeper red-carded.

Despite that set-back, Keadue played well, but conceded a second midway through the second half when McLaughlin added his second.

Kildrum Tigers came from behind to win 3-1 against Drumkeen United.

In a match played at the Curragh, goals from Jamie McKinney, William Lynch and Kevin McHugh secured a good win for the Tigers.

Castlefinn Celtic were 2-1 winners over Bonagee United to stay third in the table. Aaron O’Hagan and Shane Gallagher got the goals for the winners.

Second placed Cappry Rovers enjoyed a 4-0 win over Cranford in the early kick-off at Cappry Park. Sean McBride scored a hat-trick as Cappry picked up another big win. Ronan Coyle got their other goal.

Ronan McHugh scored twice as the Hospital Field side won 5-1 to move level on points with Milford at the bottom of the table.