Natasha Kelly - a force of nature in Donegal sport

Natasha Kelly started as a Gaelic footballer; starred as a basketballer but is now concentrating on triathlon and duathlon. Peter Campbell caught up with this bundle of energy this week 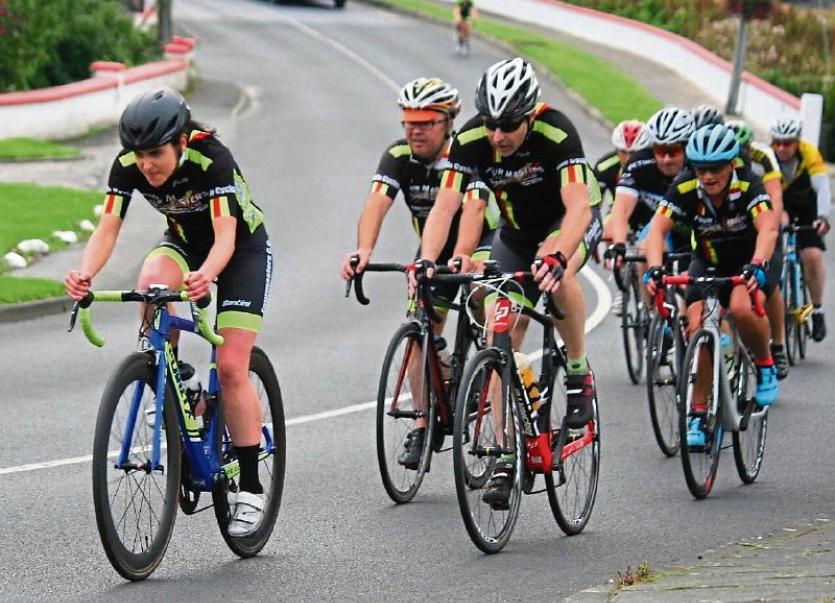 For any athlete, the recent lockdown came as a big blow with no competition, but one force of nature spent the 10-week period in her own training camp in Glencolmcille and is ready for action when competition resumes.

Natasha Kelly's present speciality is Triathlon or Duathlon and she is aiming for the World Championships in 2021. She celebrated her 27th birthday this week and reflected on the recent lockdown and also on her sporting transition from Gaelic football to basketball to triathlon.

Back in February she was special guest at her former National School, Cashel NT, to present awards after the school were winners of a Donegal Sports Star award.

After the arrival of Covid-19 and the lockdown, Natasha found herself in Portugal on a two-week training course and after coming home had to do a two-week quarantine in Letterkenny, where she now lives.

"I moved back home to Glen for 10 weeks and had my own wee training camp down there and no one was bothering me. It was nice to be in Glen and be with mum and that.

"It was disappointing with things being cancelled right, left and centre," said Kelly.

"I had plenty of hills around Glen. There are hills and wind. There were hills that I didn't ever know were there and the wind, it was crazy."

"People would have seen me out twice a day, cycling in the morning and running in the evening.

"The locals took a lot of interest which was great. I know at the start they thought I was an absolute lunatic and they probably still do. But it was nice for them to be asking how things were going and different things like that," said Kelly, who added that her mum, Carmel, joined her for some of the runs.

Her younger sister Rachel was a champion Irish dancer while her other sibling, Dylan, also younger, plays with Naomh Columba.

Around Glen and Kilcar it is mostly GAA and you wouldn't get many cyclists there.

This week she reflected on what has been a great sporting career so far. She started out, as most sports people in south west Donegal, playing Gaelic football with her home club Naomh Columba, but it was basketball that would really take her fancy.

"I always loved training but I hated playing football matches.

"I don't know what it was about football. I loved training, but when it came to a match; I remember being handed a starting jersey and my heart used to sink. I would say 'ah no'."

"I remember in National School in Glen, David Cannon from Kilcar came in to do basketball training with us and I just fell in love with basketball.

"I always said that when I get to secondary school I would do everything I could to get on the basketball team. I remember in first year I didn't actually make it on the team. I was devastated but I kept going to training. I probably wasn't meant to be there, but I kept going.

"I went to a Summer Camp in Donegal town that summer. Myself and Rachel Doherty got the half seven bus to Donegal town and we didn't get home to half seven that evening."

From second year until she left Coláiste na Carraige Natasha was a starring member of the school basketball team, reaching four All-Ireland semi-finals and one All-Ireland final. During that time she would have been picking up awards every year as player of the year and most valuable player awards in many matches.

"Patrick McBrearty and Ryan McHugh would have been a year below me at Coláiste na Carraige. I remember me and Ryan taking chunks out of each other playing basketball. I would have been around that type of people and I would always found myself playing with the boys to get more of a competitive edge.

After secondary school, Natasha went to Tralee IT. "I came home for the Easter holidays, went to Gaelic training with the Ladies team and tore my cruciate and I was devastated. I just thought that everything was thrown away at that stage.

"I suppose coming up to the operation I did a bit of cycling to build up the knee for the operation and afterwards, cycling was good for rehab and trying to get back running again.

"I was a bit apprehensive about going back to competitive sport again.

"I got a move up to Letterkenny IT as a placement and they were trying to start up the women's basketball team again. I got involved in that for a bit of craic and a bit of fun. I went to that and ended up reaching the North West Cup and League finals."

Then at work during the summer she met Jason Black, who was asking her what she was going to do next.

He said: "I hope you don't mind but I think you would make a great runner, with the right physique. I looked at him and said 'Nah. I don't think I would be a runner, too boring.' And he said, there is a Triathlon Club there, why don't you try a triathlon.

"So I went home that night and I didn't know what a triathlon was, but I signed up for the 'Try-a-Tri'.

I couldn't swim and I didn't own a bike and I had very little running experience. I learned how to swim, bought myself a bike and that's basically how I got into triathlon.

"And I didn't go back to basketball after me joining a triathlon club for a bit of off-season training."

So what's in the pipeline for this go-for-it athlete?

"This year I was looking to qualify for the World Duathlon championships which were to be held in September but they have been cancelled. They are rescheduled next year for Amsterdam, so the goal remains the same.

"Over lockdown, I kept training, telling myself that it was going to happen. I remember Patsy McGonagle saying you just keep the focus, because your competition will not be backing off. Those three words kept with me, 'keep the focus'. It will happen. I don't see any of this training going to waste; it will all benefit me in some way."

She trains with Four Masters Cycling Club, Letterkenny 24/7 Triathlon Club and with Finn Valley AC, with whom she works as a Development Officer, visiting primary schools in the county and coaching.

Looking forward she is hopeful that there will be a few Duathlons in October and November and also the cross-country season in athletics is due to take place around that time.

On the cycling front the annual 'Round the Houses' event is planned for Ballyshannon on August 13 and if it goes ahead, she hopes to take part.

"Hopefully it goes ahead. I went to watch it last year and it was class. It clashed with my championship last year and I wasn't able to take part."

There is another string to Natasha Kelly's bow as she has worked with some of the top teams in the county in her role as Sports Therapist.

She qualified in Sports Therapy and among the teams she has worked with include Gaoth Dobhair GAA team who won the Donegal and Ulster club titles in 2018.

"I was with Gaoth Dobhair when they won the Donegal title and Ulster as a sports therapist. It was great to be involved with such strong minded people. I like that type of people; I like that environment which is intense, getting the best out of each other. Tempers can fly, but it is all for the one reason. I really enjoy that environment."

She has also worked with the County U-20 team and Coláiste na Carraige and more recently with Letterkenny Gaels. "They got promoted last year and are gelling nicely and want to do well," she says.

If you were able to bottle the enthusiasm that emanates from Natasha Kelly, it would light up the world.

Everything about her is positive. Let's hope she gets to expend that energy on the roads in the next few years.