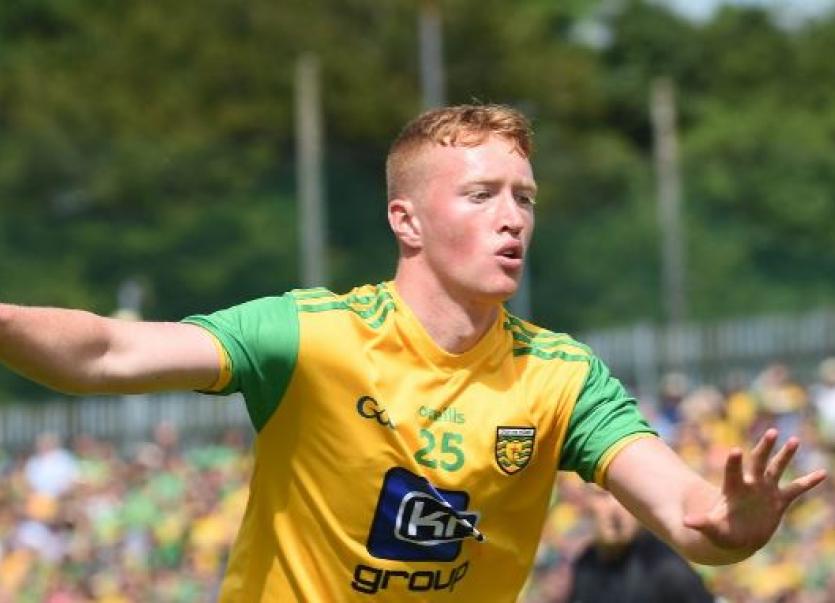 There was a battle of sharpshooters in Gaelic Park, Bundoran between Oisin Gallen and Jamie Brennan.

Bundoran came from behind late on and almost got level but MacCumhaills held out for a good win.
The Realt na Mara boys were without the suspended Ciaran McCaughey but having Jamie Brennan back was a big bonus.
He finished with 0-10 and Gallen almost matched him with 0-8 in a really exciting contest.
MacCumhaills had a whirlwind start with two points in the opening minutes. Luke Gavigan pointed after 20 seconds before Oisin Gallen pointed a free for a tug off the ball.
Bundoran got on the board when Timmy Govorov was fouled and Jamie Brennan pointed the free. And a few minutes later Brennan had Bundoran on terms when firing over with his left.
An overcarrying decision against MacCumhaills gave Jamie Brennan the chance to edge Bundoran on 11 minutes.
The sides were back on terms a few minutes later when Chad McSorley won a free for Oisin Gallen to point. And Gallen won a free a minute later and pointed to put the Twin Towns men back in front before the water break.
Oisin Gallen had his fourth point of the game when won and converted a free from the 45m line but Bundoran responded with the lively Timmy Govorov pointing. Gavin Gallagher was sent to the sin bin for a tackle in the move.
Bundoran were back level when Jamie Brennan winning and pointing a free to leave it 0-5 each after 24 minutes.
Oisin Gallen converted again on 29 minutes and Steven O'Reilly doubled the lead in a very open game of football.
Three minutes into added time Oisin Walsh won another free and Jamie Brennan cut the deficit to the minimum but there was time for Oisin Gallen to fire over his fifth point as Connie Doherty called time on the opening half.
Half-time: Bundoran 0-6, MacCumhaills 0-8
Padhraic Patton got the first point of the second half for the visitors before Gallen had MacCumhaills' 10th point. Jamie Brennan responded in their personal scoring battle.
Rory Mulligan was almost in but he got a push as he went for goal and the ball came back off a post. Oisin Gallen easily converted the 13m free to put his side 0-11 to 0-7 ahead.
The lead was cut after good work by Jamie Brennan, Darragh Hoey and Govorov as Oisin Walsh pointed.
MacCumhaills took a firm grip on proceedings when Steven O'Reilly was on the end of a good move to flick to the net and a 1-11 to 0-8 lead as the second half water break was called.
MacCumhaills lost Ronan McMenamin to a black card as two Jamie Brennan frees cut the lead to four.
Brennan found the range again from a 45m free before Oisin Gallen was denied at point blank range by Ashley Mulhern.
In the third minute of added time Shane McGowan cut the lead to two. Niall Carr won the kick-out and Jamie Brennan snapped it over to leave just a point in it.
Gallen had the final point from a free but in the final seconds Darragh Hoey had a half goal chance but blazed well wide.