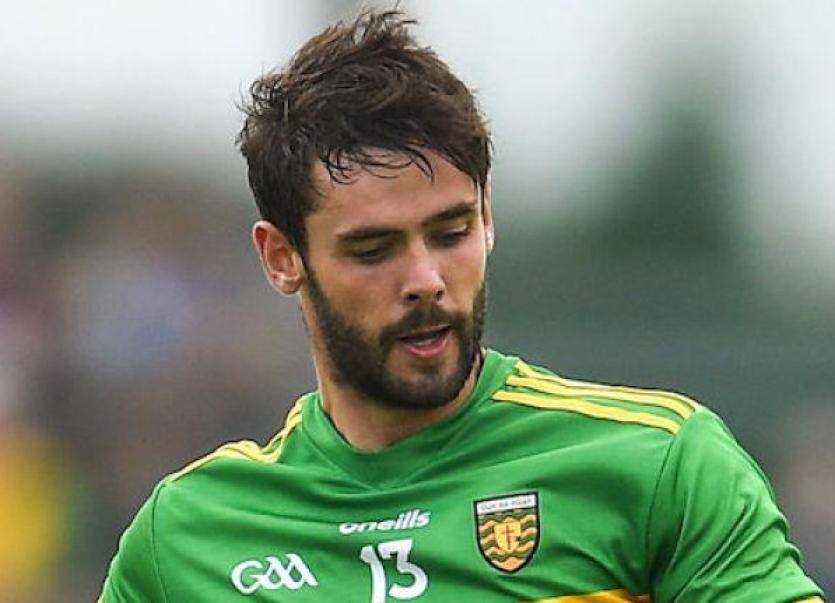 Odhrán Mac Niallais . . . on the mark for Gaoth Dobhair

The unfancied home side gave the Gaeltacht gladiators quite a battle for the first 25 minutes and only led by a point on a score of 0-5 to 0-4.
But a high ball into the Four Masters defence was broken down by Gavin McBride and Kevin Cassidy scrambled the ball to the net.
That came against the run of play, but it set the winners on the victory path.
They led led by 1-8 to 0-4 at the break and even though Masters tried hard in the second half, they were no match for the wonderful Odhran MacNiallais who won and superbly converted a penalty in the final quarter.
Young Kililian Faulkner stood out for Masters up from and keeper Martin Cassidy saved three certain goals.
But Gaoth Dobhair’s greater power and panache were just too much for the home side.
Gaoth Dobhair had a whirlwind start as Cian Mulligan and Odhrán MacNiallais combined beautifully to set up Ethan Harkin who swung over a delightful point after just 8 seconds.
Harkin and Kevin Cassidy were involved again to set up Cian Mulligan for a second point in the second minute.
There were visions of a rout, but a determined home side settled down to give the hot faourites a great contest for 25 minutes.
Killian Faulkner settled the home side’s nerves with a well struck free in the 8thminute.
Harkin extended Gaoth Dobhair’s lead but Faulkner struck back with a well converted point from play in the 7th minute.
We then had a seven- minute famine before Eamon Collum got another point for Gaoth Dobhair.
But spirited Masters made a real fight of mattes for the next ten minutes as Gaoth Dobhair hit four wides and had two good chances of goal superbly denied by Masters keeper Martin Cassidy.
The first chance fell to Kevin Cassidy in the 15th minute but the other Cassidy brilliantly denied the feisty veteran.
And he performed similar epics three minutes later as he smothered Cian Mulligan’s effort.
In the meantime, Gavin McBride extended Gaoth Dobhair’s from a free to make it 0-5 to 0-2 for the visitors.
But gritty Masters hit back with two points from Kevin McBrearty and Caolan Loughney to leave Gaoth Dobair leading by a mere point by the 25th minute.
But all changed utterly in the next five minutes as MacNiallas lofted over a superb point and Kevin Cassidy benefited from a great catch from Gavin McBride to flick the ball to the Donegal Town net.
Suddenly Gaoth Dobhair were ahead by 1-6 to 0-4.
Two further points from Friel and Collum left Gaoth Dobhair leading by 1-8 to 0-4 at the break.
Scores were traded between Faulkner and McBride in the third quarter with Michael Carroll and MacNiallais also finding the target.
But once again Masters keeper Cassidy made a superb save by flicking a point- blank Niall Friel shot around the post.
Gavin McBride imperiously converted the 45 as Gaoth Dobhair led by 1-12 to 0-7 by the 45th minute.
The final quarter was a bit of a canter for the winners who leisurely tacked on six more points to ensure an eventual easy victory.
But plucky Masters should not be too despondent as this was their best display this season.

FOOTNOTE: Gaoth Dobhair did not have their latest recruit Michael Lynch as his case has not been yet decided, despite reports that a Hearings' Committee meeting was held on Wednesday night.
He and the Gaoth Dobhair chairperson and secretary were facing a 12 week proposed ban from the Donegal CCC arising from aspects of his transfer from Naomh Colmcile to Gaoth Dobhair.