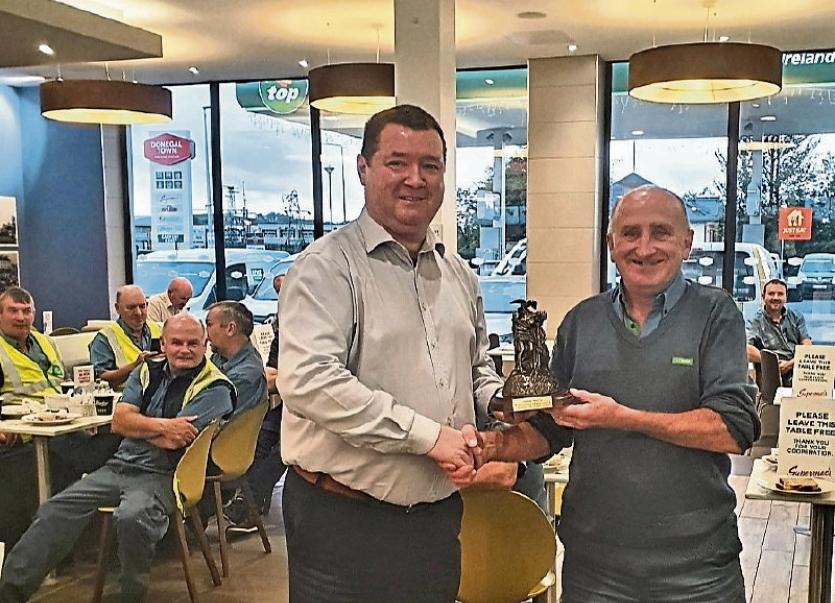 Andy Doherty delivered his last letter on Friday last in the Kilcar/Carrick area but will continue to travel many of those roads for a long time to come in his running gear.

They call him Andy the Postman in Kilcar and Carrick but in his native Ballybofey he is known as 'Drew'.

For 42 years he has been employed as a postman and for 40 of those years he has served in Kilcar - where he made his second home and where he is greatly regarded for the work he has done in those years.

On Friday morning last, his colleagues gathered at the the Donegal Service Station at Drumlonagher, Donegal Town for a farewell breakfast and a presentation.

Now Andy, who was used to getting up early every morning for his daily routine, will have to adjust to a new life.

"I will have to be doing something different. You will only sit for a while," he says.

And anyone who knows Andy, knows that he will not be sitting around, most likely doing what he does for a hobby, road running.

"I will have to get used to not getting up early in the morning," said Andy, who said that he usually started around eight and had to go to Donegal Town to collect the mail and do his deliveries.

"It has all changed now. The mail used to come down to Carrick at one stage."

Looking back, Andy says there have been other changes too. "In the beginning it was slack enough whenever I started. Then it got busy through the boom times. But since Covid-19, the parcel end of it has shot away up. The actual mail part went down a wee bit.

"Shopping online is a big thing now. Nearly everything is done online now."

The story for Andy began in 1978 when he joined the postal service in Donegal Town just after school.

"I was a little over 16. I spent two years on Donegal Town. I started in what they called a Junior Postman. I was in the office and I was going around delivering telegrams, emptying the letter boxes around the town, doing messages.

"They had to be emptied at special times so you would go around and collect them.

"There was a pile of clerks and postmen; they would have been the guts of 30 in the office at that stage.

"I'm originally from Ballybofey. There just came a vacancy up in Kilcar and I was sent down there to cover until they got sorted out."

And the posting lasted for 40 years.

Asked did he do something wrong to be sent to Kilcar, he laughed. "No, I don't think so. I was due to go up to the postman grade anyway. That was the only post that was available."

In Donegal Town Andy did deliveries on the main mode of transport at the time, the bicycle.

"Whenever I started I got to do the town post, around the Diamond and that end. Then for the holiday work, I would have done different work. I would have had the bike and was out around Barnesmore and Leghowney and out around Drimarone.

"In the second year I was out on a bike for the summer, out towards Laghey and that route.

"I've spent 40 years then around Kilcar and Carrick."

But apart from his job as a postman, Andy is known throughout the county as an athlete, taking part in road races and cross-country.

"It was always in my life. I was a member of the Finn Valley club and I would have ran as a youngster.

"It was mostly people from up around Ballybofey and John McGroary from Drimarone was one of them. He was one of those who was supposed to do the marathon, but I don't think he did. He took up hill walking instead; he took the easy way out," laughed Andy.

"Once I got back into it, it was just my hobby then.

"I would have about six marathons done altogether, but I would have done most of them in the '80s. Then there was one in 2006 but the last one was the Wild Atlantic one about two years ago, Killybegs into Glen. I done that the first year it was held.

"I just said I have been running around them roads, I might as well do that. From Killybegs into Carrick is a tough stretch; once you get to Carrick it is not too bad. There was a lot of climbing," said Andy, who said he never had a bug to go outside the country to do marathons and most of them were in Dublin.

"I was involved in cross-country races and in road races. You would be running against the likes of Danny McDaid and Neil Martin and boys like that and boys from down the country.

"Ah, you weren't really near them but when you took off after them, you had to try to run to keep up with them. You just didn't want them to get away too far from you.

"This last couple of years I just enjoy the running. I don't go out to try and break any records or win any medals. You just do as well as you can; if you run well, you run well, if you don't, you don't."

Andy has been out of action in recent months due to a slight injury but it will not stop him.

"Hopefully, I'll get back to it soon."

His contribution to the Finn Valley Club was outlined by Patsy McGonagle, who said that Andy has been involved in the club since the very start.

"And even though living in Kilcar, he is still involved and always available to help out and officiate.

"Andy would have been one of the first athletes in the county to take up road running and many thought those people were mad, but now everybody is doing it."

From a family of eight, Andy has six sisters living in the Ballybofey, Castlefin and Letterkenny area and a brother in Monaghan.

But now that he has time on his hands after serving as a postman for 42 years, Andy will be need some new footwear to keep on doing what he loves - running.