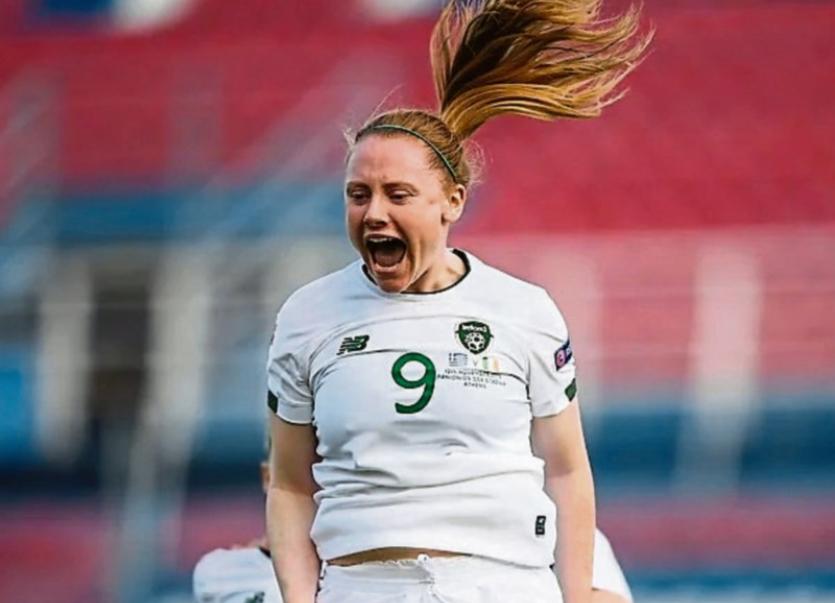 Donegal footballer Amber Barrett is into the fourth week of pre-season training for FC Köln in the German Women’s Bundesliga.

The Rathmullan woman and Irish International is also looking ahead to her second season playing in the German League. The 24-year-old joined FC Köln, one of the leading clubs in Germany, at the beginning of last season after graduating with an MA in Education from Dublin City University.

Barrett has also been included in the Republic of Ireland squad for the vital upcoming games this month in the UEFA Women’s EURO 2021 qualifiers.

The German Bundesliga is a professional league and the talented Donegal woman has taken to the full-time game like a duck to water.

“It was tough at first. It was all new to me training full time which was a big change from training a couple of times a week,” said the former FAI Women’s National Football League and Donegal GAA footballer.

Prior to her departure to Germany she played with Peamount United, one of the leading clubs in the FAI Women’s National Football League

She was a key member of the history making Donegal senior team when they won their first Ulster Senior Championship in 2015.

Donegal defeated Monaghan on a ground breaking day in Clones when the defeated Monaghan in the final. Amber played at full-forward and scored a point in the 2-12 to 1-10 win that ended the Farney ladies reign as Ulster champions.

But now Amber’s focus is on soccer and her new surroundings in Germany: “It took me a while to settle in. It was all new to me. New surroundings, new people, a new language, training full-time as opposed to a couple of times a week and also adapting to the full-time game took getting used to.

“We were playing in the premier division and the pace of the game was must faster and the levels of fitness were at a much higher level.

“It probably took until Christmas before I found my feet and began to get a handle on the language though I wouldn’t say I’m fluent yet. Far from it but now at least I converse in German.

“The club was fantastic and the people of Cologne were lovely all of which made it easier for me to settle in.

“Everything was going well and then in the middle of March and Covid-19 struck and we were shut down for 12 weeks. I had just returned from the International break and Ireland’s game with Montenegro when the lockdown was announced.

“We had no collective training for nine weeks. But the lockdown in Germany was very strict and well policed. The shops were open but little else and I spent most of the nine weeks at home except for going for runs and going to the shops.

“We were all given personal training programmes which occupied a lot of my time and the weeks flew by.”

The Bundesliga resumed at the end of May. Amber, who scored three goals in 15 starts, and FC Koln had three games to play which extended the season into June.

All the games in Germany on the return to action were behind closed doors with no supporters around.

“It was very strange playing with no supporters. We would normally play before crowds of 800 to 1,500 depending on the opposition and whether we were home or away. We naturally had the bigger crowds at home.”

The extended season had a knock-on effect and resulted in a shorter than normal summer break for Amber and all the players.

“The summer break is normally 12 to 13 weeks. But this year it is much shorter; we had just nine weeks off.”

Amber did manage to get six weeks at home in Rathmullan and even got to squeeze in a training session with his former teammates at Milford.

And she admitted she had gone rusty on a number of her Gaelic football skills.

“I had great difficulty kicking the ball over the bar and taking points. But I enjoyed being back playing with the girls. I was invited down by my cousin Marty (Barrett).

Amber returned to Cologne in early August and has three weeks pre-season training under her belt.

“The training has been tough but it's all about building up ahead of the start of the season.

“We’ve also played a couple of friendly games and we will continue to build fitness levels in the coming weeks and play a few more friendly games before the start of the league.

“The league does not start until the beginning of October but we were relegated at the end of last season and the main goal for the season is promotion.

“We finished in 11th place and were one of the two clubs relegated but we came very close to surviving. We drew our last game and if we had won it we would have stayed up.

“So all the focus is promotion back up the top league. It is like all leagues and where all the top teams are and where everybody wants to be.

“FC Köln is one of the top clubs in Germany and the feeling is the top flight is where the club belongs.”

Before Amber and FC Köln swing into action, Amber, now an established member of the Irish Ladies Soccer team, have a big UEFA Women’s EURO 2021 qualifying encounter with Germany.

Ireland face Germany in Essen, on September 19, in one of their three remaining games in the Qualifiers.

They are also home to Germany and away to Ukraine.

Ireland go into that crunch tie on top of the group on the back of a five game unbeaten with four wins and a draw. They are a point better off than Germany, who have a game in hand.

“We’ve had a good run but we still have a lot to play for. Germany are a very good side and we have two big games with them and we are also away to Ukraine in between the two German games,” she said.

Amber has scored one goal in the campaign so far. That was in the 1-1 draw with Greece back in November.

The UEFA Women’s EURO 2021 Qualifiers are made up of nine groups. The nine group winners and the three best runners-up qualify directly for the final tournament. The remaining six runners-up play off for the three remaining places.

Facing into her second season withFC Köln Amber’s short term goals are to nail down her place in the team; start scoring goals and win promotion back up to the top division once again.

It is a similar story with Ireland with qualification for UEFA Women’s EURO 2021 which has been postponed to 2022.

As for long term ambitions she is keeping them very much to herself other than making the grade in the German Bundesliga.

“Look, if someone told me two years ago while I was still in college that two years on I would be preparing for a second season as a full-time professional footballer in the German Bundesliga, I would not have believed it.

“So looking too far forward is a futile exercise. Settling in here and to start scoring goals and making a name for myself is the height of my ambition at the moment.

“If I do that, who knows where it will take me. For now I’m happy and healthy and looking forward to the new season.”