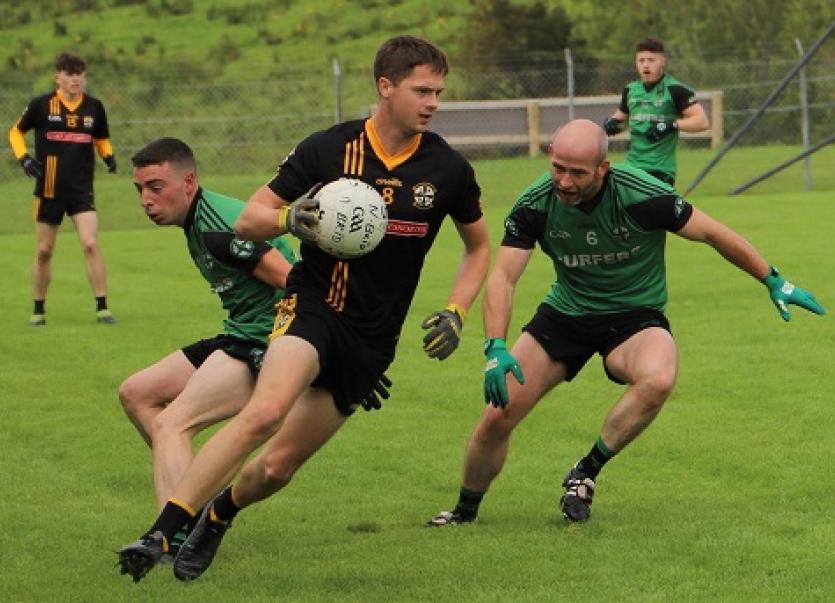 The Ballintra men raced into an early two point lead with Darragh Brogan hitting two cracking points from play, both from 40 meters, on the 2nd and 3rd minute. Naomh Brid then lost big  Tommy Gallagher  to a black card on the 6th minute for a late tackle on Dermot Gallier. The Dunkineely men pushed hard for scores with a long range point from Cian Kennedy keeping a point between the teams ten minutes into the half.

In what was a low scoring first half, Kennedy equalised for the Naomh Ultan men with another great point from the outside of his reliable right foot from out the right wing. Naomh Ultan were dealt a major blow at the water break with Alan Lyons limping off with a leg injury.

Naomh Brid edged in front again through veteran Declan Mc Cafferty who won a great high ball and called the mark. Mc Cafferty kept a cool head and placed the ball nicely over the bar. Eoin Rush was next on the scoresheet with a lovely strike foot from a free out the right wing.

However , it was the men from Dunkineely who finished the half stronger with two points, one from a long range Kennedy free and the other on the run from centre half-back Dermot Gallier to leave the sides level at the break.

In the new half, Naomh Brid sprung the experienced Pauric  Gormley and Shane Walsh off the bench, Gormley replacing big midfielder Tommy Gallagher, who was already on a black card and Walsh replacing Eoin Quinn up forward.

In the new half, Dunkineely had a penalty saved by Pauric Mc Daid in the first minute, when Darragh Murrin’s effort hit off the knee of Mc Daid; this save was a crucial moment in the match.

Shane Walsh, just back playing the last few weeks after a long term injury, proved to be a handful in at full-forward hitting a cracker of a point turning on his left foot 35m out the left wing to give Michael Gallagher’s charges the lead again on the 35th minute.

The lively Ryan Brogan was rewarded for his hard work when he won a breaking ball and got free to point on the run. In the 41st minute a great run by red Daniel Gallagher found Michael Breslin who squared the ball to the lively James Byrne who hit low and hard to the bottom corner giving Mc Daid no chance.

Game on again and the Naomh Brid men clawed their way back into the game with an inspirational score again from that man Walsh with another point from play after a great ball in from Ross Gallagher.  Just after the water break the Trummon men won a kick out mark. Ross Gallager plucked the ball out of the sky and hit a quick ball into Darragh Brogan who set up Declan Mc Cafferty who hit a super strike from 20m out giving Daniel Mc Glynn no chance leaving a goal the difference between the sided on 19 minutes.

Liam Kennedy’s men didn’t lie down and kept fighting; a quick free from the lively Darragh Murrin found Cian Kennedy in acres on his own. Kennedy raced down the middle and hit a super strike from 25m hitting low to the bottom corner.

The men from Naomh Brid hit three points on the trot in a three minute spell with Shane Walsh hitting another beauty followed by  points from Darragh Brogan and Ross Gallagher. Joe Alvey and corner back Liam Duffy traded scores in the dying minutes  to finish the action with three points between the sides at the final whistle.

Michael Gallagher will be happy with his team’s performance with the returning Walsh a major boost to his teams survival. The win ensures they survive at Intermediate level while Liam Kennedy’s charges will now play off with Naomh Colmcille in a final bid to retain their status.