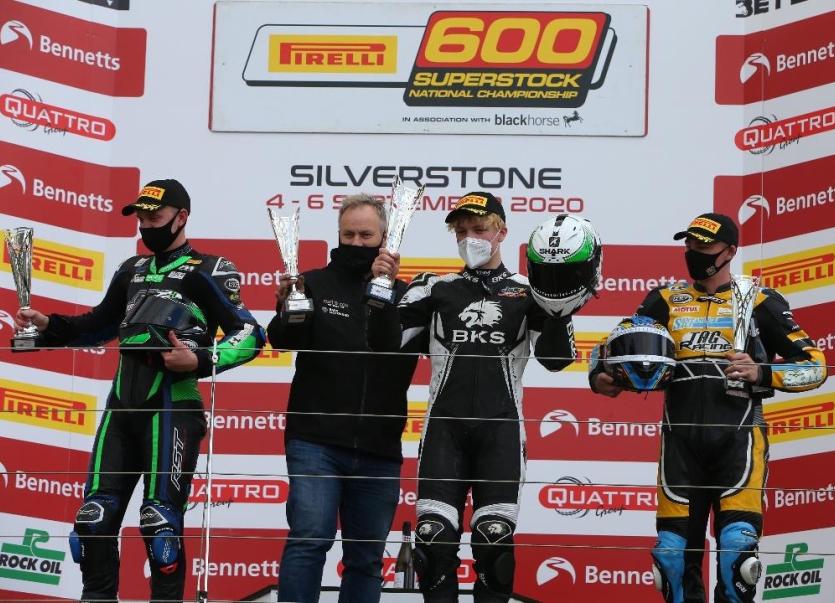 Rhys Irwin travelled to Silverstone Race track at the weekend to compete in the BSB 600cc Championship in high spirits on the back of his podium finish at Snetterton two weeks ago.
Rhys, in his Rookie year, set his sights on a top ten finish and set the pace on Friday's free practice. Qualifying saw Rhys set the fastest lap of the session well under the lap record leaving him in pole position for the race.
In one of the most dramatic races of the season yet saw Rhys drop back mid race with gear box issues until he regained his momentum in the last few laps taking the win by a whisker 0.3 secs.
A jubilant Rhys was beaming from ear to ear in his post race interview (under his face mask) was delighted with his pace now sitting as a real Championship contender in his Rookie learning year.
Congratulations also to Rhys's father Ivan collecting the winning team trophy. Older brother Caolan started the weekend of well qualifying on the front row of the grid alongside his brother he took the lead early in the race unfortunately crashing out on lap six which ended his weekend.
The brothers head to Oulton Park in two weeks time for round four of the Championship. Thanks to all their loyal supporters including Wesley Regan, James Gallagher of Oasis Bar Letterkenny, Denis Sheridan DS Waste Kilmacrennan, Astro Race team, Motorcycling Ireland.