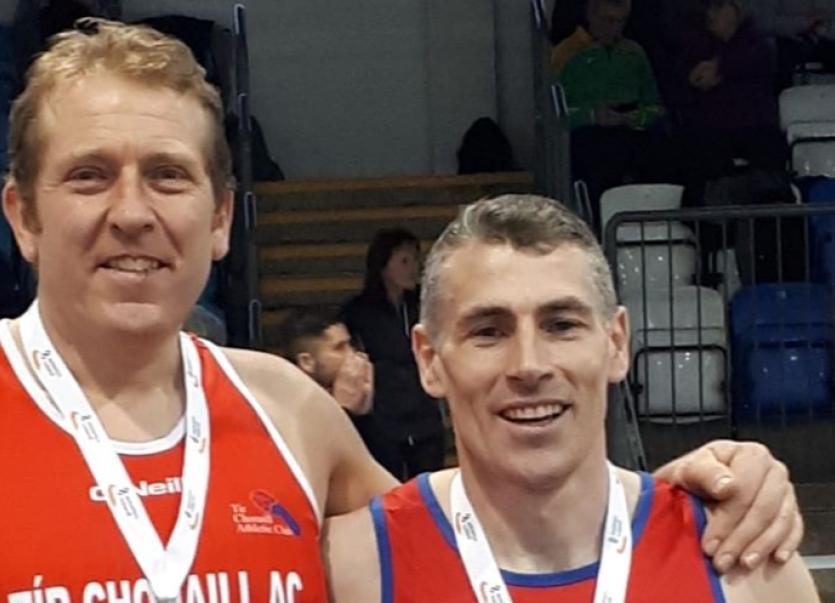 Robert and Martin with their All-Ireland medals

Tir Chonaill athletics club traditionally train in Donegal Town on a Sunday morning. Last week, shortly after 11 am, the various groups halted all activity and gathered around smart phones/tablets to view a club colleague produce a memorable performance. The occasion was the Irish Masters championships; the event was a most competitive M40/1,500m and the athlete was popular clubman and coach Martin Cunningham.
A club mentor described Martin's victory, following a tactical run that included a blistering 59secs final 400m and a time of 4mins 22secs, as 'a a great sporting story' . . . 'from a successful Irish schools/club's double athletics medalist some years ago with Carrick Vocational School, to a successful GAA career with Naomh Columba to the top M40 1500m athlete in Ireland.
Martin returned to athletics a few years ago and gradually returned to competitive fitness as part of supportive club fit4life middle distance training groups.
Later on Sunday afternoon we viewed a closely fought field event competition where less than 40cm separated the top four athletes. Robert Anderson, in the M50 weight for distance, took gold by the narrowest of margins in a discipline that requires in addition to strength no small amount of technique, co ordination and balance.
Similar to Martin, Robert is a valued member of the coaching team at Tir Chonaill AC