Two classic semi-finals in store at weekend in Donegal 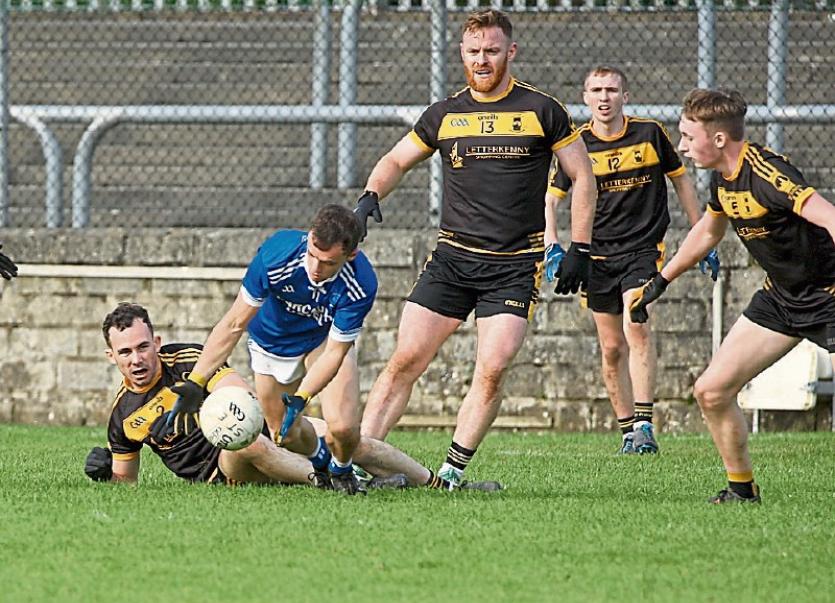 There will be a familiar feel to the fixtures this weekend in the Michael Murphy Sports senior championship semi-finals with the same pairings as last year.

In those games St Eunan's gave Naomh Conaill a real scare, losing out by a point - 0-15 to 1-11 - while goals made the difference for Gaoth Dobhair as they overcame Kilcar by 3-8 to 0-12. Gaoth Dobhair v Kilcar is on Saturday evening in O'Donnell Park at 5.30 with Naomh Conaill and St Eunan's clashing in MacCumhaill Park on Sunday at 4 pm.

Will there be a different outcome this year? It seems to be wide open. The bookies have Kilcar at even money with Gaoth Dobhair 11/10 while Naomh Conaill are slight favourites against St Eunan's, 5/6 as opposed to 5/4. The one constant throughout the league stages and quarter-finals is that champions Naomh Conaill are in a good place, being the most consistent team.

However, if they are without their captain and talismanic midfielder Ciaran Thompson, who had to retire last week with a leg injury, it could make a difference. They have a very strong panel but veterans like Leo McLoone and Brendan McDyer are returning from injury and probably not at full tilt just yet. They are also without big Kieran Gallagher from last year.

St Eunan's are the other team in the county with the strong back-up and it seems as if they are stronger in all departments this year. The arrival of Padraig McGettigan as a full-forward has given them an extra dimension. Even without Conor Morrison, they are able to slot Eamonn Doherty into full-back, probably his best position.

The Letterkenny men looked an average side in the first half against Kilcar back in early August, but they have developed with Brian McIntyre making a huge contribution with his ability to cover the ground. They seem to be getting the balance at the right time.

On Saturday evening the first semi-final will take place with both sides sweating on fitness and availability of players. News from Kilcar is that Brian O'Donnell is unlikely to be fit to take his place at full-back so could we have a renewal of the battle of the veterans - Kevin Cassidy against Conor McShane.

Kilcar turned to McShane last week when O'Donnell went off and could do so again. The other option is to move Barry McGinley to the No 3 shirt. The Towney men, just as they did in O'Donnell Park, were a little casual when they built up a lead against St Michael's last week and almost paid a heavy price.

Gaoth Dobhair, without Odhrán Mac Niallais and Michael Carroll, were very lucky to defeat MacCumhaill's in Magheragallon. Their absence was significant and they have been struggling a little to get into full flow this year. Kilcar have more firepower while Gaoth Dobhair have more know-how.

The four teams left in the Michael Murphy Sports intermediate championship, like the senior, could have been predicted from an early stage.

On comparison with games against Cloughaneely then Naomh Columba should be slight favourites to overcome Aodh Ruadh when they meet in Fintra. The Glen men drew with Cloughaneely away while Aodh Ruadh lost to them at home in a close encounter.

Naomh Columba will want to put last year's game with St Naul's at this venue from their minds when they managed to lose after leading by nine points. However, if Sunday's game is anything like that encounter, then it will be worth watching, even if it is only on TV or on your 'phone.

Aodh Ruadh have played some nice periods of football so far but can also be inconsistent, something that has been with them for a few years. The return of David Dolan, Eddie Lynch and David McGurrin are big plusses this year while Johnny Gethins, Michael McKenna and Philip Patton are their form players.

Naomh Columba have been very consistent. Aaron Doherty has had much more help up front with different players stepping up. Lanty Molloy last week; Ryan Gillespie always a threat and Paddy Byrne gives great back-up at midfield. They also have the experience of Michael Maguire, who will be back on Sunday, and Kieran McBrearty.

In the other semi-final Buncrana will face their first real test. To be fair they have demolished all comers so far but Cloughaneely are a different prospect. The Inishowen men have a good balance and with Darach O'Connor on fire alongside big John Campbell, the Dohertys and Caolan McGonagle, they will not be far away.

Cloughaneely are veterans at this level and were very unfortunate last year. That will be a huge motivational factor, but they will have to be at their best.

VERDICTS: Wins at senior for Kilcar and St Eunan's